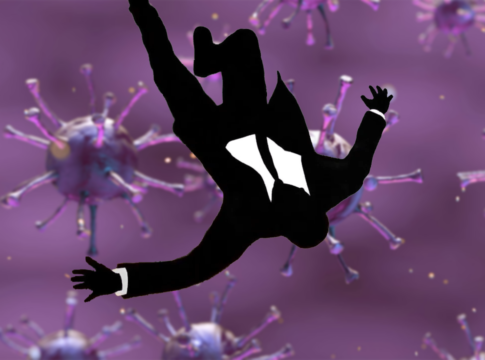 Last week saw, as state and local governments around the country ordered their residents to remain inside as much as possible to contain the spread of novel coronavirus, the time Netflix’s users spent on the platform shot up accordingly. Unable to go out to eat, meet friends for drinks, or go shopping, users have pushed the service’s infrastructure to a breaking point; in our own survey, they reported close to two additional hours of streaming last week, a roughly 28% jump.

Hours previously occupied with in-person socializing giving way to time spent streaming is entirely predictable; less so are the shifts in the actual programming users seem to be seeking out. 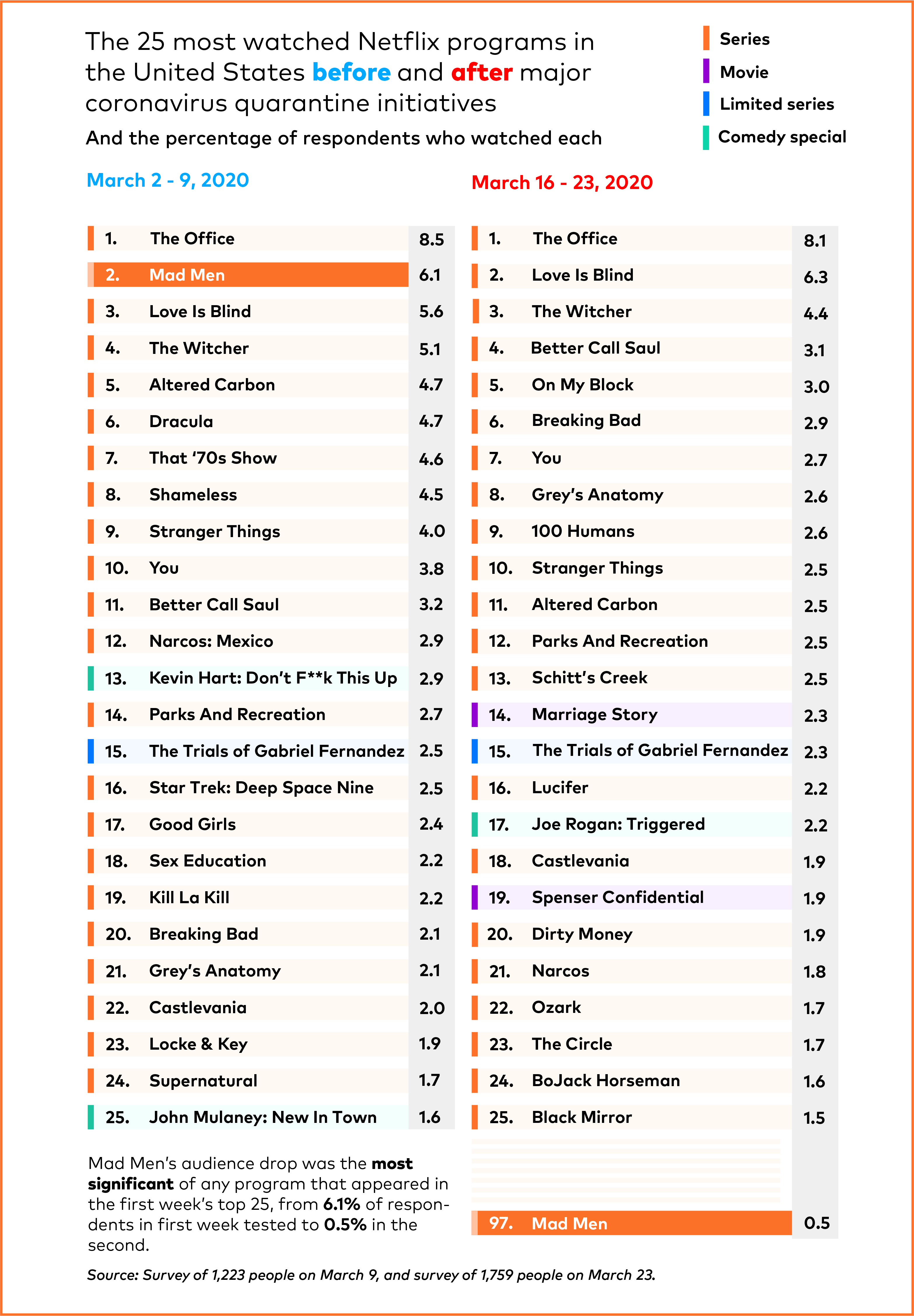 “The Office” has long been among Netflix’s top-performing shows, being viewed more often than any other program on the platform last year. True to form, it remained the top choice for Netflix users last week. “Love is Blind,” the platform’s buzzy reality dating show, ranked right behind it, followed by “The Witcher,” an original fantasy thriller. But more than any other, “Mad Men”, AMC’s perennially popular period drama, plummeted in the rankings, falling below even the likes of Spencer Confidential and “The Circle.” Although you can still find Mad Men streaming on AMC through live TV guides, it’s drop in viewership has not gone unnoticed. While 6.5 percent of respondents in our pre-Covid-19 survey reported watching the show, just 0.5 percent of respondents said they watched it during the beginning of the national quarantine.

It’s not uncommon for the popularity of shows on Netflix to shift significantly week-to-week. “That ‘70s Show” dropped sharply from 4.5 percent of respondents saying they’d watched the show to 1 percent last week, and “Kill La Kill” from  2.2 percent to 0.2 percent. But none of that jockeying for position was as drastic or significant as what befell “Mad Men,” whose significance also follows from its reputation as a show with the sort of syndication immortality as “The Office.” And it’s not necessarily that anxiety about Covid-19 is driving users toward lighthearted fare. Both “Breaking Bad” and its spinoff, “Better Call Saul” rose in our rankings this week, while viewership of “Parks and Recreation” and “Stranger Things” barely budged.

More likely, there’s something about “Mad Men” in particular that makes it a poor fit for this anxious moment. While at times riveting, the show has little of the propulsive tension that makes “Breaking Bad” so bingeable; for all its drama, “Mad Men” progresses at a stately pace, its byzantine plot unfurling in a fashion that demands dutiful, committed viewing. For those who spend most of an episode’s run time glancing at their phones, the subtle turns of “Mad Men” may not quite constitute the distraction they’re looking for. Sure, some viewers may have the wherewithal to focus on the intricacies of “Mad Men” despite whatever else is on their minds, but more appear to be defaulting either to old favorites they can count on for a laugh or plot-driven spectacles that might give their mind something clear to focus on aside from the frantic news cycle inspired by the pandemic.

As more and more people around the United States find themselves placed under shelter in place orders or their equivalents, the time people are spending on Netflix will only go up. The viewing habits that emerge in this period will be a case study for what people seek out for entertainment when they are at their most antsy. From the early returns, it seems clear that however well crafted, overly convoluted shows and movies will not fare well over the next few months. As to what other shifts from typical streaming habits emerge…well, we’ll have plenty of time to wait and find out.