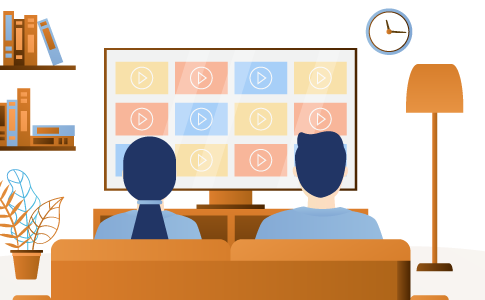 Once upon a time, “cutting the cable” was a much more straightforward process. Picking a streaming platform used to be like deciding between white or chocolate milk with not a lot of choices in between. You could sign up for Netflix, Hulu, and maybe Amazon Prime Video depending on when you joined the streaming game. Beyond that, other options were relatively few and far between.

Today, much like the number of milk alternative options your barista might offer you for a latte, the streaming market has gotten far more complicated. As more content becomes exclusive to Johnny-come-lately streaming providers like HBO Max or NBC’s Peacock, we have to ask ourselves the question: How many streaming subscriptions is too many?

Even with an available streaming TV guide, how hard is it to find something good to watch? To find out, we surveyed over 1,200 people about their streaming habits and how they decide what’s still worth watching. Read on as we break down which platforms are the most popular, which have the best quality content, how many hours people stream daily, and how much time it takes to pick what to watch.

If Netflix wasn’t already the king of streaming, COVID-19 may have helped seal the deal. Around the world, 16 million people signed up for Netflix in the first quarter of 2020, twice the number of new subscribers they picked up in the last quarter of 2019. 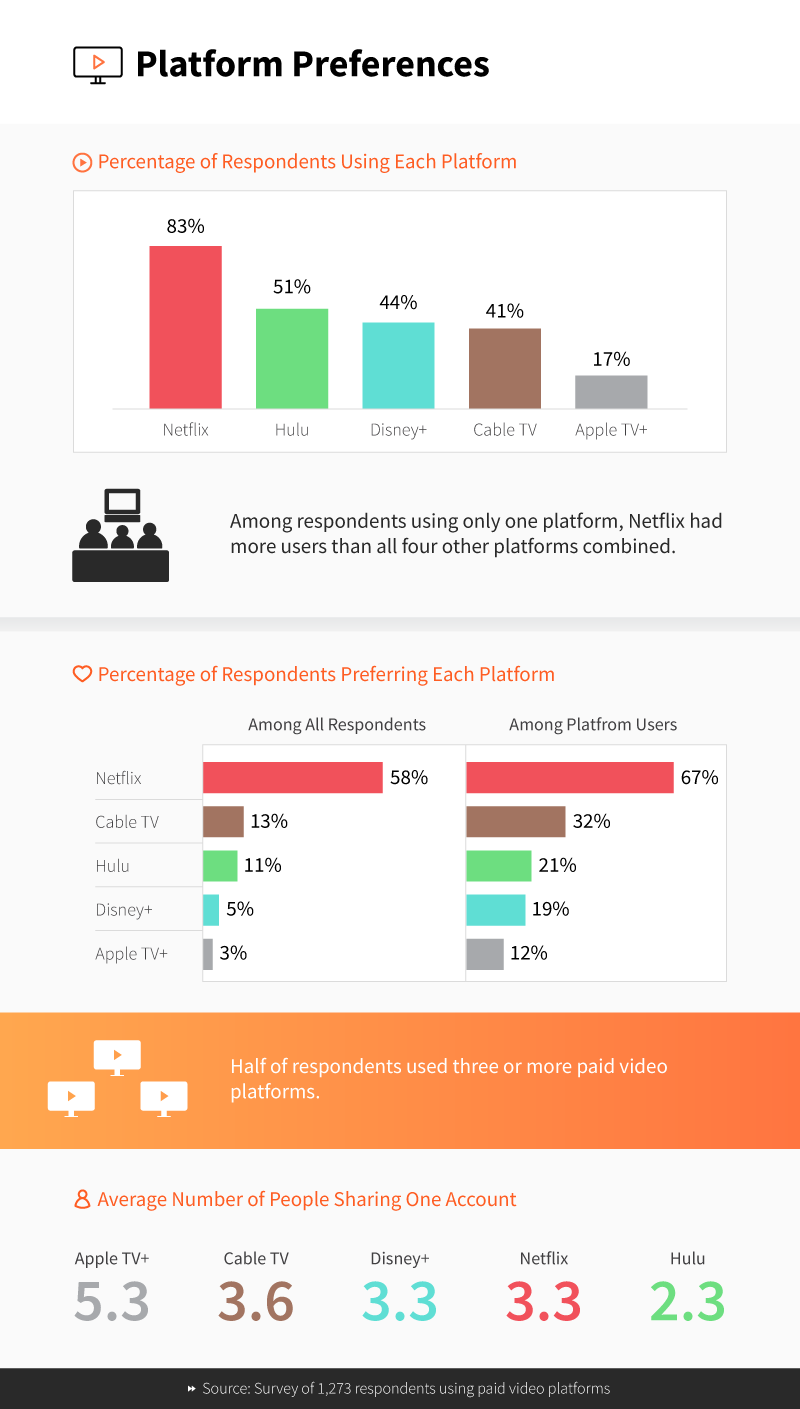 If you wanted to keep up with all of the Tiger King memes that coincidentally seemed to kick off a season of lockdown and self-quarantine, you needed an active Netflix account to understand what all of the “kittens” fuss was about. Netflix also happened to be the most popular streaming platform among people we polled – 83% of respondents reported using the service.

Along with Netflix, Hulu (51%) and Disney+ (44%) were both more popular than cable TV. Only one streaming platform failed to garner more popularity than cable programming: Apple TV+. Apple is rumored to have spent over $6 billion on their initial programming, but may still have more work to do to match the viewership of Netflix, Hulu, or Disney.

Netflix was also the preferred platform among both all respondents and users of each platform, while Hulu, Disney+, and Apple TV+ were all less likely to be preferred over cable TV programming. While half of people polled used three or more paid streaming services, those paying for Apple TV+ had more than five options to pick from on average.

Even though many people pay for three (or more) different streaming platforms, not all content is created equally. Netflix wasn’t just voted as the most popular streaming service, users considered it to have the best quality content, variety of options, and overall user interface. 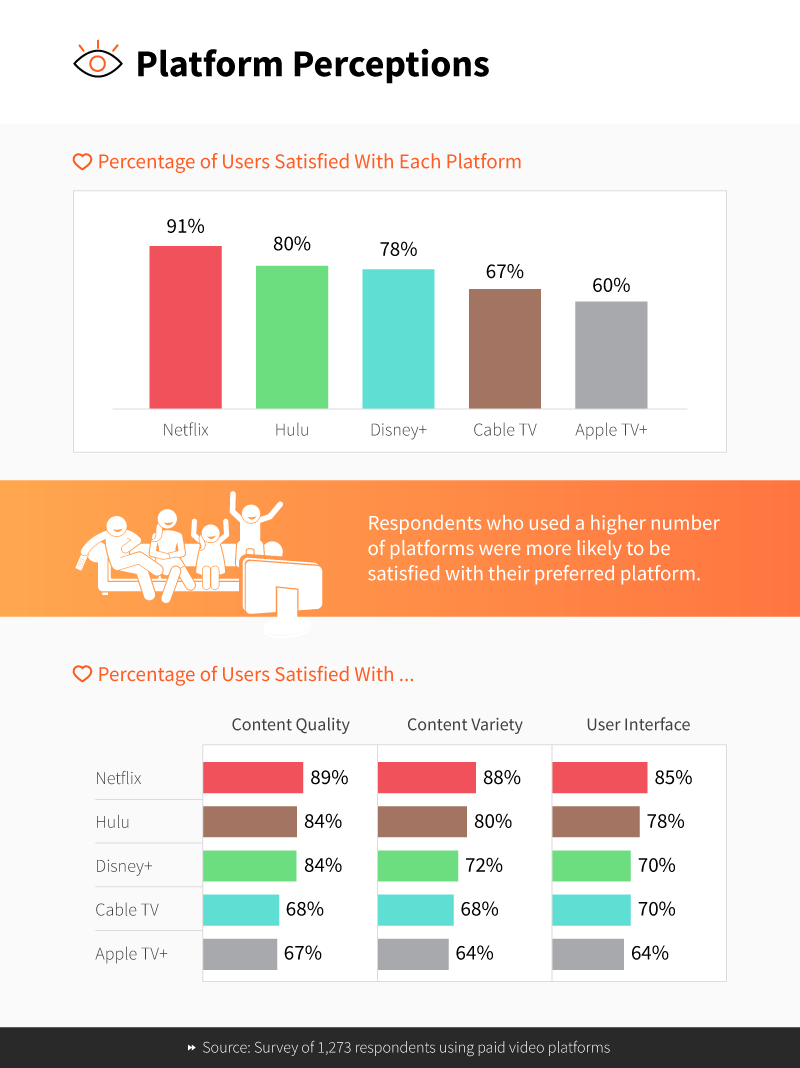 Overwhelmingly, 91% of users were satisfied with Netflix as a streaming platform, followed by Hulu (80%), Disney+ (78%), and cable TV (67%). Apple TV+ was once again in last place with just 60% of users satisfied with the tech giant’s streaming service. Not only was Apple TV+ seen as having the worst quality content (60%), users indicated it had the least amount of variety (64%) and the most unfriendly user interface (64%). Despite the big name talents Apple TV+ brought along for its debut programming, some experts have claimed Apple TV+ is never really going to happen.

In contrast, 89% of users voted Netflix as having high content quality, and 88% of users indicated Netflix had a satisfying variety in their library of movies and shows. While Hulu and Disney+ were tied in the quality of their content (84%), users were eight percentage points more likely to vote Hulu as having sufficiently diverse offerings.

Are You Still Watching?

Users have strong opinions on which platforms continue to be worth the rising cost of keeping them, but people are still spending multiple hours every day watching programming on the various providers they’re subscribed to.

With the exception of Disney+ (2.7 hours), users with Netflix, Apple TV+, Hulu, or cable TV spent three hours or more watching content every single day. Cable TV earned the most weekly usage (over 6 days), followed by Netflix and Hulu (5.5 days), on average.

Still sitting at the top of the leaderboard, Netflix was ranked as the easiest platform for exploring new content (85%). Only Hulu was seen as slightly easier (two percentage points) to navigate if you were searching for something specific. Apple TV+ earned the lowest ratings for both the ease of exploring new shows (57%) and the ease of searching for something specific (55%). For those looking to discover something new, half of people found trailers that autoplay annoying, but a quarter of people wound up watching something because of those autoplayed trailers.

Despite being so popular and well regarded, Netflix programming may not always be a smash hit. Forty-seven percent of people felt there was nothing to watch when browsing Netflix at least once, and another 33% had previously discovered something that looked bad but were willing to watch anyway. More than any of the streaming platforms, 68% of people had felt there was nothing worth watching on cable TV, and 64% of people admitted to turning off cable TV while browsing and switching to an alternate platform.

On a positive note for the platforms, users were least likely to discover an absence of good options when browsing Apple TV+ and Disney+.

There are only so many hours in a day, which means no matter how much binging you do, you’ll never have enough time to watch everything. Even the process of trying to narrow down the array of options into something you’ll enjoy takes time, with users spending 24 hours annually searching for content to watch on the various streaming services.

Unlike some other options, Apple TV+ doesn’t have a wide selection of licensed content for viewers to watch, but it still took longer for people to find something they’d enjoy when looking for new content. With Apple TV+ averaging 16 minutes, users were able to explore new content faster on Disney+ (11 minutes), Netflix (10 minutes), and Hulu (9 minutes) compared to Apple TV+.

While you might find something new in a matter of minutes on most platforms, nearly 1 in 3 people admitted to spending 30 minutes or more deciding what to watch at least once, and close to 1 in 10 people spent an hour or more deciding what to watch on at least one occasion. Relying on the platform to make a quality recommendation for you? The Netflix (69%) and Disney+ (58%) algorithms were voted the most satisfying, with cable TV earning the lowest positive response (40%).

Instead of hoping the platform would help them find something worth watching, a majority of people relied on word-of-mouth recommendations from friends and family (84%) and romantic partners (52%). Professional opinions were the least valuable, with just 38% of people believing critic reviews were a good source for viewing recommendations.

There may be a few too many streaming options to pick from these days, but many of them are still seen as better than settling for cable TV. On average, people were more likely to prefer the content and the interface of Netflix, Hulu, and Disney+ to cable, though Apple TV+ often fell short of similar streaming options.

If you’re ready to ditch your cable subscription, Flixed can help you discover exactly which subscriptions you need to watch the movies, shows, and content you love. By identifying your favorite channels, which live sports you can’t live without, and the devices that you already have access to, Flixed will help you decide exactly where you fall in the streaming wars. Cut the cord and all the unnecessary accounts at Flixed.io today.

For this study, we surveyed 1,273 respondents who used paid video platforms. Survey quotas were used to ensure a sufficient sample size of respondents who used and preferred each streaming platform were included. To help ensure that respondents took our survey seriously, all respondents were required to identify and correctly answer an attention-check question.

In some cases, questions and responses were rephrased for clarity or brevity. These data rely on self-reporting, and statistical testing was not performed on these findings. Potential issues with self-reported data include, but are not limited to, exaggeration, selective memory, and attribution errors on the part of respondents.

Are your readers spending more time than ever streaming content from home? Help them take a stand in the streaming wars by sharing the results of this study for any noncommercial use with a link back to this page in your report.