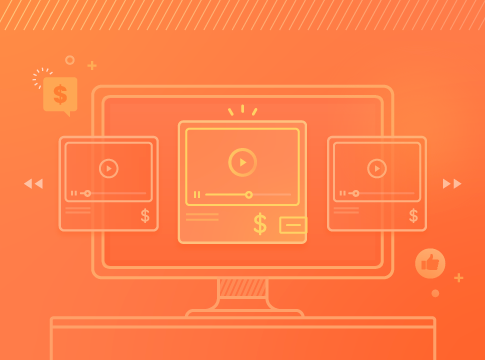 Cable giants continue to bleed customers, with 3.2 million subscribers electing to cut their cords in 2018. And future figures promise to be even direr as streaming services offer robust cable alternatives at attractive prices.

As this trend threatens to upend the entertainment industry, it’s clear that many customers are abandoning cable in pursuit of lower costs. But does cord cutting actually offer better value overall, supplying viewers with the content they enjoy without bloated packages? By the same token, do streaming-only households miss aspects of the cable experience, predictable programming and TV streaming guides, once they make the switch?

We took a deep dive into TV cable versus online streaming subscriptions, surveying 1,277 viewers on both sides of the divide. Our findings probe rates of satisfaction among both streamers and TV cable subscribers, exploring the motives behind each choice. Then, by analyzing respondents’ monthly cost and watching habits, we determined which group is getting the better deal. Considering cutting the cord yourself? You won’t want to miss what we uncovered. 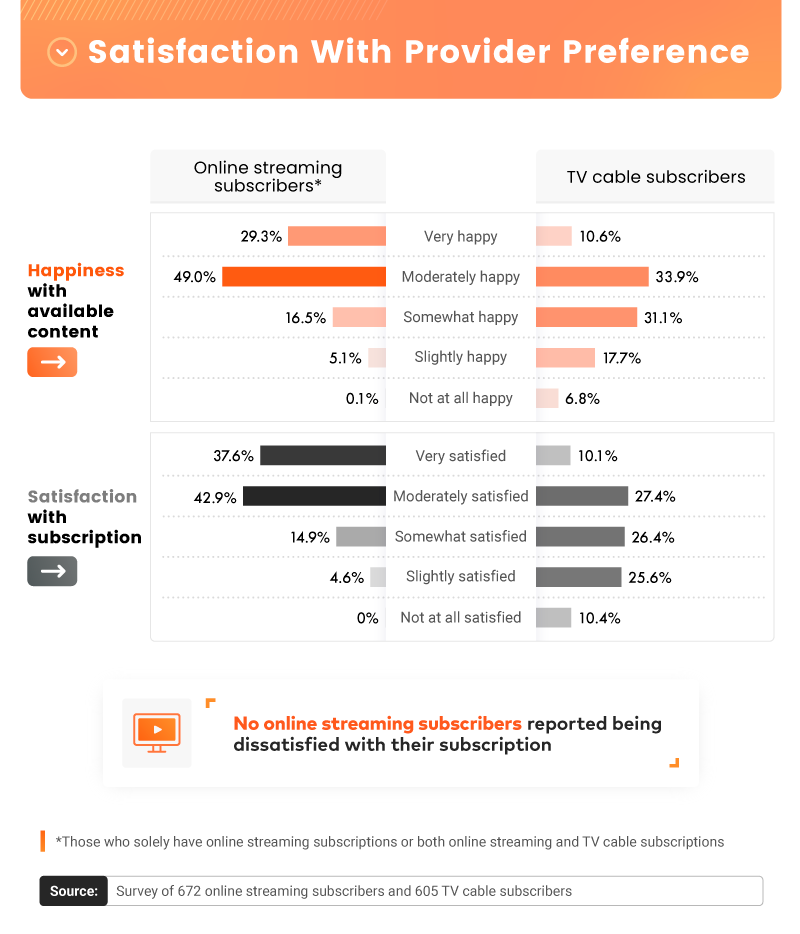 When asked about the content provided by their online streaming services, nearly 4 in 5 respondents described themselves as “moderately” and “very” happy with the entertainment selection. This finding likely speaks to the massive production budgets of streaming giants: With Amazon Prime Video and Netflix pouring billions into original projects each year, viewers never lack for options.

Additionally, online streaming platforms offer robust content libraries dating back decades, catering to nostalgia in ways TV cable cannot. This may explain why enthusiasm was more muted among cable customers: Fewer than half described themselves as “moderately” or “very” happy with the content available.

These feelings about content seemed to carry over to general satisfaction: About 80% of online streaming customers said they were “moderately” and “very satisfied” with their subscriber experience. Conversely, fewer than 40% of TV cable customers fell into these categories. The cable industry’s problems extend well beyond issues of content, however. In national consumer surveys, major cable companies routinely receive rock-bottom rankings for customer service. 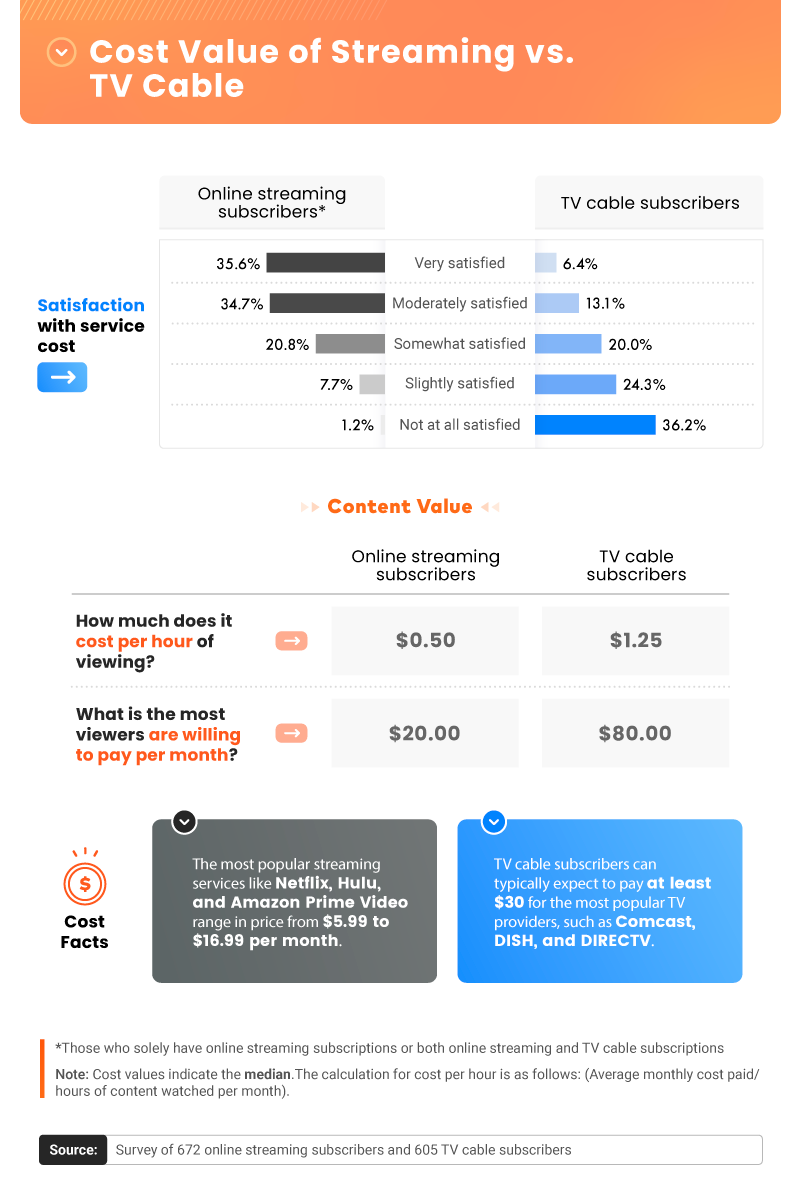 Despite their high rates of customer attrition, TV cable companies continue to raise prices, increasing both monthly base costs and frustrating add-on fees. This trend is not lost on customers: 36% reported they were “not at all satisfied” with the cost of their TV cable services. Meanwhile, just 6% said they were “very satisfied” with the price they paid each month.

To be fair, some online streaming services have also raised prices in recent years: YouTube TV, for example, increased its monthly rate by $10 in 2019. But the majority of streaming customers were relatively content with their subscription costs, with more than a third describing themselves as “very satisfied.” Compared to TV cable, at least, streaming can feel like a steal, with monthly fees of less than $20 in most cases. 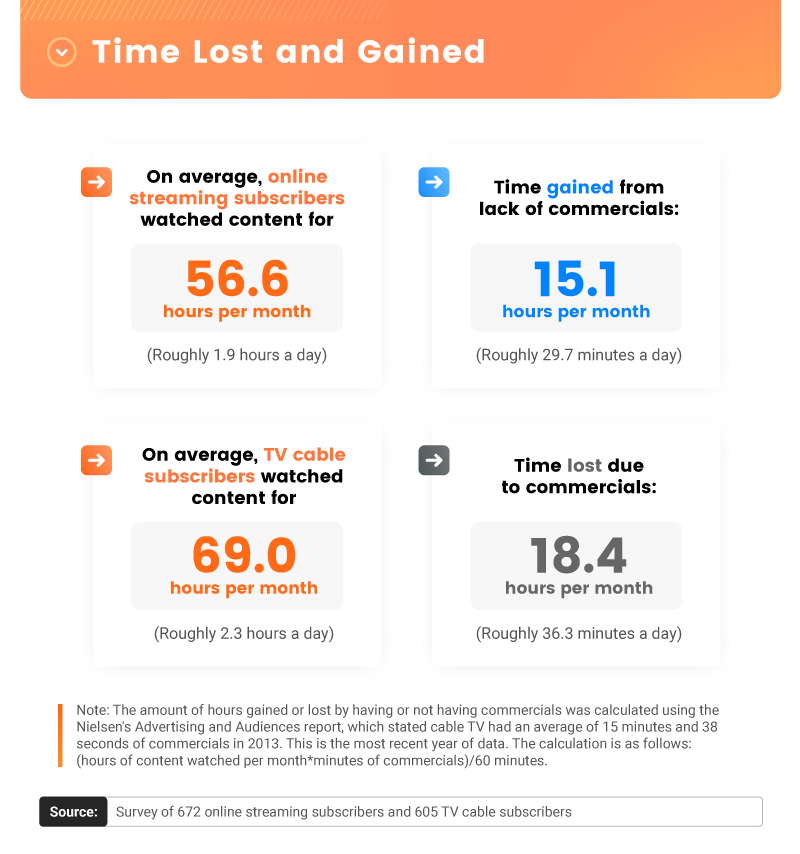 Some streaming options do rely on ad revenue: Certain Hulu plans, for example, show viewers commercials in exchange for lower subscription costs. Yet, for most streaming enthusiasts, the absence of ads is a major advantage, with no sales pitches to disrupt their viewing pleasure. What some don’t consider, however, is how removing commercials improves viewing efficiency, potentially saving customers considerable amounts of time.

Take the typical online streaming subscriber who watches 56.6 hours of content per month, according to our data. Given the usual ratio of commercials to content, these streamers are saving roughly 15 hours each month by avoiding ads – or about half an hour each day. That time could easily be applied to other rewarding pursuits: For example, the average American reads just 16 minutes a day and spends just 17 minutes exercising.

Conversely, TV cable subscribers spent more time watching every month – perhaps because they were forced to sit through commercials. Indeed, cable customers lost more than 18 hours a month to ads, on average. In a world where so many feel overwhelmed by their competing obligations, this wasted time is no small sacrifice. 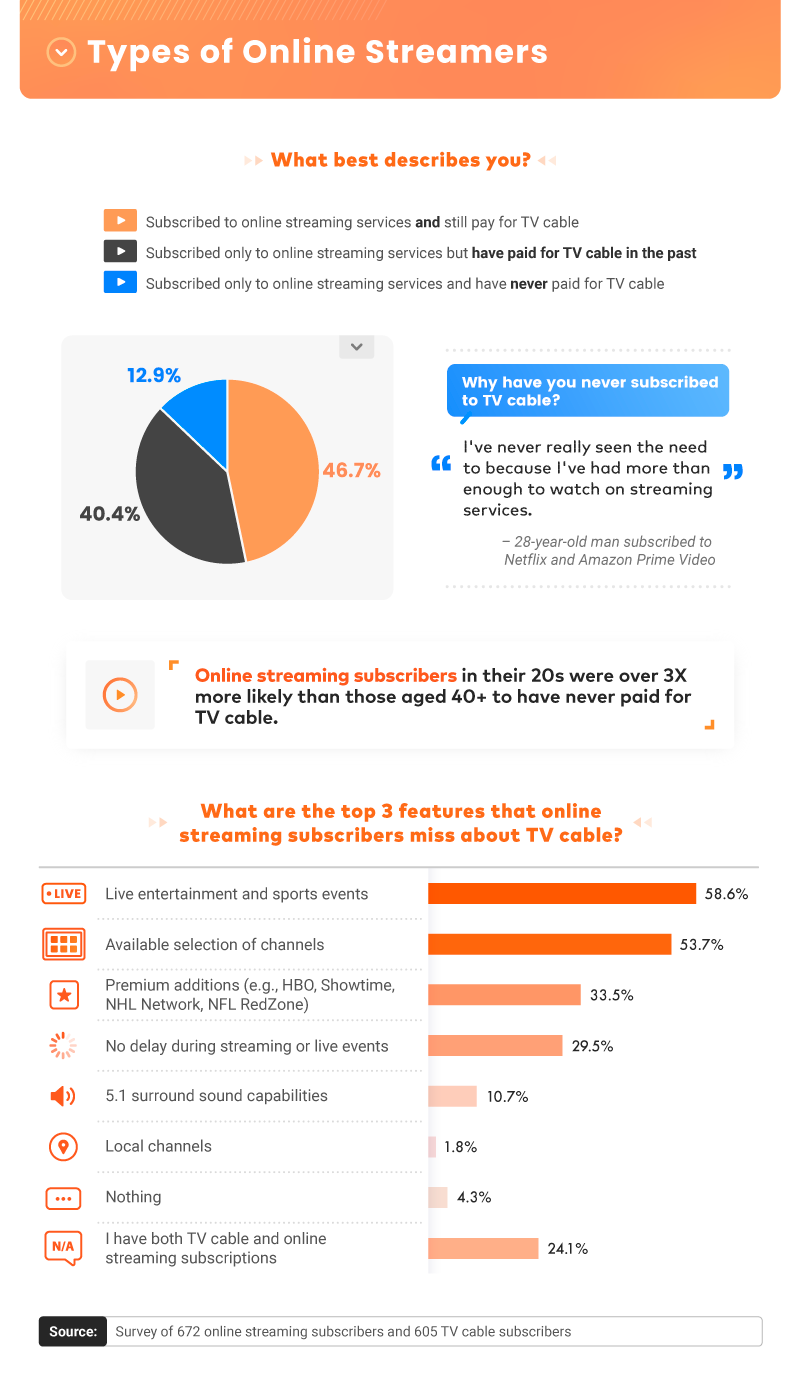 Even those who enjoy streaming platforms are sometimes reluctant to eliminate TV cable entirely. In fact, a plurality of our respondents said they maintained both types of services simultaneously, although doing so can prove costly.

Another 40% had fully cut the cord, ending their TV cable services in favor of online streaming platforms. Additionally, nearly 13% had never paid for cable, always choosing to stream exclusively. These so-called “cord nevers” tend to be quite young – even members of Generation Z in many cases. Among our respondents, subscribers in their 20s were three times more likely to say they’d never paid for cable than people aged 40 and over.

Of those who had moved from cable to streaming, however, many missed certain perks of their former providers. The top complaint among cord cutters was the absence of live entertainment and sports events, although these kinds of content are increasingly available through online streaming services as well.

Limited channel selection was another frequently cited shortcoming. While nearly every channel is available on some kind of online streaming service, you may not find all of your favorites on a single platform. The good news? Buying multiple streaming subscriptions often costs less than purchasing a single cable package. 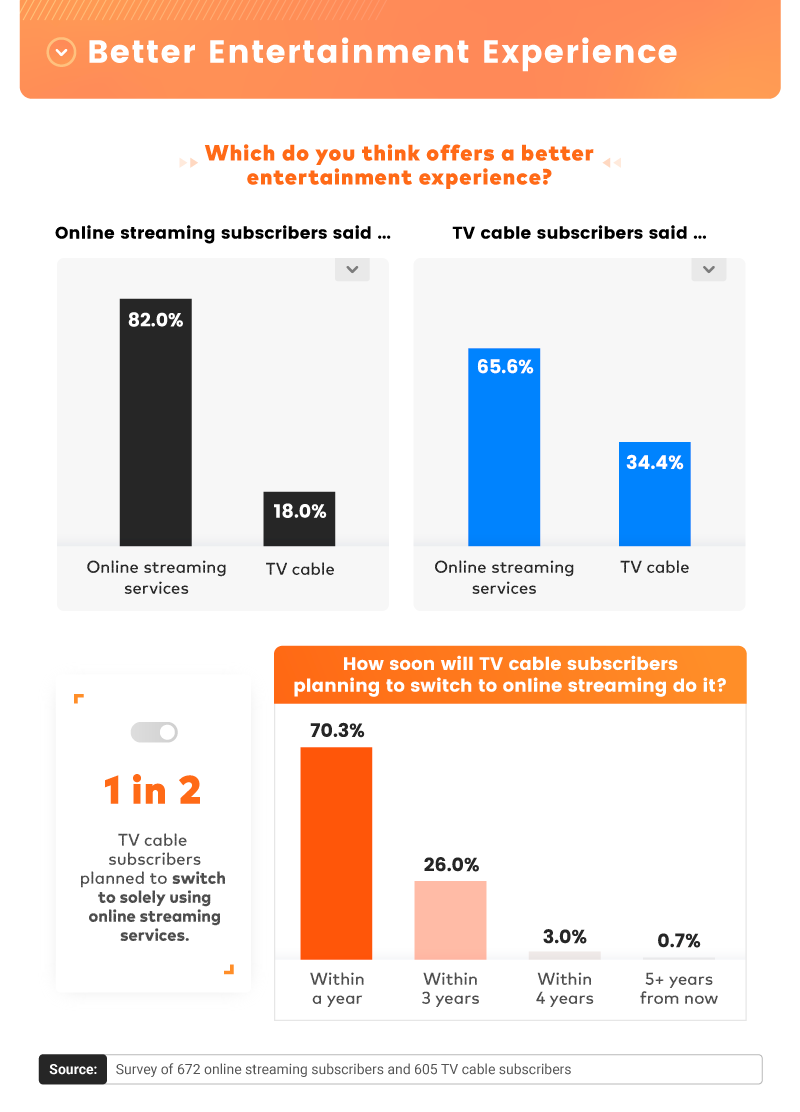 In our most devastating finding for TV cable providers, the majority of respondents said that online streaming services offered the better entertainment experience. This sentiment was particularly strong among online streaming subscribers, 82% of who preferred online platforms to traditional TV.

Yet, two-thirds of TV cable customers also believed that streaming provided a superior entertainment experience. And as you might expect, this recognition had many cable subscribers looking to jump ship soon.

Among current cable customers, half said they planned to switch to streaming. In fact, over a third of cable customers planned to cut the cord in the next year. In light of this dawning reality, some communications corporations are reckoning with a new business paradigm: ditching TV altogether and focusing exclusively on providing internet services. If our findings are any indication, this radical strategy may be their only path to survival.

This analysis presents a compelling case for cord cutting, with positive sentiment about online streaming platforms far exceeding TV cable enthusiasm. While streaming subscribers pay far less for the content they consume, they tend to enjoy what they watch to a greater extent than cable customers. Many households are catching on to this cost calculus and soon plan to sever their cable contracts. This move may produce significant savings on a monthly basis – without sacrificing access to high-quality entertainment.

The switch to streaming, however, presents many possibilities. One of the advantages of cutting the cord is exceptional flexibility: You can choose among each platform’s various plans, or pair them together for customized content consumption. But poring over your streaming options can feel overwhelming, so let us guide you toward the optimal solution. Flixed helps you select all the entertainment you want and then recommends the most cost-effective blend of streaming services. Try our tools now for suggestions customized to help you cut the cord.

For the graphic titled “Cost Value of Streaming vs. TV Cable,” the cost per hour was calculated as follows: (average monthly cost paid/hours of content watched per month).

The data were not statistically tested.

If your friends and family are still clinging to cable, we invite you to share this project to help them see things differently. When it comes to using this content, though, we just have two requests. First, please use our work purely for noncommercial purposes. Second, we’d really appreciate a link back to this page, allowing others to find and explore this project in its entirety.