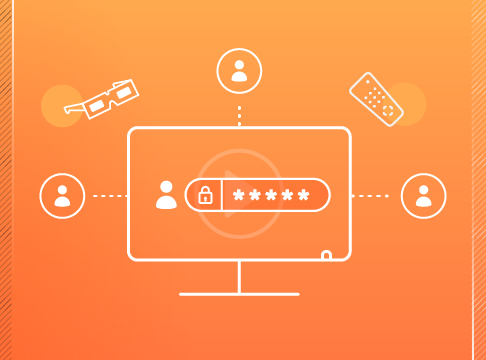 For how popular streaming services like Netflix and Hulu are today, you would think there would be a consensus about how to use the platforms safely and securely. But with streaming password sharing being so rampant, we wanted to learn just how safe the average user is when it comes to their online security.

We started by surveying 1,000 people currently using at least one streaming platform. We asked them whom they shared their passwords with and how recipients used that sensitive information. To our surprise, friends and family often put one another at risk. Even bank information was connected to streaming. Whether you’re currently using or considering using a streaming service, keep reading to learn from hundreds of others who already utilize these platforms. 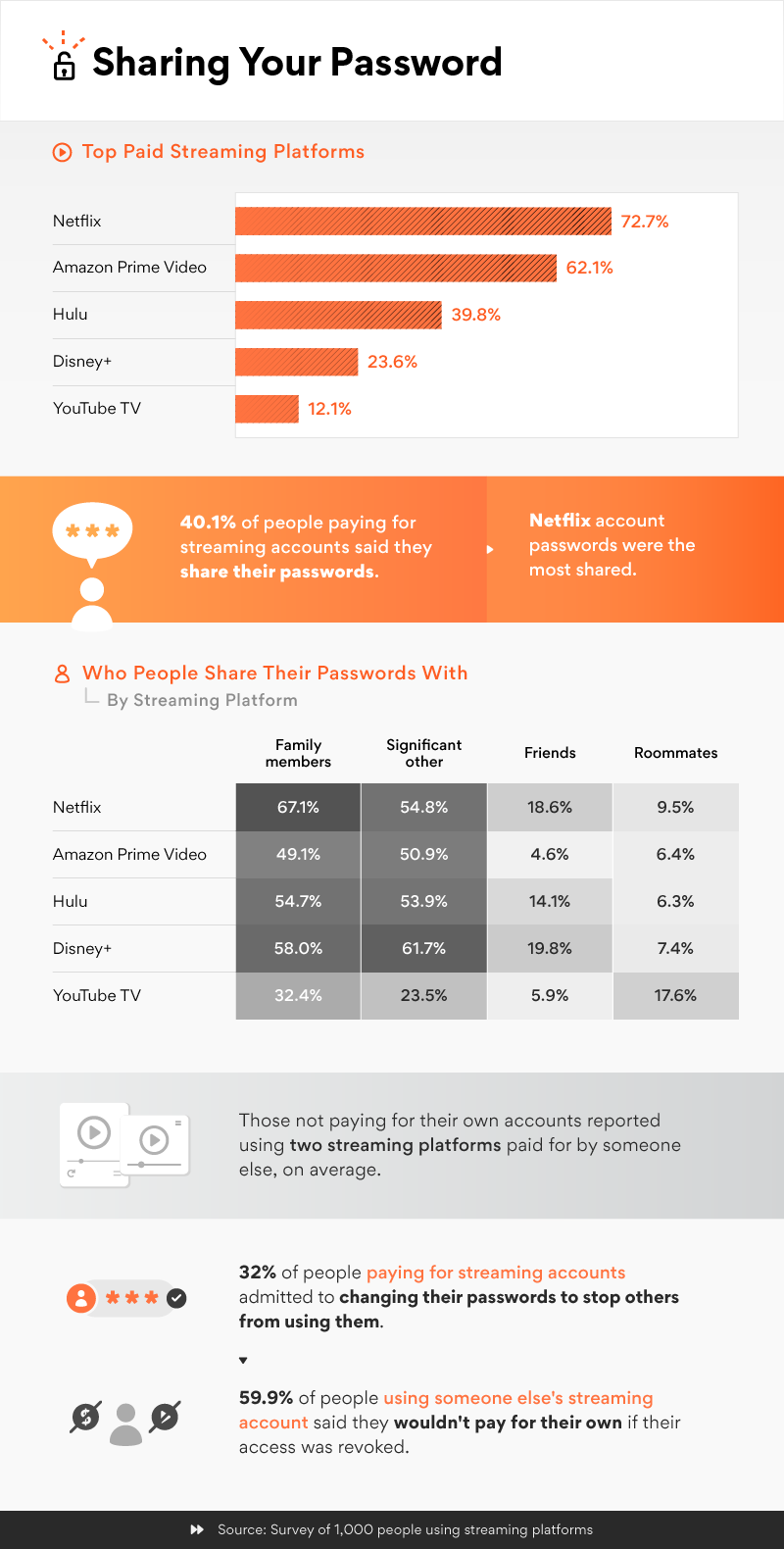 There are over 200 available streaming services, but Netflix is, by far, the most popular. Of our 1,000 participants, 72.7% paid for Netflix access. Amazon Prime Video took a not-so-close second, with 62.1% paying for this platform – perhaps on a per-title basis or through Amazon’s $119 annual Prime membership. Hulu and Disney+ were popular as well but were paid for by less than half of those we talked to.

Regardless of the streaming platform, though, 40.1% of those paying for an account shared their password with an average of two nonpaying users. Netflix was most often shared with family members. The platform does seem to encourage this behavior – even its terms of use asks only that users not share “beyond your household.” That household could technically include family members, a significant other (to whom 54.8% of users also gave their password), friends, and even roommates.

But sharing the Netflix password with a significant other was not as common as sharing the Disney+ password with a romantic partner. Nearly 62% of Disney+ subscribers gave their password to their partner. According to Business Insider, Disney+ enables four users to stream simultaneously, which works perfectly for families or larger sharing groups. This was also the most likely user base to give their password to friends – 19.8% reported doing so.

Reasons for Not Sharing 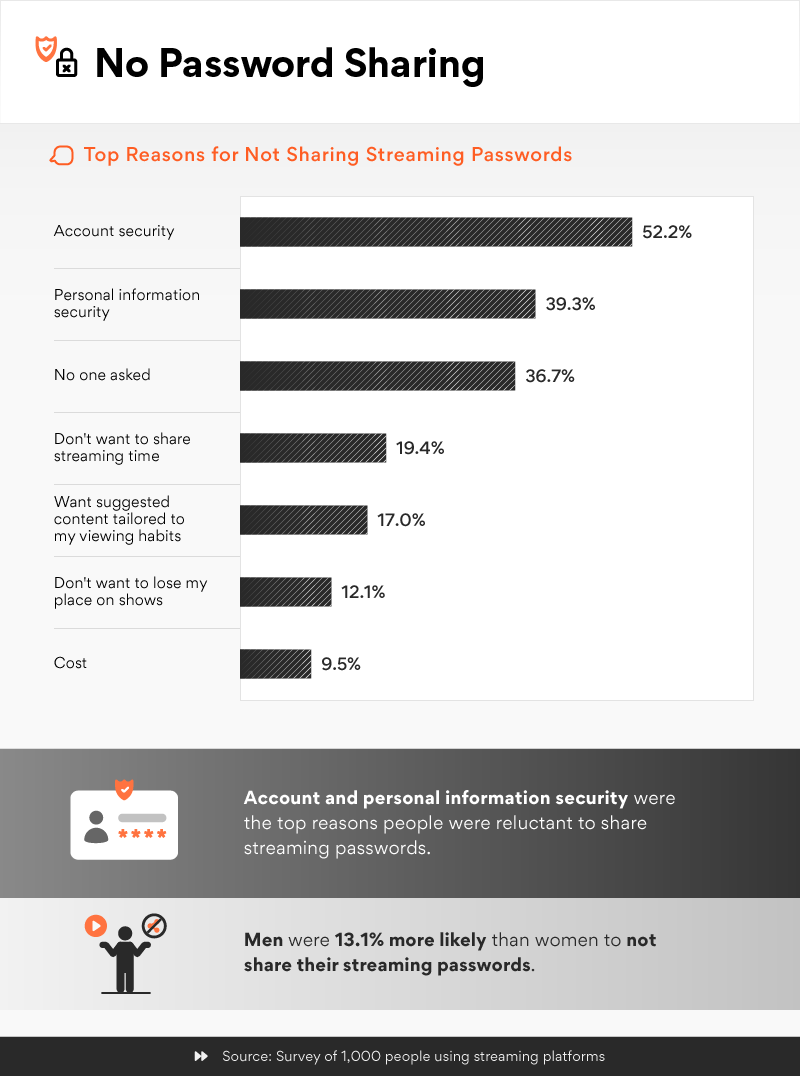 When people did choose to keep their passwords to themselves, some reasons for doing so weren’t in the name of security. Although 52.2% of nonsharers said their concern was the security of the account, a substantially smaller percentage was concerned about the safety of their personal information. We even heard that no one had requested a password. Nineteen percent also didn’t want to share their streaming time (the basic Netflix package only enables one stream at a time), and more than 1 in 10 were concerned about losing their place if somebody else were to log on. 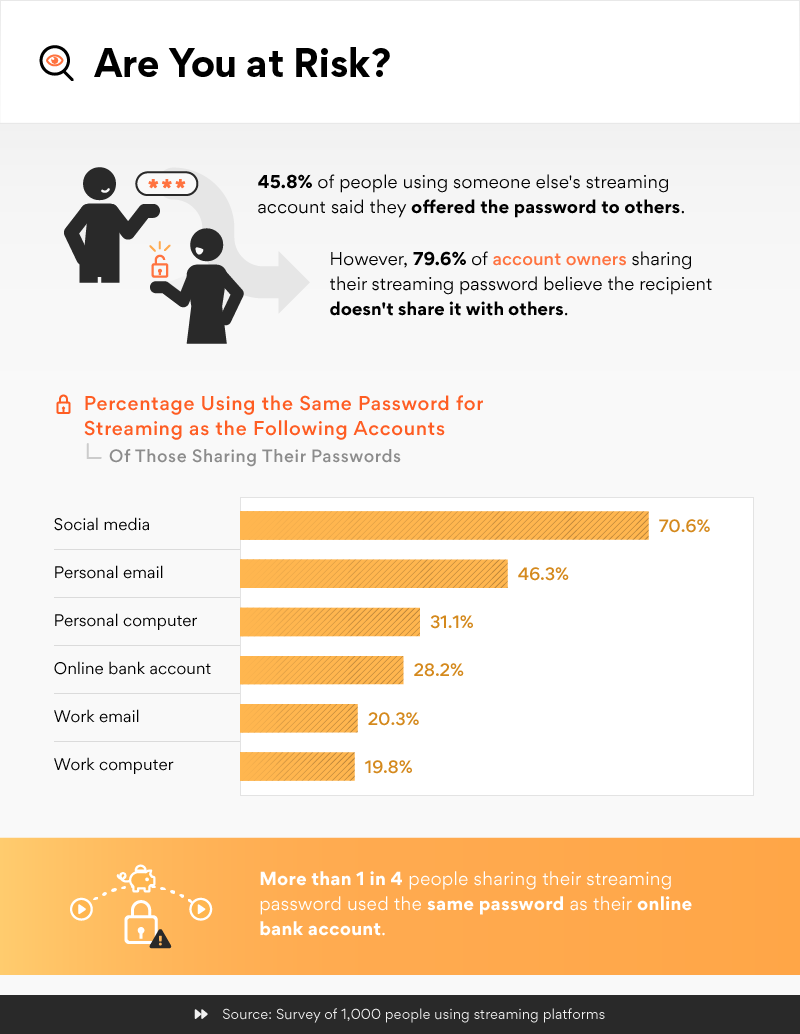 If you share your password, you have nearly a 50-50 chance that the same password will be shared with others. Forty-six percent of those currently using someone else’s account admitted they had given the login information to others, despite 79.6% of account owners believing this didn’t happen. If these new and unknown users don’t create a profile on the account, their use of the platform could continue virtually undetected.

But password behavior got even riskier. Of those who did share their streaming password with others, 70.6% used the same password for at least one of their social media accounts, which puts their privacy greatly at risk. Moreover, social media accounts can often be used to log into other apps and services, which some experts suggest is a clear security risk.

Perhaps the most brazen security risk, however, was the 28.2% of sharers who divulged the same password that belonged to their online bank account. This means that more than 1 in 4 people essentially gave out their bank information, which was often shared with others. It might be time to set up two-step verification for whichever online banking service you use. 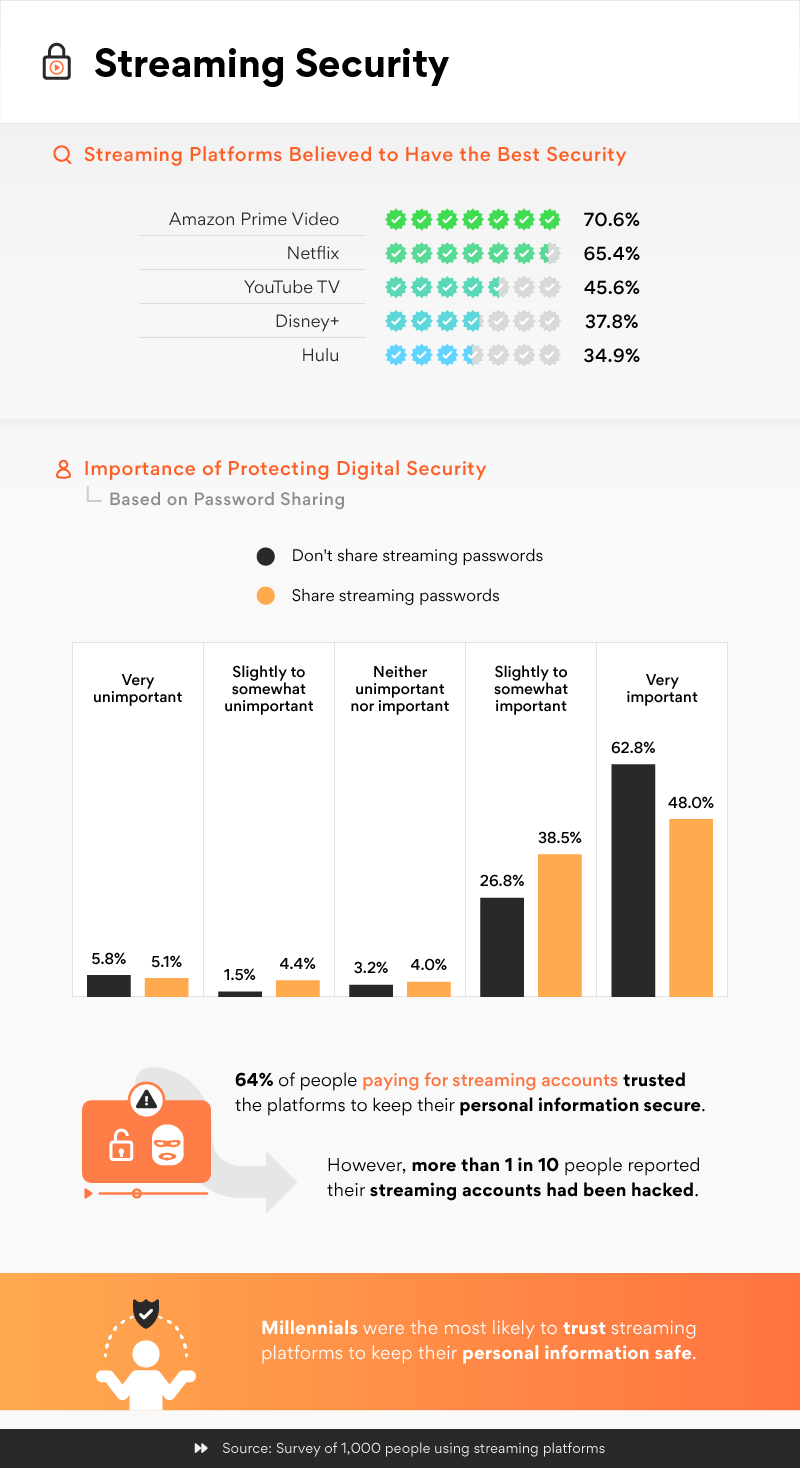 In terms of this study, streaming sometimes correlated with security breaches. More than 1 in 10 respondents told us their streaming accounts had been hacked. And this is despite the immense amount of trust they put behind each service. Sixty-four percent of account owners told us they trusted streaming platforms to keep their personal information secure. And millennials were even more likely to trust them.

The most popular platform, however, was not the most trusted. Instead, Amazon Prime Video was the most trusted, with the good faith of 70.6% of respondents. Perhaps this comes from the fact that Amazon enables users to order so much more than TV shows and movies. A person can buy a new fridge or Rolex watch with free delivery through Amazon Prime, which might have users trusting Amazon to bump up its security. Netflix was the only other platform to be trusted by more than half of users to keep their personal information safe. Only 37.8% of people thought Disney+ would do the same.

As our study revealed, it’s not streaming platforms necessarily putting you at risk. It’s human behavior. If you do want to share your password (as most seem to ultimately do), create a password that is distinct from your social media and other accounts – especially your banking account. And don’t assume that the password won’t be shared with other people.

The purpose of these platforms is ultimately entertainment and enjoyment! So, we’d like to help you make the right choice. At Flixed, we can help you ditch your expensive, outdated cable subscription and find services right for you, your family, and your friends. Depending on the channels you like to watch and where you live, you can rely on our team of experts to connect you with a new chapter of entertainment. We even provide an extensive TV streaming guide that gives you detailed broadcast times down to the local level.

To collect the data shown above, we conducted a survey of 1,000 respondents. To qualify for this survey, respondents were required to use streaming platforms to watch content. Of the respondents, 686 paid for their own streaming accounts, while 314 used someone else’s. The respondent pool was 50.8% female, 48.9% male, and less than 1% identifying as nonbinary. The data were calculated to exclude outliers. We did this by finding initial averages and standard deviations for the data. Then, the standard deviation was multiplied by three and added to the initial average. Any data point above the calculated number was then excluded from the data.

Because the survey relies on self-reporting, issues such as telescoping and exaggeration can influence responses. An attention-check question was included in the survey to help ensure respondents did not answer randomly.

Knowledge represents streaming security in this scenario. So, spread the word online, but be sure your purposes are noncommercial and you link back to this page.