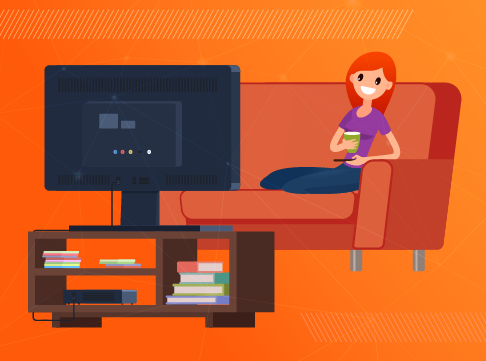 According to Gallup’s Global Emotions Report, the majority of people living in the U.S. experienced frequent stress in 2018. Others expressed feelings of worry and anger. Although stress is a normal part of life, what Americans seem to be dealing with is chronic, which is worrisome as experts find that “unremitting stress exacts a stunningly toxic toll on the body, brain, mind, and soul.”

But there are ways to cope with stress. Maybe a brisk walk to get the blood flowing, calling a favorite aunt for a cathartic chat, or watching an episode of a show that brings you joy. In a recent survey, we asked 1,017 Americans about their stress levels. We found that for people with at least one streaming service, sitting down to watch shows and movies was one way they escaped from life’s daily pressures. Read on as we explore how long people spend streaming to alleviate stress and which content they choose.

Not Too Stressed to Stream 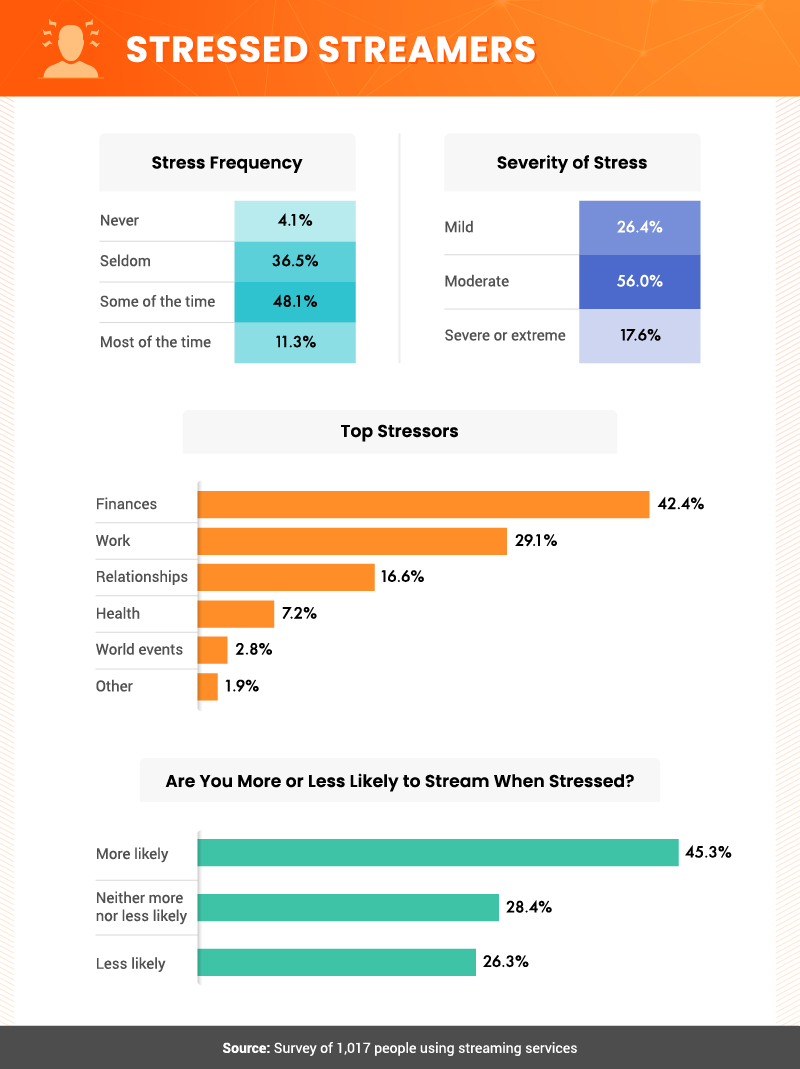 A majority of Americans (42.4%) reported that finances were their top stressor. Just over 29% of people in our study said work was the main thing causing them to feel stressed. Following that, survey participants worried about their relationships (16.6%), health (7.2%), and world events (2.8%).

When stressors came up, the majority of people reported experiencing stress at a moderate level (56%). About 18% experienced severe or extreme stress. However, Americans are not consistently stressed: 48.1% felt stressed some of the time, and 36.5% seldom experienced stress.

The Centers for Disease Control and Prevention (CDC) recommends that people seek healthy ways to cope with stress. For 26.3% of participants in our study, streaming was not their go-to method of stress management. However, 45.3% said they were more likely to stream during times of stress.

Is Streaming a Helpful Coping Mechanism? 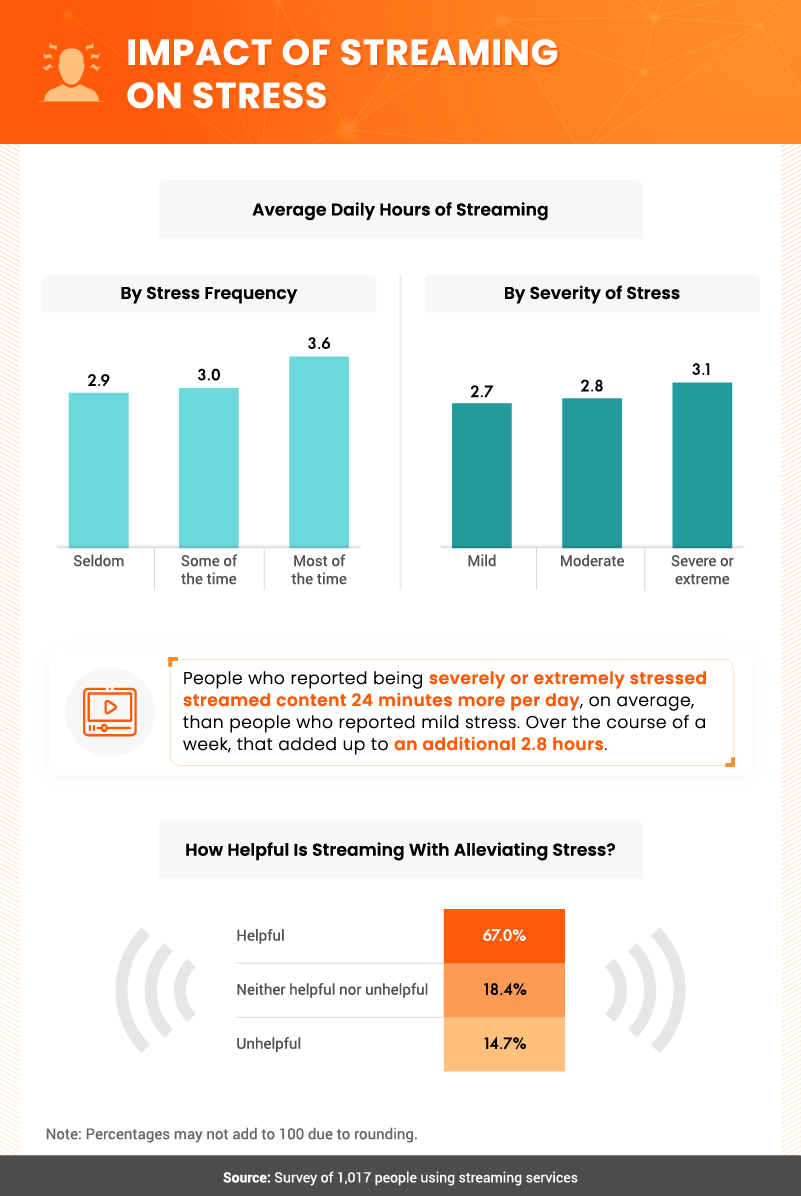 The entertainment industry has changed quite a bit with the evolution of online streaming. Because of companies like Netflix and Hulu and available TV guides that help streamers know what’s on and when sitting down to watch an episode or six is easy and can be done from almost anywhere. But should a person who is experiencing stress in their everyday life use streaming to cope?

According to experts, streaming television has positive psychological effects, but they warn against binge-watching. Typically, binging involves viewing many episodes in one sitting, which is deemed unhealthy because it leads people to be sedentary for too long. While people in our study with severe or extreme stress reported spending 3.1 hours each day, on average, using a streaming service, 67% of those who did stream found it was a helpful way to alleviate stress. Those who streamed the most (3.6 hours) were people who felt stressed most of the time.

Comedy Gets a Boost 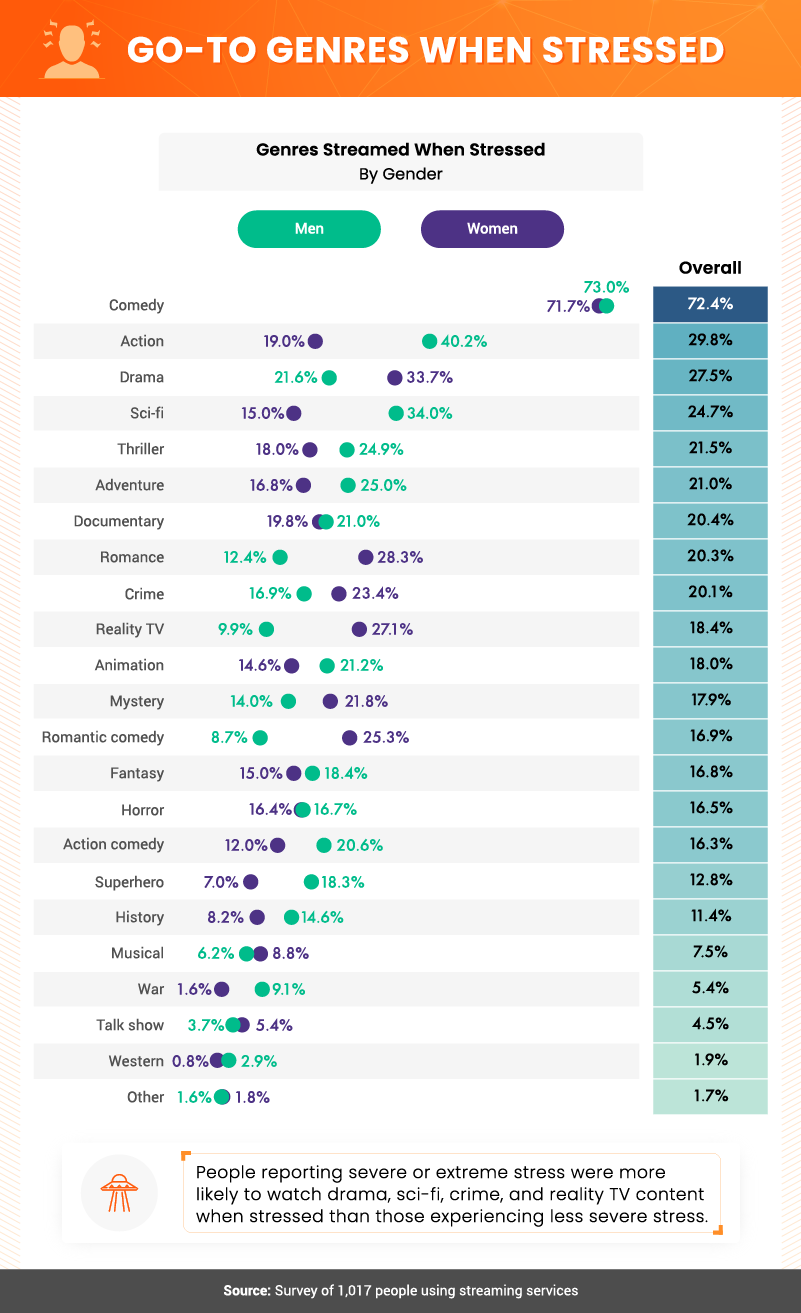 It may sound laughable, but it’s not: A good laugh is a great stress reducer. The Mayo Clinic reports that laughter improves mood and increases personal satisfaction. More than 72% of participants had the right idea: Comedies were the go-to genre for people who streamed during times of stress. This is something Netflix took notice of in 2018 when it made comedies 23% of its in-development content – a top priority along with sci-fi and fantasy. It doesn’t matter if “Dolemite is My Name” or “Frances Ha” is your thing; all that matters is that you laugh a little.

After comedy, action (29.8%) and drama (27.5%) were the popular genres people turned to when stressed, but it was a big jump down. Men (40.2%) turned to action to cope with stress more than women (19%). Meanwhile, women were more likely than men to enjoy reality shows and romances as a coping mechanism, which may explain why “Love is Blind” is all over your timeline. 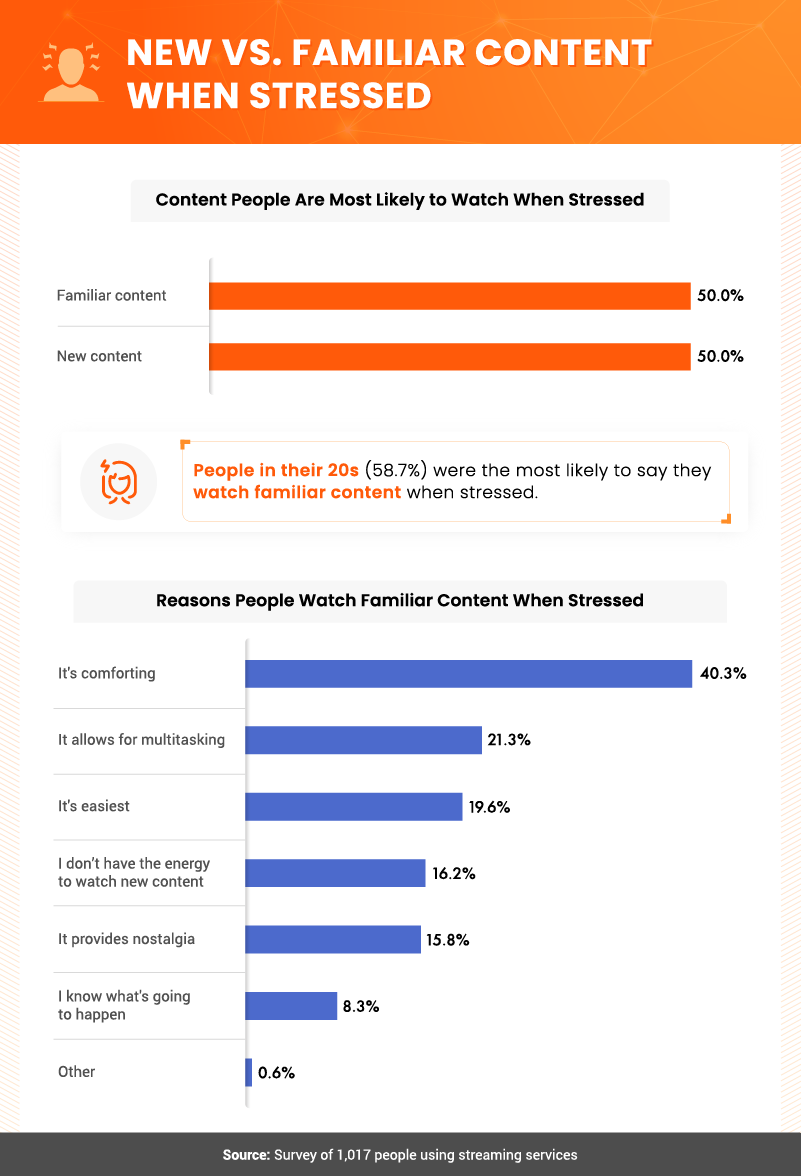 Like watching a comedy, taking a stroll down memory lane improves mood and is a healthy way to cope with stress. Although a significant number of Americans do watch comedies, only 50% of people in our study reported watching familiar content during times of stress. The other half preferred new content. Streaming has made it easier for people to find shows based on what they’ve viewed in the past. Maybe the algorithms do a good job of keeping things similar enough that people are willing to try new content even during times of stress.

For those who returned to familiar content, comfort was the No. 1 reason. During a stressful time, watching season two, episode nine of “Unbreakable Kimmy Schmidt” for the fifth time may be the warm hug a person needs. Twenty-one percent of participants preferred familiar content to new shows or movies because they could multitask while streaming, and 15.8% said it’s nostalgic to stream content they’ve watched before. 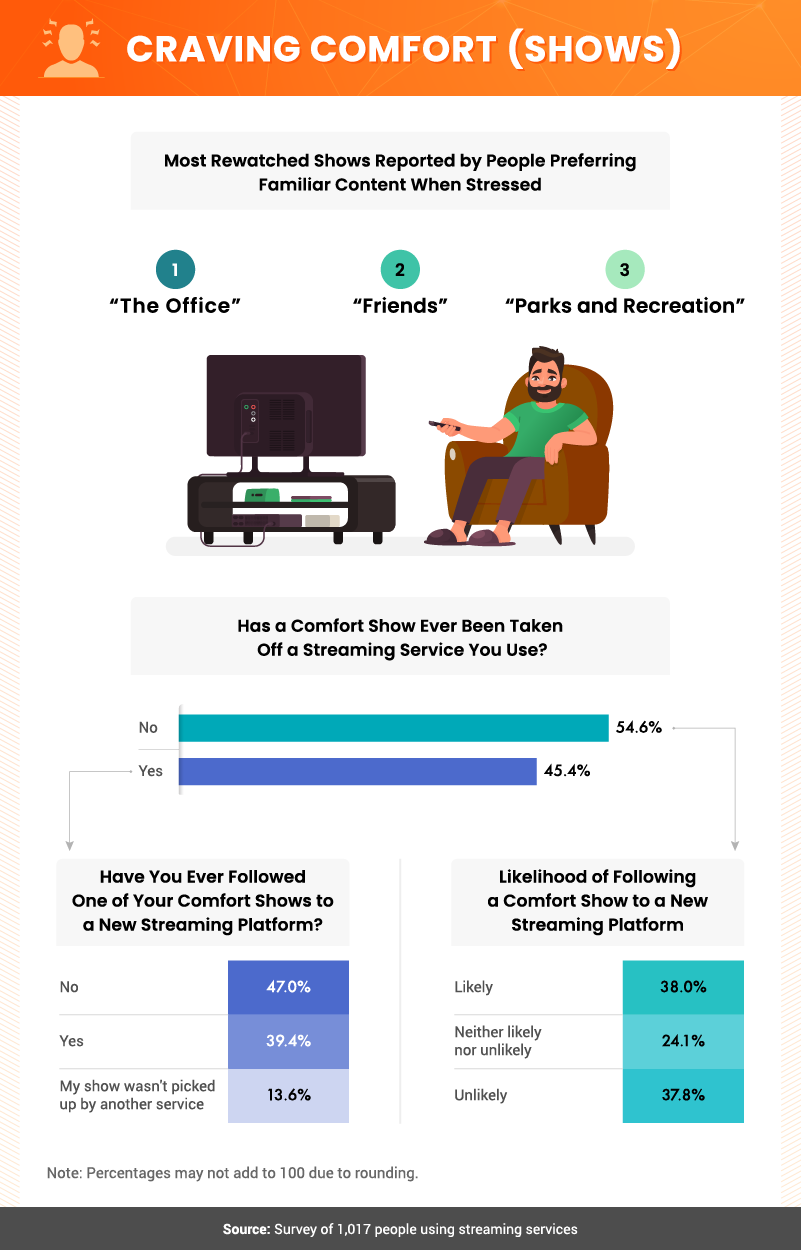 Of the people who craved comfort during times of stress, the top three most rewatched shows were all comedies: “The Office,” “Friends,” and “Parks and Recreation.” Fortunately for Leslie Knope fans, there’s no word of “Parks and Recreation” leaving Netflix anytime soon, but those who prefer “The Office” will have to come up with a plan B. And “Friends” fans have already had to endure months without the show as it left Netflix on Jan. 1 and won’t be available on HBO Max until May.

Try Streaming to Cope With Stress

Stress is a normal part of life, but as research shows, Americans are experiencing chronic stress. Some of it has to do with what is outside of people’s direct control: presidential elections, health care costs, and mass shootings, for example. But our findings show that Americans are also feeling stressed about the everyday: finances, work, and relationships.

While it may not seem possible to change your circumstances, you can choose how you cope with stress. Those who find comfort in their favorite characters can now turn to a streaming service to find a movie or show to bring on the laughs. The key is moderation because too much streaming may help pile on the stress. Do what works for you, especially if it helps you manage life in a healthy way.

With so many choices in the streaming space, and content hopping from one platform to another, it can be difficult to determine which platforms are right for you and your preferences. Flixed is here to help you compare different services based on price and other metrics. Our cord cutter’s quiz is a great place to start. Visit us at Flixed.io today.

We surveyed 1,017 people who reported current use of at least one streaming service.

Respondents were 50.7% men and 49.3% women. One respondent identified as nonbinary. The average age of respondents was 37.5 with a standard deviation of 12.1.

Respondents were asked to report how often and how severely they typically felt stress. When reporting stress severity, they were given the following options:

In our final visualization of the data, we combined severe and extreme for clarity.

Respondents were asked to report how many hours they spend streaming content on a typical day. Averages were calculated to exclude outliers. This was done by finding the initial average of the data and multiplying it by three. That product was then added to the initial average. Any data point above that sum was excluded.

When asked how helpful streaming is for alleviating stress, respondents were given the following scale of options:

In our final visualization of the data, these were combined into three broad groups: unhelpful, neither unhelpful nor helpful, and helpful.

When asked about how stress impacted their likelihood to stream, respondents were given the following options:

In our final visualization of the data, these were combined into the following groups: less likely, neither less nor more likely, and more likely.

Respondents who said they prefer to watch familiar content when stressed were asked to write in the shows they typically watch when stressed. These answers were grouped and tallied to find the three most common shows.

When asking respondents if they would follow one of their “comfort shows” to a new streaming platform, they were given the following options:

In our final visualization of the data, these were combined into the following groups: unlikely, neither unlikely nor likely, and likely.

The data we are presenting rely on self-reporting. There are many issues with self-reported data. These issues include, but are not limited to, selective memory, telescoping, attribution, and exaggeration.

There are many ways to alleviate stress, and streaming can be an accessible option. If you know someone who could benefit from the information in this project (or who wants data to justify their weekend show binges), you’re free to share this content for noncommercial reuse. Please link back here so that people can view the entire project and its methodology. This also gives credit to our contributors for their efforts.