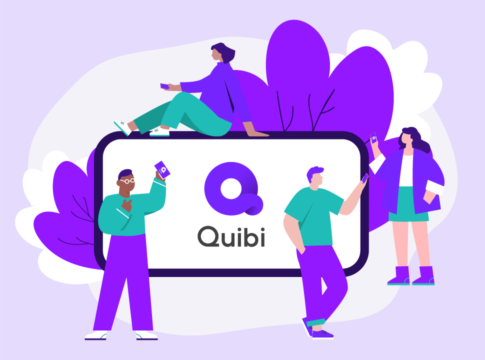 It’s tough to stand out in the crowded streaming industry, but Quibi has dared to try. The app supplies short-form, cinema-quality, original content designed for viewers to watch on their phones while out and about. The vertically-framed show bites (which can be flipped to fill a landscape screen) are broken down into digestible episodes (about ten minutes or less) that inhabit every genre from reality TV and news to thrillers and comedies. Founder Jeffrey Katzenberg describes Quibi as an obvious next step in the evolution of entertainment. “Mobile phones are the most widely distributed, democratized entertainment platform the world has ever seen,” he explained during a keynote presentation. “Innovation in mobile technology and network capability means that we now have billions of users watching billions of hours of content every single day.”

These are big promises, but any hype that Katzenberg managed to create was overshadowed when the first stay-at-home orders swept the nation into a collective frenzy just two weeks before the April 6 launch. In the first month, the number of app installations was somewhere around 2-3 million with the number of active users just scraping past 1 million. In an interview with the New York Times, Katzenberg went as far as to place all of the blame for the app’s underperformance on the coronavirus.

Obviously, it’s not an ideal time to be disrupting certain industries. But is the mass quarantine the only reason for Quibi’s lackluster numbers? Critics have proposed scores of others: there are too many rules, there aren’t opportunities to share, it has a strange name. We conducted two separate surveys—one of 823 people about their familiarity with Quibi, and another of 1,003 people who have downloaded the app to see about their experiences. Here’s what we learned.

About 55 percent of respondents like the idea of Quibi, and Android users are nearly twice as likely to download it 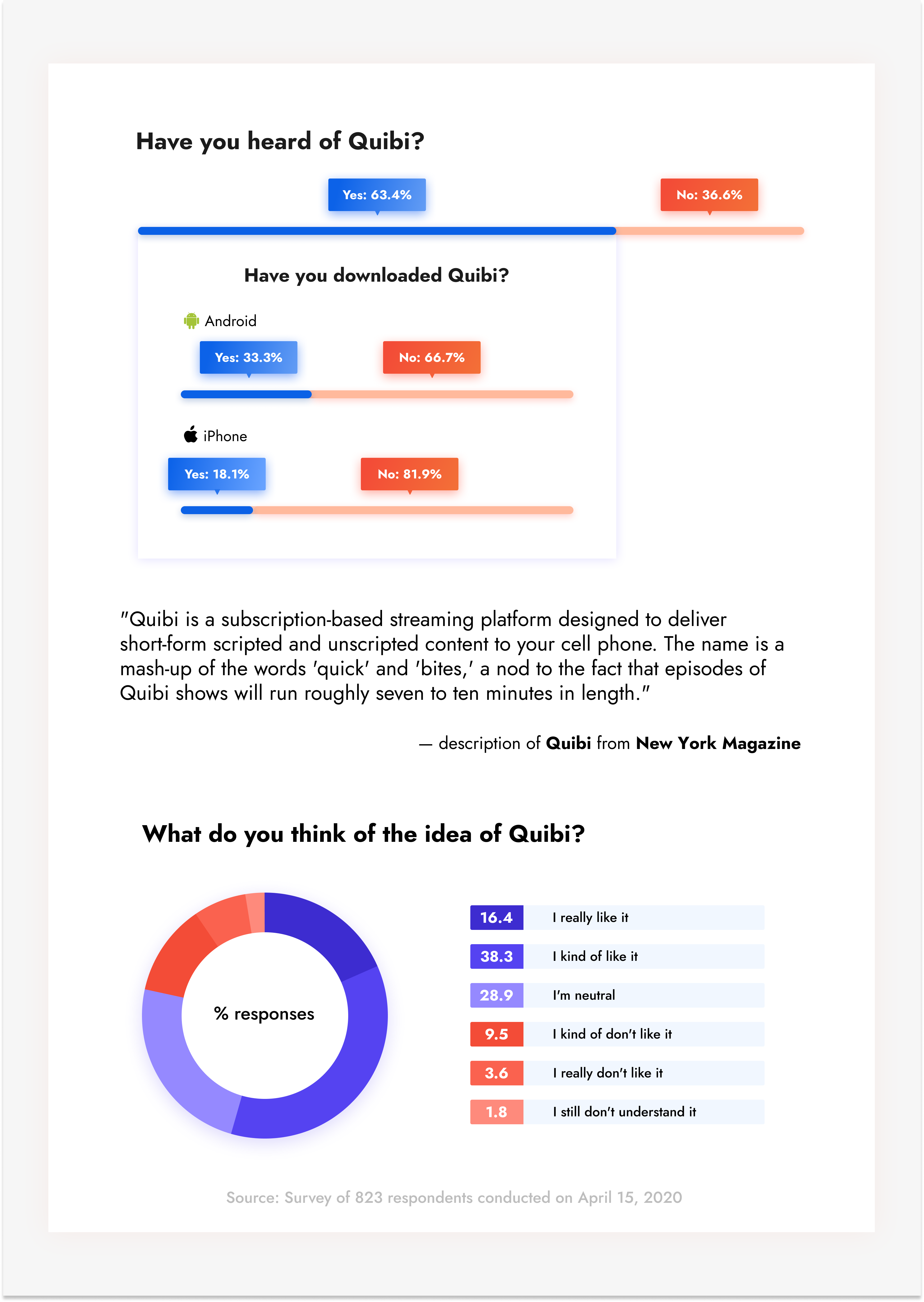 A big hurdle in the unveiling of Quibi was communicating what this totally new platform is, and why consumers would want to pay for it. The past year or so of promotion seems to have helped, since most respondents (63 percent) have heard of it. Reviews for Quibi are surprisingly favorable, with less than a quarter of respondents expressing negative feedback and about 30 percent feeling neutral. Alternatively, about 55 percent of respondents like the idea of the platform with varying degrees of enthusiasm. 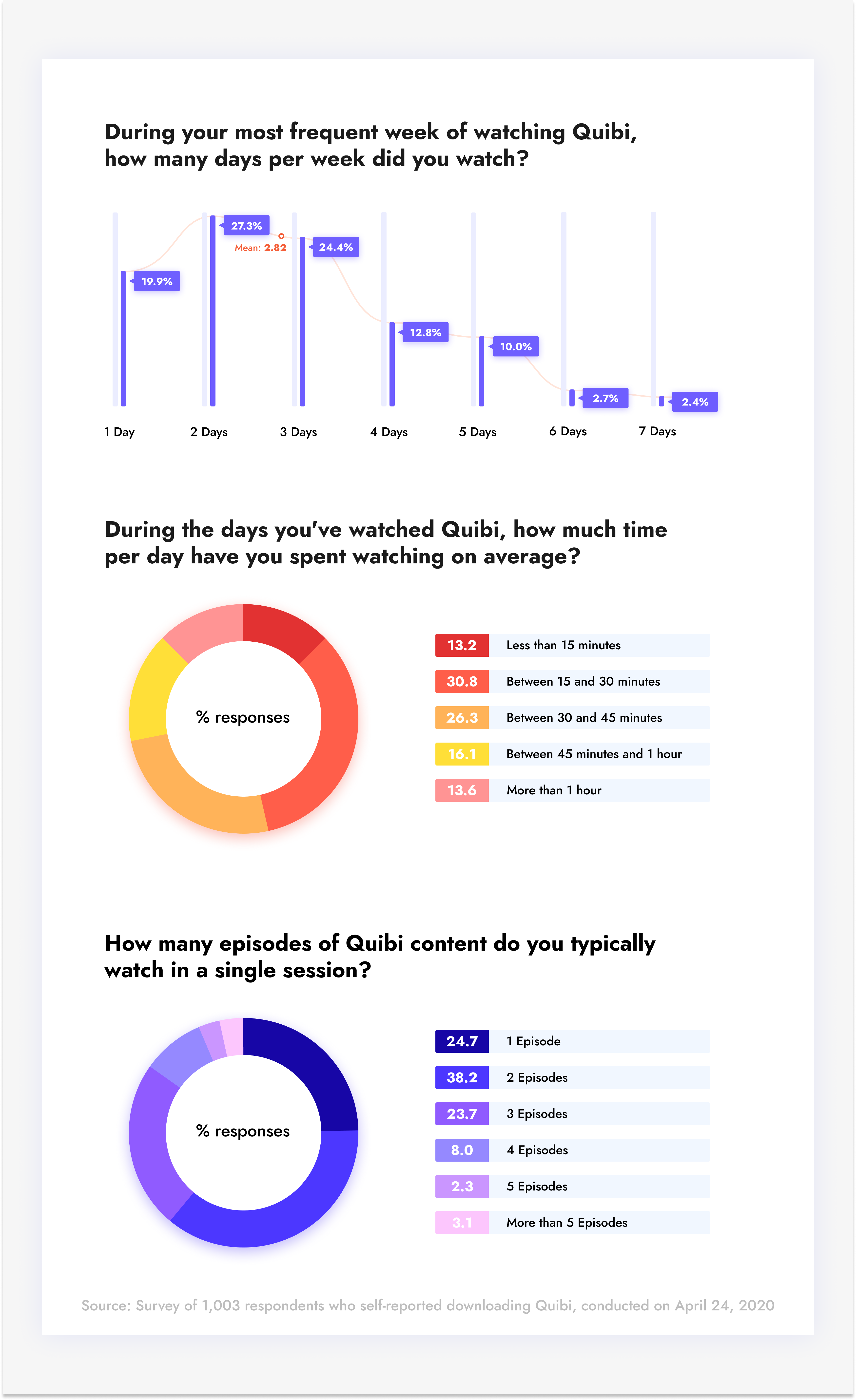 As Katzenberg explained with noticeable exasperation to the New York Times, it isn’t easy to draw direct comparisons to other services because Quibi is a totally unique concept. However, when we evaluated multiple video services, we saw that all of them have seen a substantial uptick in viewing during the quarantine. TikTok experienced an 18 percent increase in downloads during just the first week and, according to our own data, Netflix viewers were streaming an average of two additional hours in the same week. YouTube is also performing well, especially with its live TV streaming services, and is currently pulling in about 15 percent of consumer broadband traffic.

Because people are already glued to their screens, it shouldn’t be as big of a stretch as it appears to be to attract them to something new. Only about 13 percent of respondents are watching more than three Quibi episodes in a single sitting. The average user is spending less than three days a week on the platform, and when people do watch Quibi, most are spending between 15 and 45 minutes with it.

This may have something to do with the fact that new episodes are dropped weekly rather than all at once. The term “binge-watching” entered the public-consciousness in 2012, right around when Netflix completed its conversion from a DVD delivery service to an online streaming platform. The availability of full seasons of TV is what incentivizes long viewing sessions; Quibi’s release schedule harkens back to a pre-streaming era.

Watching YouTube videos was the most common activity people said they’d be doing instead of watching Quibi, followed by spending time on social media 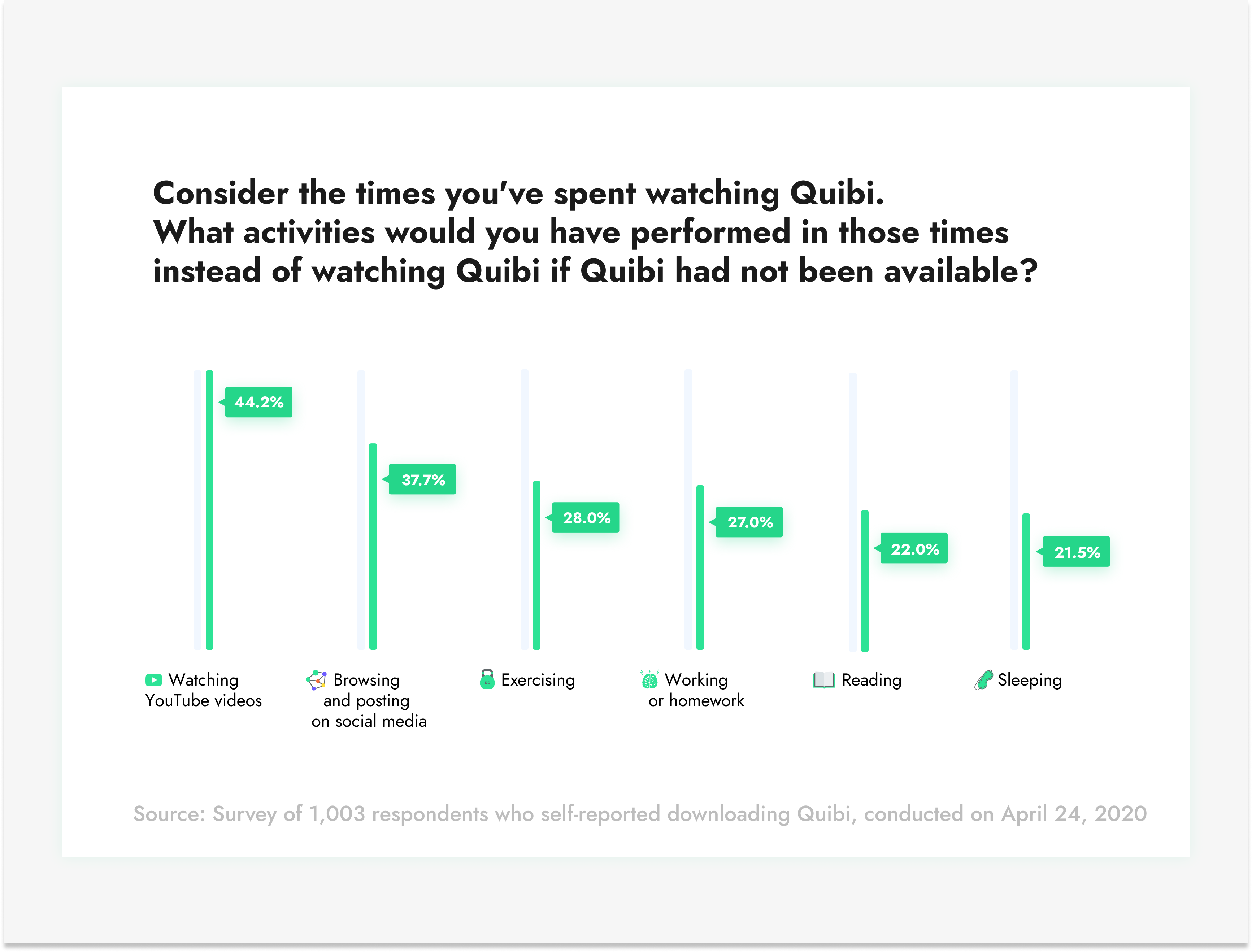 About 44 percent of respondents said that if they weren’t watching Quibi, they would probably be watching YouTube videos. About 38 percent say that they would be on social media. The app is certainly distracting some attention away from other responsibilities such as work, homework, reading, or exercising, but viewers aren’t being pulled into deep Quibi rabbit holes that keep them up at night. 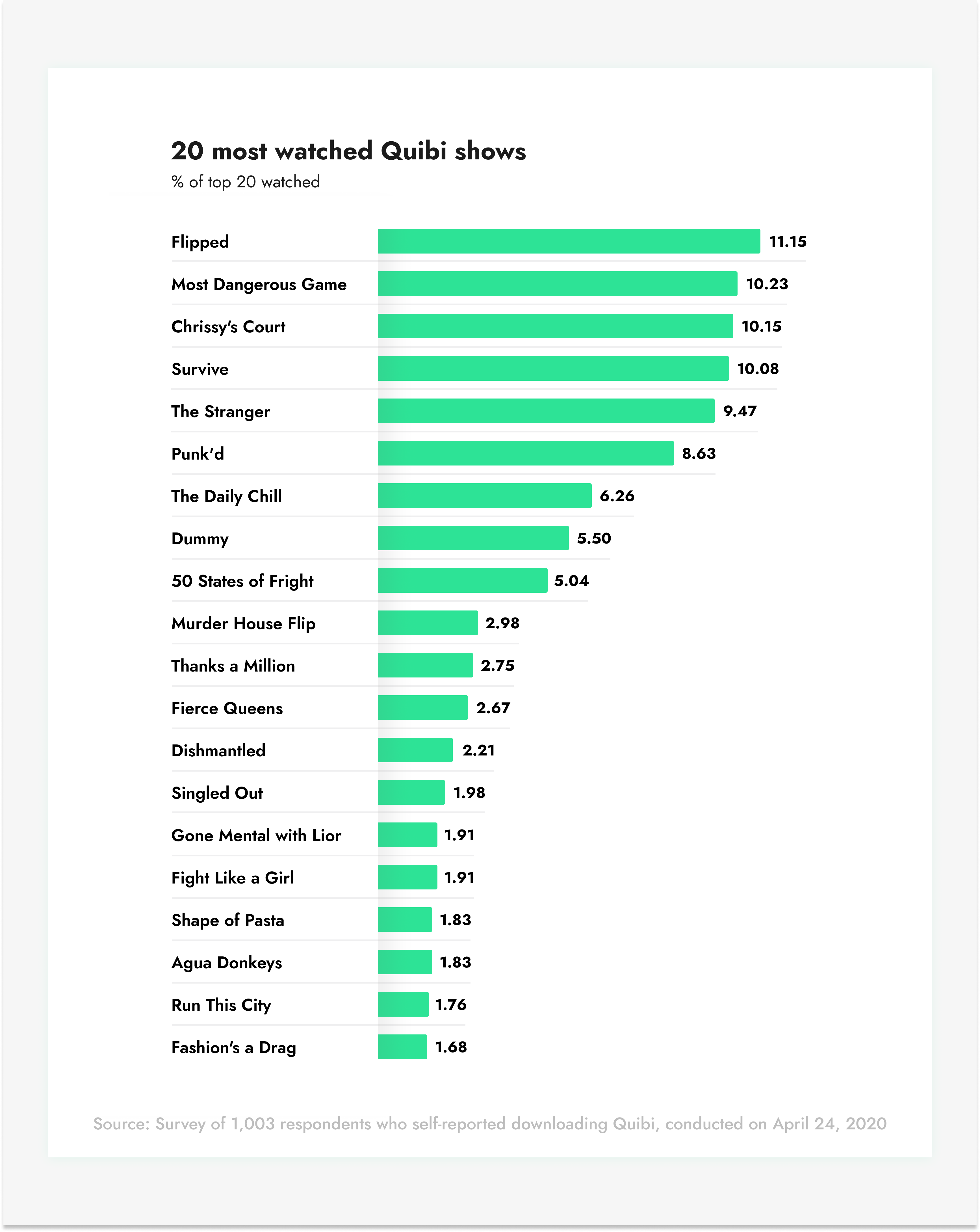 Quibi has made huge investments in star power, but it doesn’t seem to make that much of a difference to viewers. While Chrissy Teigen and Chance the Rapper are likely responsible for attracting viewers to Chrissy’s Court and Punk’d, the celebrity-obsessed Thanks a Million reality TV series is even lower on the list than Murder House Flip—a quixotic clash of Dateline and TLC.

Instead, Flipped—a comedy about a couple forced to renovate a drug dealer’s mansion—came in as the most-watched Quibi show. It was quickly followed by Most Dangerous Game, a dystopian thriller about a man who volunteers to be the game in a billionaire’s hunt in order to make enough money to pay for his brain surgery. They both caricature their respective genres, but they manage to entertain without relying on big names as crutches.

61 percent of users said they would watch more Quibi under non-COVID circumstances, and half of users plan on signing up for a subscription 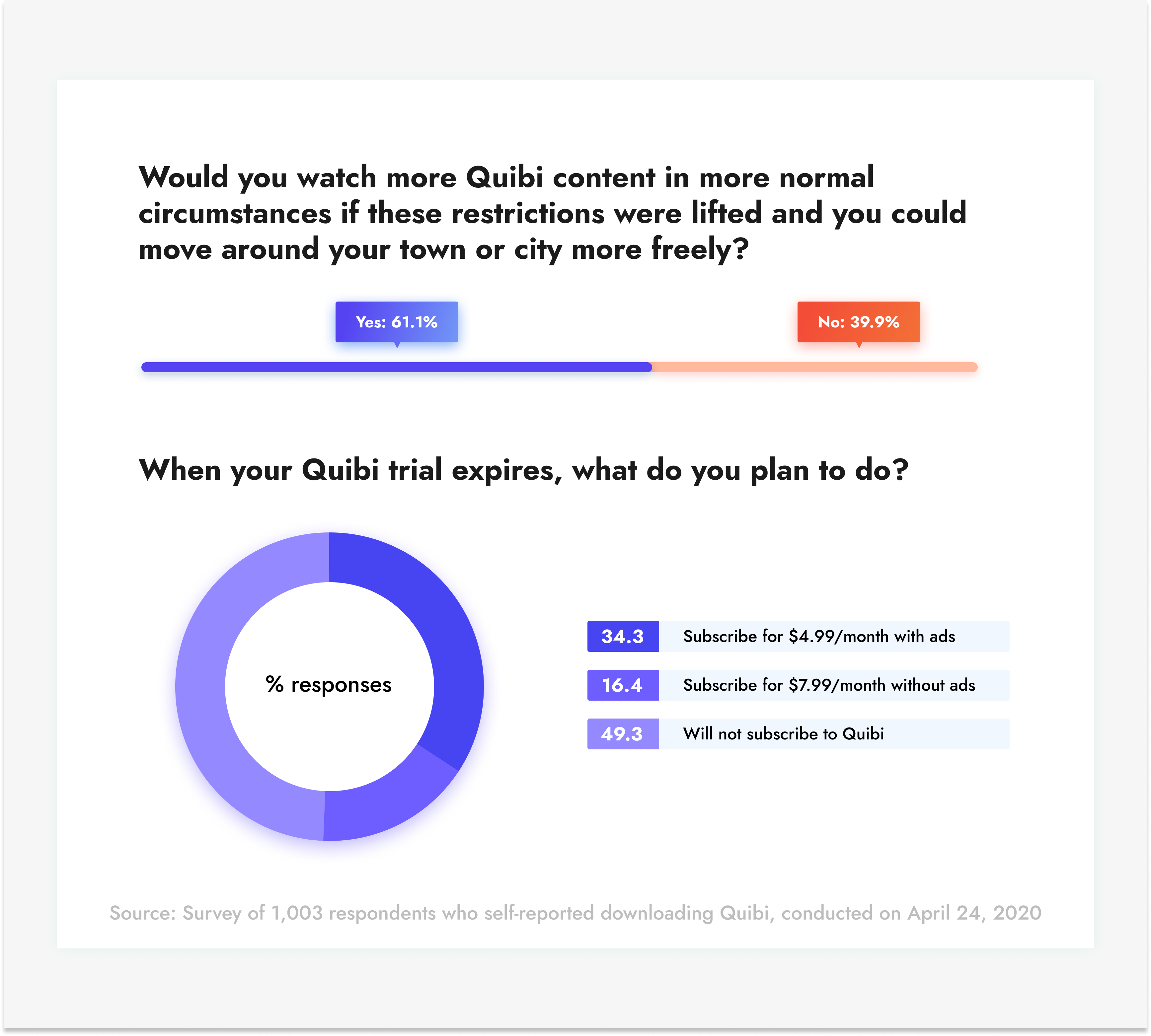 Since almost all of us are stuck at home, it makes sense that people aren’t all that enthusiastic about streaming content designed for watching while on the go. Instead, most people are staying home, watching TV live and on-demand, and with nowhere to go, using TV streaming guides to schedule watching time.

Over half of respondents say they would use the service more under normal circumstances. However, 49.3 percent are not enthusiastic enough about Quibi to spend the $5-8/month on a subscription. Considering that Netflix carries thousands of full-length programs, can be used across all devices, doesn’t feature ads on any plan, and allows multiple users to share an account for $9-16/month. Given the differences in scale between Quibi and traditional streaming platforms, Quibi’s value proposition may be a bit steep for some.

The demographics for survey one were as follows:

The demographics for survey two were as follows: