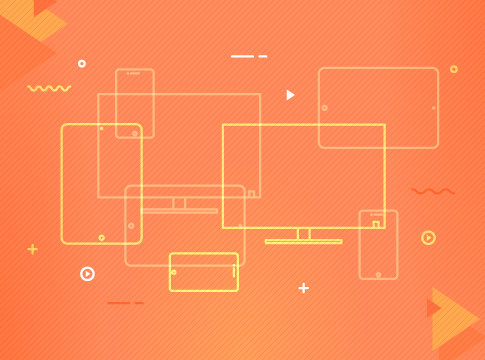 These days, many people are saying goodbye to cable and hello to subscription streaming services. In fact, these “cord cutters” are breaking up with major cable service providers in favor of video streaming options.

The cost savings and the ability to take a hands-on approach to programming lead many to switch to streaming. The option to cut-the-cord with multi-channel live services and TV streaming guides or strict on-demand services gives viewers the opportunity to tailor their options to their viewing habits.

We surveyed over 1,000 streaming subscribers to discover trends when it comes to people’s allegiance to streaming platforms and how valuable these services are to consumers. Read on to see all of our findings. 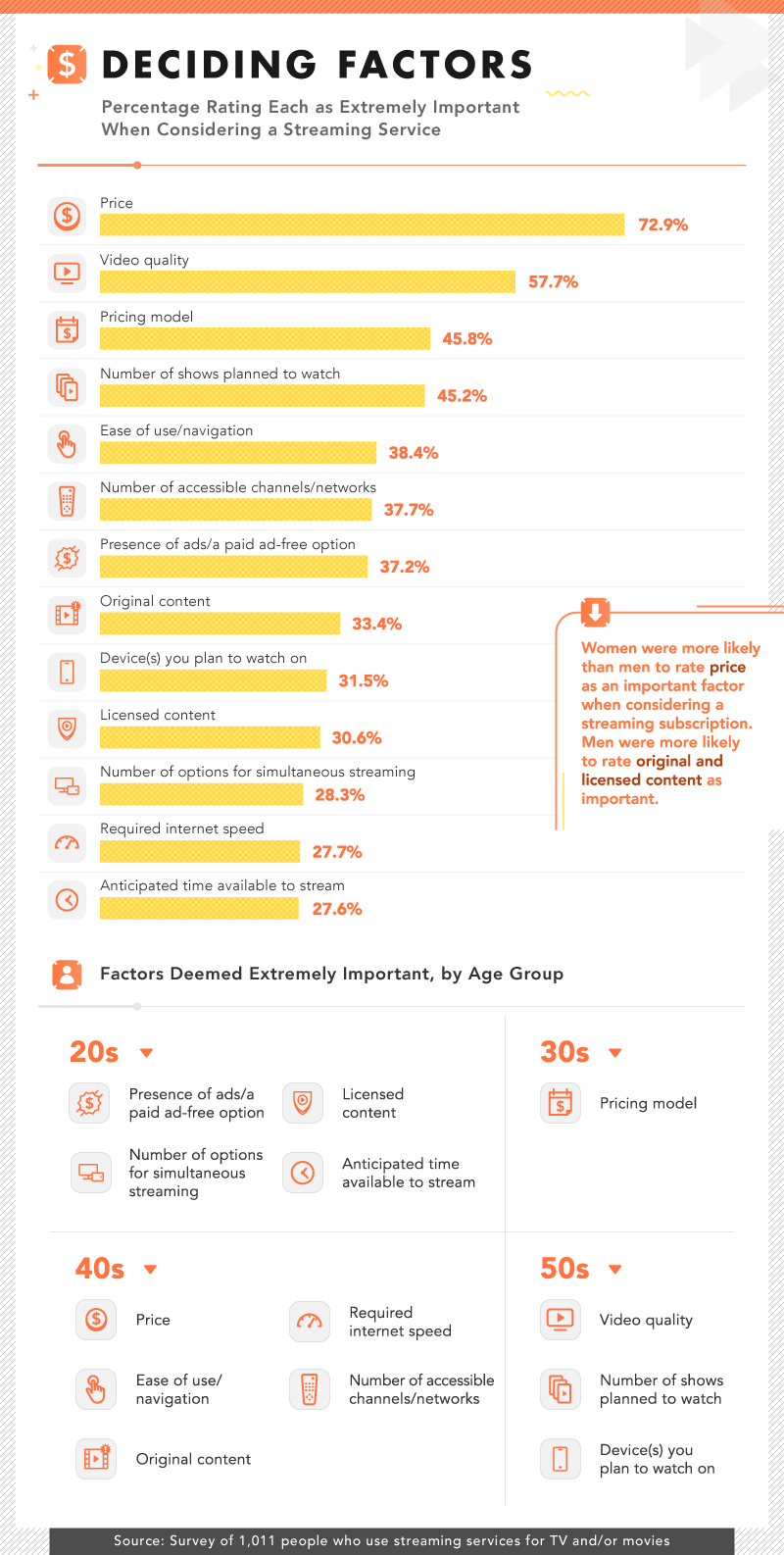 Of the many considerations that consumers kept in mind when signing up for a video streaming service like Netflix or Hulu, price was the top concern, with nearly 73% of respondents saying cost was extremely important. Women were more likely than men to consider this to be an important element. But as many video streaming platforms up the price on their services, they must find a way to retain current subscribers while adding new customers.

Marketing directly to millennials and Gen Zers can be tricky, but speaking directly to their interests can help. We found that people in their 20s were most likely to care whether a service had ads compared to other generations. While this age group might be hoping to avoid advertisements, ad-supported streaming could be the way of the future for platforms like Netflix and Amazon Prime Video. 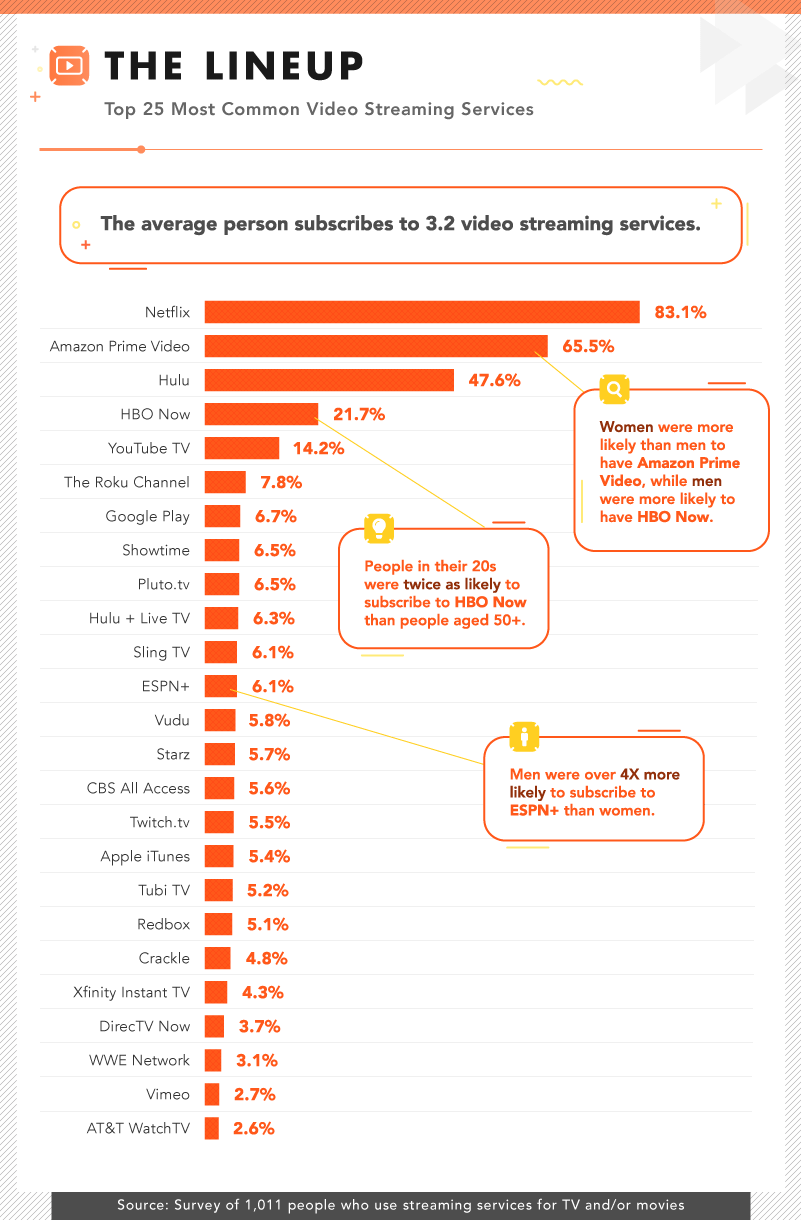 Netflix’s popularity is undeniable, and the majority of respondents agreed: Around 83% of those surveyed were Netflix users.

The other two major streaming players were Amazon Prime Video and Hulu; however, the additional streaming services that survey takers mentioned point to a growing trend: Smaller players in the streaming market are growing and have the potential to fill niche content gaps or live coverage services that don’t exist on a wide scale yet. One of these platforms that is on the rise is ESPN+, which is taking steps to appeal to a wider audience.

We found that people in their 20s were twice as likely to subscribe to HBO Now than people aged 50 and older. And while the king of HBO Now programming was “Game of Thrones,” shows like “Euphoria” are showing even stronger audience gains than the fantasy drama.

Popularity for these streaming services can be enhanced by added benefits that cable providers can’t match, which is the case with Amazon’s Prime Video service, the second most popular overall service that over 65% of respondents use. Video streaming services through Amazon are included with an Amazon Prime membership, well known for its two-day shipping benefit. Its unique position of coupling streaming services with other benefits gives the membership broader appeal and delivers Amazon’s content to a wide range of audiences. 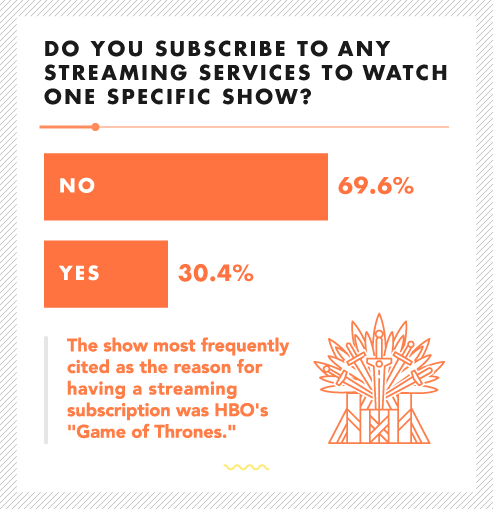 “Game of Thrones” reigned supreme as the show people reported basing an entire streaming subscription around. HBO Now has far more limited programming options than more comprehensive services like Netflix and Hulu. Although their fan base has been devoted to GoT in the past, there is speculation if their loyalty can be kept now that the TV phenomenon has ended.

Netflix’s Loyalty Runs Strong … But How Long Will That Last? 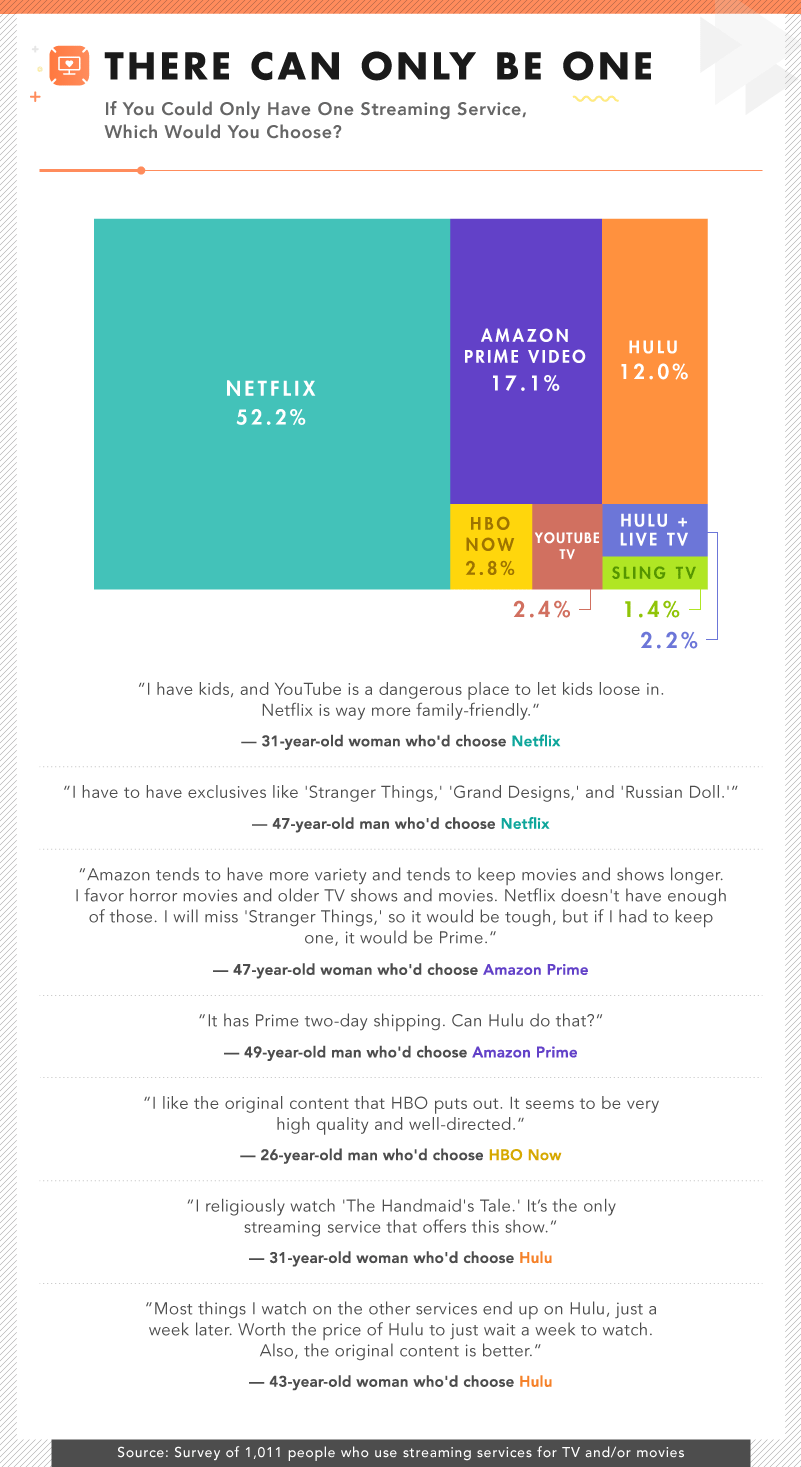 With respondents averaging just over three video streaming subscriptions per person, it seems people tend to gravitate toward having options and a variety of TV shows and movies to choose from.

However, if push came to shove, over half of respondents would ditch all other services in favor of Netflix. The platform has churned out the most loyal customers consistently over time.

Around since 2007, Netflix represents one of the original players in the proliferation of video streaming as an industry. As time went on, competition has grown with the launch of diverse streaming platform options that rival Netflix’s offerings.

Giving survey respondents this ultimatum gives us some insights into why people choose one service over another. Some respondents would be pained to lose certain shows but could justify it if it meant keeping their favorite program. For instance, popular shows, such as “Stranger Things” and “The Handmaid’s Tale,” keep fans dedicated to Netflix and Hulu, respectively.

However, just like athletes move from team to team, programming can switch from service to service. When news broke that the beloved show “The Office” was due to leave Netflix for NBC’s upcoming streaming platform, Peacock, threats by Netflix users to cancel their subscriptions poured in from social media. Many of our survey goers expressed justifying a platform for their favorite show, indicating that they might swap if that program moved to a different streaming service.

Looking to the Future: Disney+, Apple TV+, and More 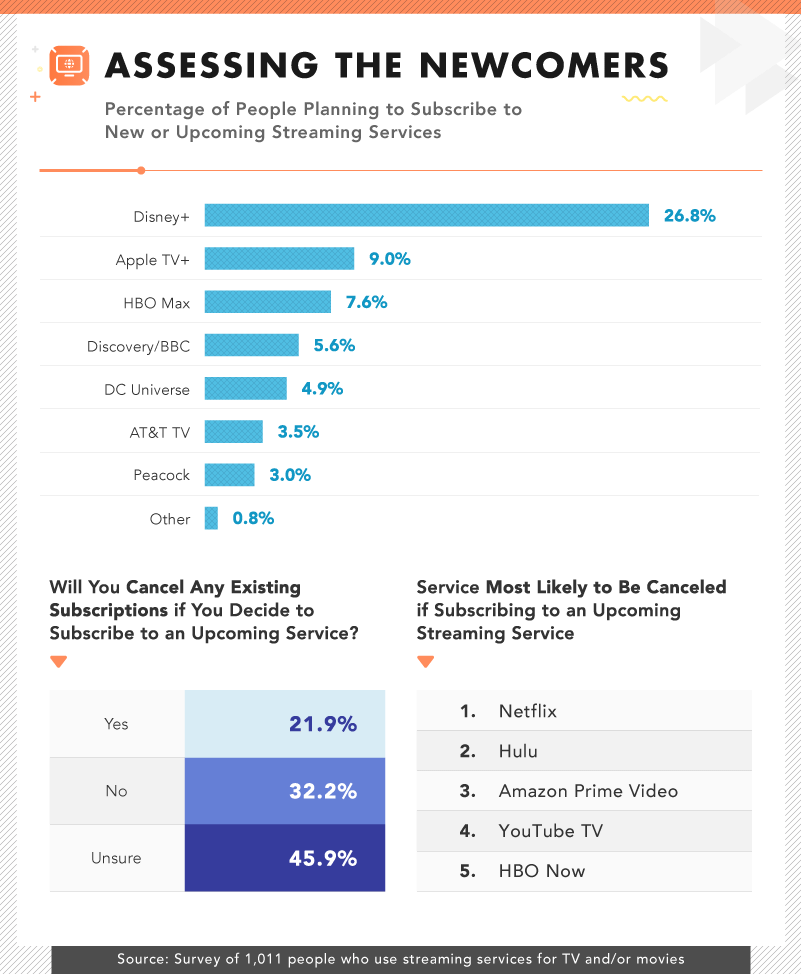 Promising to keep content kid-friendly, Disney+ offers an opportunity for parents and Disney-lovers alike to sign up for a niche service offering: all Disney and Disney-related programming, all the time. In fact, more than 1 in 4 respondents said they had plans to sign up for the service.

This launch means effectively destroying the wall between the “sealed” Disney Vault and consumers. The parent market is a crucial one to tap for these companies with nearly 27% of our respondents expressing commitment to Disney+. Platforms have begun devoting spaces to children’s programming, expressing a vested interest in attracting this massively growing demographic in streaming. As a result, many streaming services are prioritizing child programming.

This could spell trouble for Netflix, or it could bolster their preliminary focus on content for kids. Only 21.9% of respondents considering new services said other subscriptions would for sure get the ax in favor of an upcoming platform. An additional 45.9% said they were unsure if a new service subscription would result in the cancellation of another.

Streaming services’ popularity with parents has skyrocketed, accompanied by thoughtful conversations around sensible streaming usage between parents and children. With dangers that loom in seemingly every corner of the web, it’s important for parents to be diligent about which apps their kids are connected to.

The Stream Wars Are Just Heating Up

Saying goodbye to cable has become much easier in recent years. And as the “streaming wars” hit a peak with a burst of smaller players rising to prominence and new platforms set to debut in the coming year, consumers have many options when it comes to giving their loyalty to streaming services.

With so much variety out there, though, it’s important to do your research to determine which programming options are best for you. If you’re looking for help, head over to Flixed to compare streaming services by important metrics such as price and benefits. Take our “cord cutter’s” quiz to earn a personalized recommendation for the best platform for you needs.

We surveyed 1,011 people who use video streaming services about their usage and preferences. Respondents were 52.1% women and 48.8% men. The average age of respondents was 37.5 with a standard deviation of 11.7.

Respondents reported all streaming services they currently used from an exhaustive list. In our final representation of the data, the 25 most common services were represented.

When asked which service they would keep if they could only have one, respondents chose based on their self-reported current services. They had to report using a service to have it as an option when selecting their pick.

Respondents were asked to rate a number of variables relevant to considering a subscription to a video streaming service. They rated each factor on the following scale:

Our final presentation of the data looks at the percentage of people who rated each factor as extremely important when considering subscribing to a streaming service.

The data presented in this project are based on self-reporting. Potential issues with self-reported data include selective memory, exaggeration, telescoping, and attribution.

Do you discuss the merits of video streaming services with your friends and family? Feel free to share this study for any noncommercial reuse to keep the conversation going. We simply ask that you link back here so that people can see the entire project and its methodology. This also gives credit to our hardworking contributors.