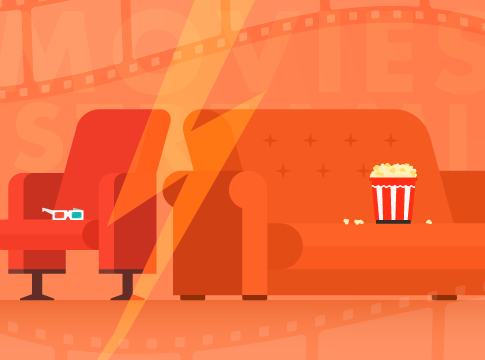 In fact, some think the most popular streaming service, Netflix, might be the one in jeopardy – with the introduction of other streaming services. However, streaming services have become more popular than paid TV services. So how do streaming services measure up to theaters? Do people prefer watching movies from the comfort of their own home more than on the big screen – even when first released? We surveyed over 1,000 people about their movie-viewing preferences to learn which screen reigns supreme and why. Keep reading to see what we found.

Half of Frequent Moviegoers Would Prefer to Stream Movies at Home. 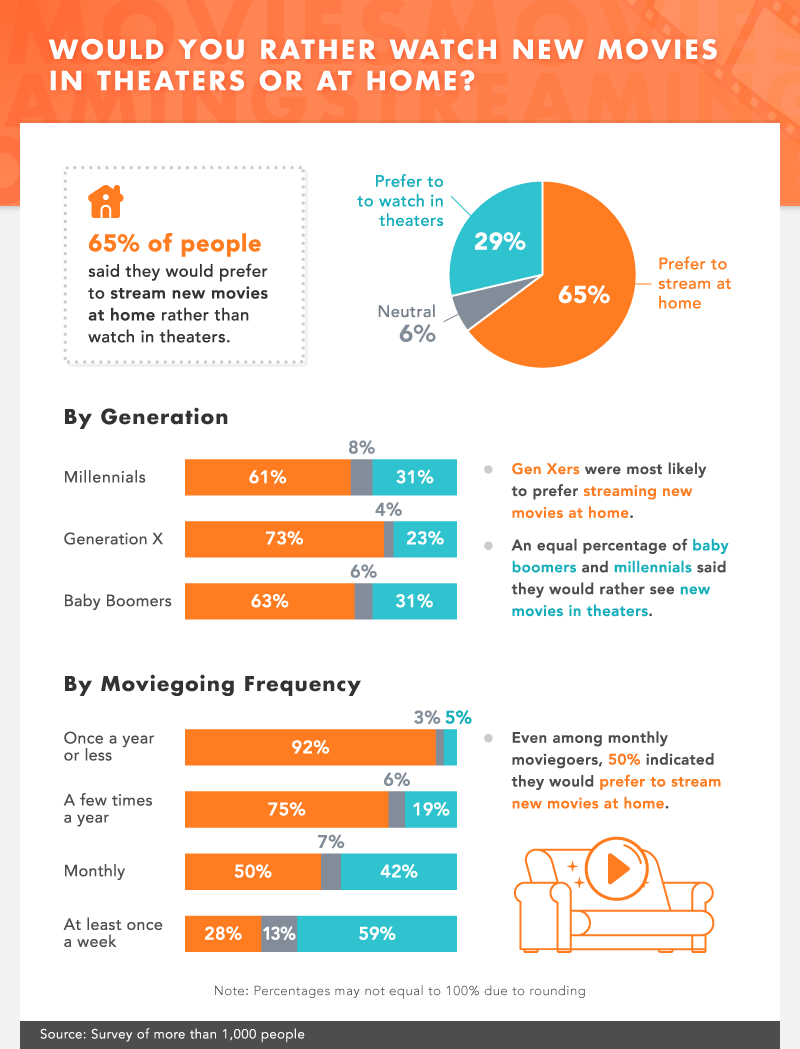 Millennials Were the Most Likely to Pay a Higher Price to Stream. 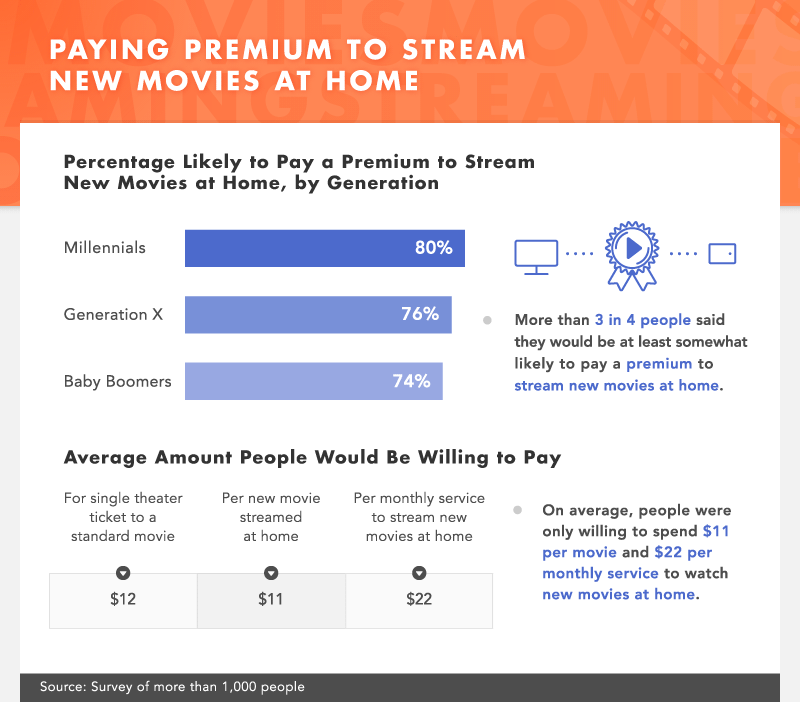 When movie theaters first opened, a few nickels were enough to enjoy a film. Fast forward 70 years and the average price of a single movie ticket in North America has reached a record high of $9.38. But around the world, some tickets can cost moviegoers upward of $50. Considering the increasing cost of going to the theater and a strong preference for at-home streaming, more than 3 in 4 people said they would be at least somewhat  likely to pay a premium to stream new movies at home. While 74% of baby boomers said comfort was worth a premium price, 76% of Gen Xers and 80% of millennials said the same.

Paying to stream isn’t doomed, though. It seems that people would rather pay more for a monthly service than a single stream. Across all generations, people were willing to spend an average of $22 per monthly service to watch new movies at home.

Comfort Is the Top Reason People Prefer to Watch From Home. 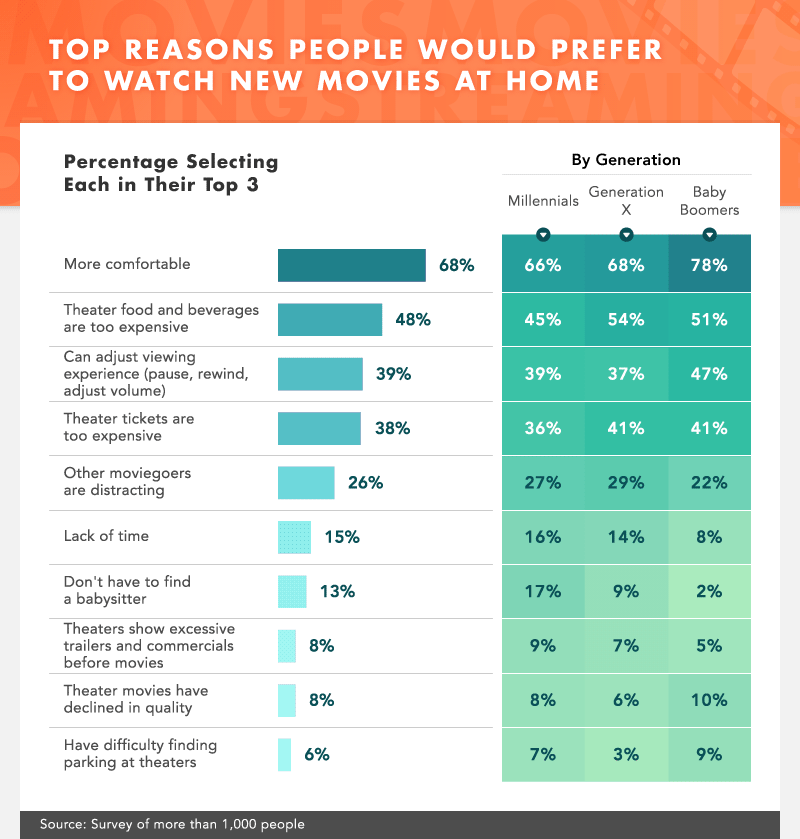 To combat the failing box office, movie theaters have turned to recliners, a full menu, and even fully stocked bars. But plush seating and alcoholic beverages haven’t done much to gain support – comfort and the cost of food and beverages at theaters were the main reasons people preferred to stay home and stream new movies.

Nearly 70% of people said they prefer to watch new movies at home because it is more comfortable. Baby boomers were the most likely to identify comfort as one of their top three reasons (78%), but 68% and 66% of Gen Xers and millennials said the same, respectively. The cost of food and beverages at theaters along with the ability to adjust the viewing experience were also among the top three reasons people preferred to stream. However, millennials were the most likely to cite others reasons: 16% of the younger generation said one of their top reasons was lack of time, while 17% said they would need to find a babysitter if they went out.

“Theater Experiences” Increase Movie Enjoyment for the Majority of People. 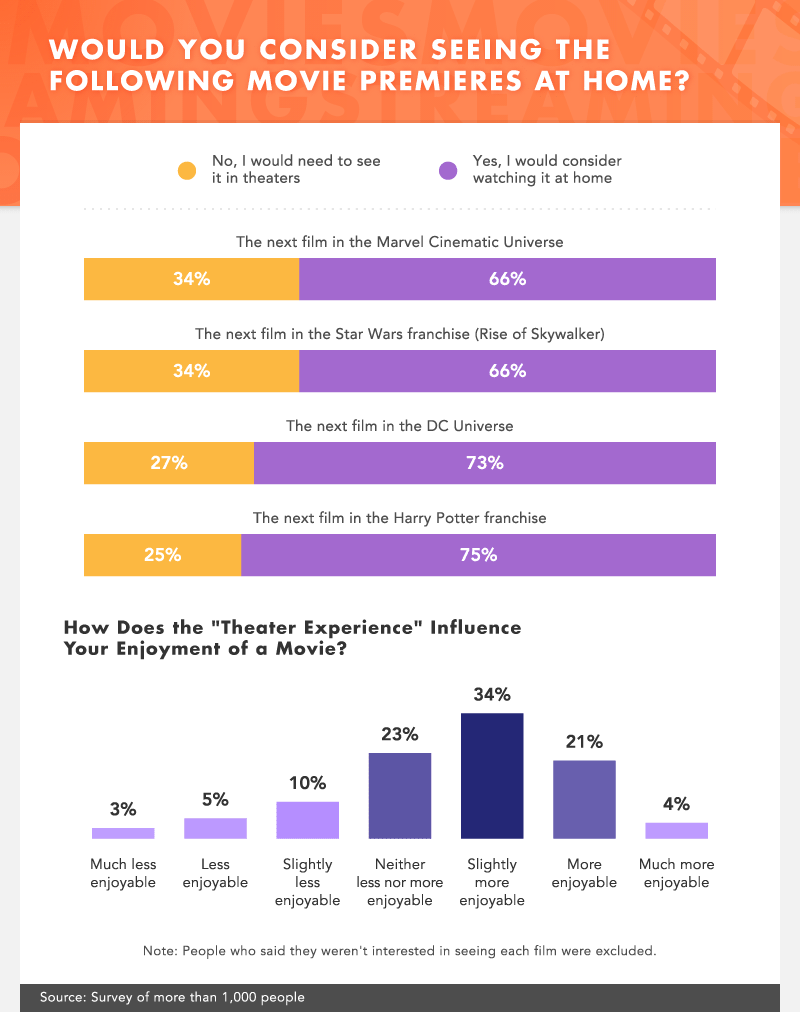 Watching movies at home may come with unmatched comfort, but the sound, sight, and overall experience make some major films better suited for the theater – or at least that’s how it seems. When it came to viewing preferences for popular film premieres, the majority of respondents were just fine watching them from their couch.

Streamers Plan to Go to the Movies Less Over the Next Three Years. 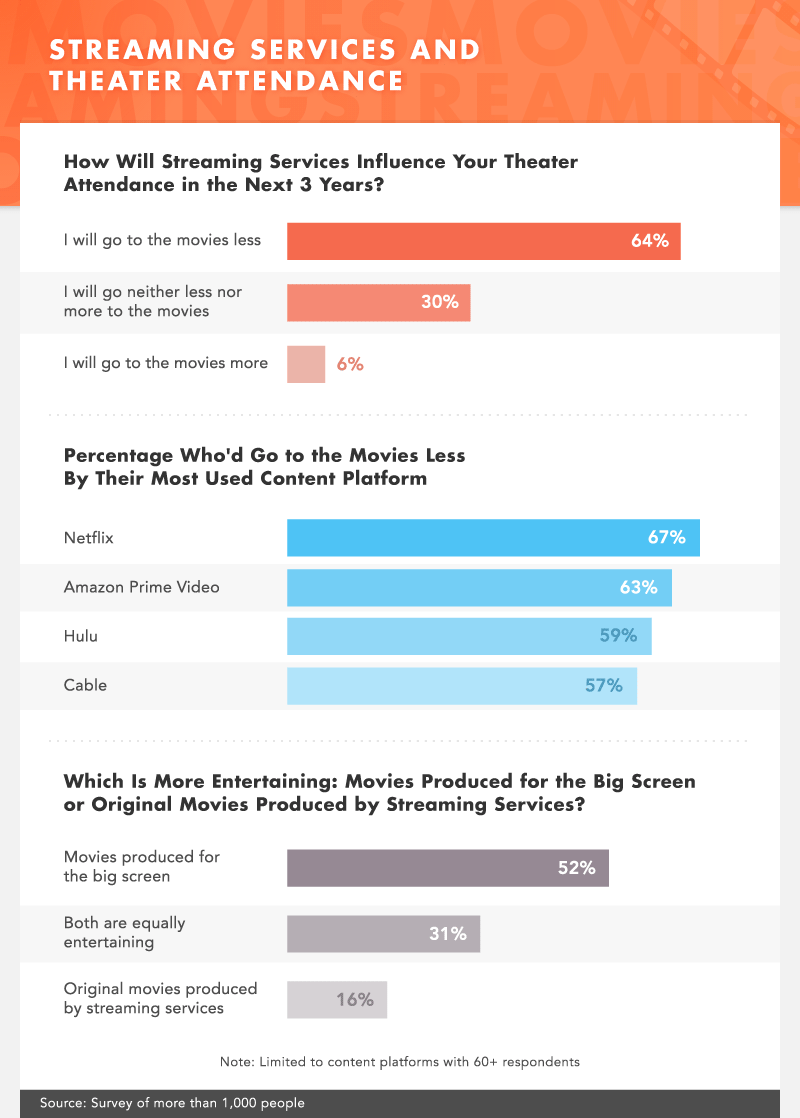 The popularity of Netflix and other streaming services has put pressure on movie theaters. While streaming services aren’t solely responsible for the drop in ticket sales, people clearly favor the cheaper, more convenient option – so what does this mean for the future of theaters? Sixty-four percent of people said they would go to the movies less in the next three years, while only 5% said they would go to the movies more over the next three years.

Despite popular movie theaters using Netflix as a model for new subscription services, Netflix users were the most likely to say they would go to the movies less (67%). Sixty-three percent of Amazon Prime Video users and 59% of Hulu users said the same, while cable TV users were the least likely to admit to a decline in attendance.

There’s no denying that Americans favor comfort – and the same goes for movie watching. Whether using live TV streaming services like Hulu + Live TV with a TV guide or an on-demand service like Netflix, viewers have more choices. Streaming services have opened doors for people to watch new movies at home and have even convinced frequent theatergoers to stay in. But the future of movie theaters isn’t completely doomed. New ticket subscription services may make the theater experience more attractive to viewers, especially since cost is a major factor in their decision to watch from home.

However, if subscription services start releasing movies at the same time as movie theaters, home entertainment could take on a whole new role. But until that happens, the cost and comfort of watching movies at home are well worth the wait.

Dealing with cable, on the other hand, isn’t. With so many streaming services, it’s difficult to know which one will provide the same content as your beloved cable package. At Flixed, we’re here to help you cut the cord and find the right streaming service for your needs. Making the switch doesn’t mean missing out on your favorite channels or even a heftier price tag – to learn how, visit us online today.

Content streaming platforms were limited to results with 60 or more respondents.

Netflix and chill has become the standard way to watch movies, but many people might not realize what their streaming habits mean for theaters or the film industry. If you’d like to share our findings with your followers or friends, the graphics and content found here are available for noncommercial reuse. We just ask that you link back to this page to give the authors proper credit.