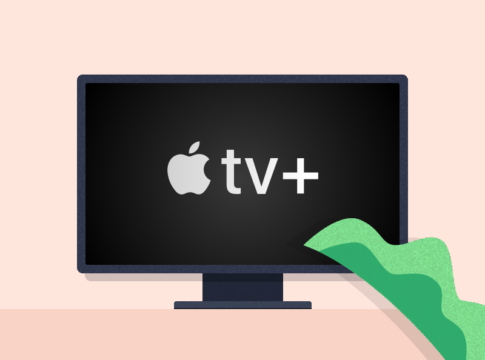 Apple reportedly spent $6 billion to create the opening roster of shows on its Apple TV+ streaming service, which debuted in November. But TV+ enters an increasingly crowded field—its release was quickly followed (and arguably overshadowed) by Disney Plus. Under its new AT&T ownership, HBO itself will morph into a version of Netflix with HBO MAX, offering a ramped-up selection of original content and syndicated programming from other networks. Comcast will release its Peacock service sometime this year. Niche services no one has ever heard of will continue to proliferate.

In order to separate itself, Apple TV+ has pushed its star power and production value to overdrive, enlisting everyone from M. Night Shyamalan to Jennifer Anniston, and has leveraged the service’s role in an existing product ecosystem. In early January, it announced it was signing a five-year deal with the new production studio of HBO’s defected CEO, Richard Plepler, to help steer its programming into the future.

Will it be enough? We surveyed TV+ viewers in late November, a little less than a month after TV+ was available, to get an early sense of how people have received the tech giant’s foray into the entertainment business.

28 percent of people whose trials expired signed up Apple offers TV+ in a bevy of trial options unusual among streaming services. There’s the typical short-term trial period (in Apple TV+’s case, seven days), but the company has also leveraged its indomitable place in the gadget market to offer something perhaps no other streaming service can: a one-year free trial to those who purchase a new Apple device. Students who sign up for its $4.99 Apple Music get TV+ for free.

So far, most people have found their way to Apple TV+ the same way they do to every other streaming service: by clicking a button for a free trial. 73 percent of Apple TV+ users we surveyed tried the service through this avenue. Of them, 28 percent ultimately signed up.

But when people whose trials haven’t expired were asked if they would sign up, 59 percent said yes. Why the disparity?

Perhaps it’s a matter of behavioral economics: people harbor vague intentions to make a purchase until it’s actually time to pay the bill. Those whose trials haven’t expired also include users who signed up with the purchase of a new device, and maybe those people are more likely to be Apple devotees, more inclined to buy anything the company puts out. Or maybe it takes more than a week to become fully immersed in Apple’s offerings, giving shows sufficient time to pick up steam. 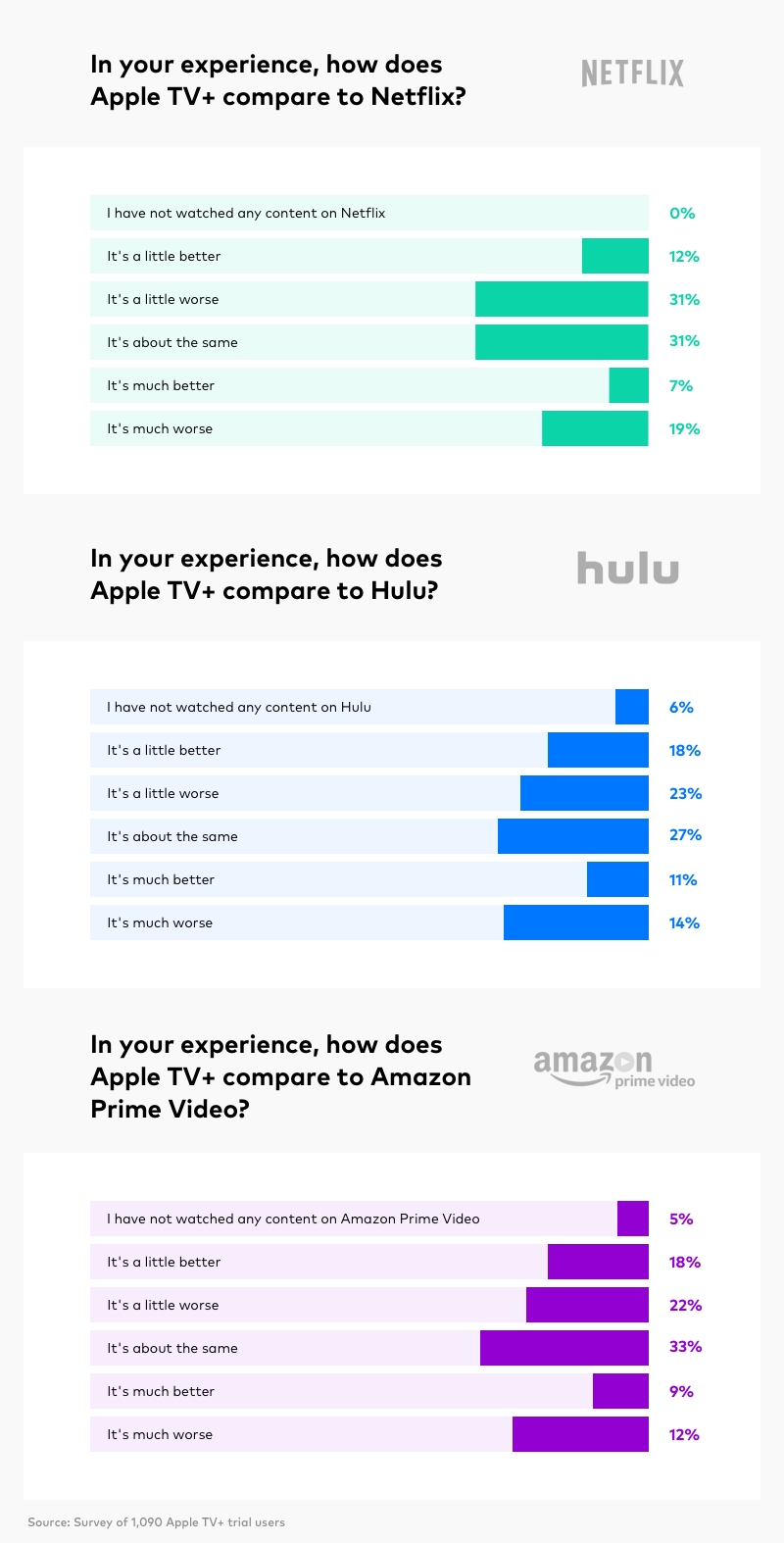 Apple TV+ faces enormous competition from incumbent streaming services, live TV streaming services like YouTube TV that rely on TV guides and stricter scheduling, and heavily funded upstarts, notably the aggressively priced and bountifully stocked Disney Plus. And consumers only have so much appetite: One study found that 60 percent of American adults wouldn’t pay more than $20 per month on streaming.

Next to three of the most established names in streaming, Apple’s offering doesn’t appear to look terribly attractive.

On average, respondents said they liked Apple TV+ less than Netflix, Hulu and Amazon Prime Video. But they were most displeased with TV+ compared to Netflix. This could present the service with problems down the road: Unlike its competitors, who are still working to find the right mixture between original and syndicated content, Apple TV+ is currently 100 percent original. Its unfamiliar offerings will have to be sufficiently compelling to overcome the hurdles created when a content portfolio doesn’t have standards like Friends to fall back on.

On average, people who signed up for a subscription would pay a maximum of $7. Those who didn’t sign up would only pay $1 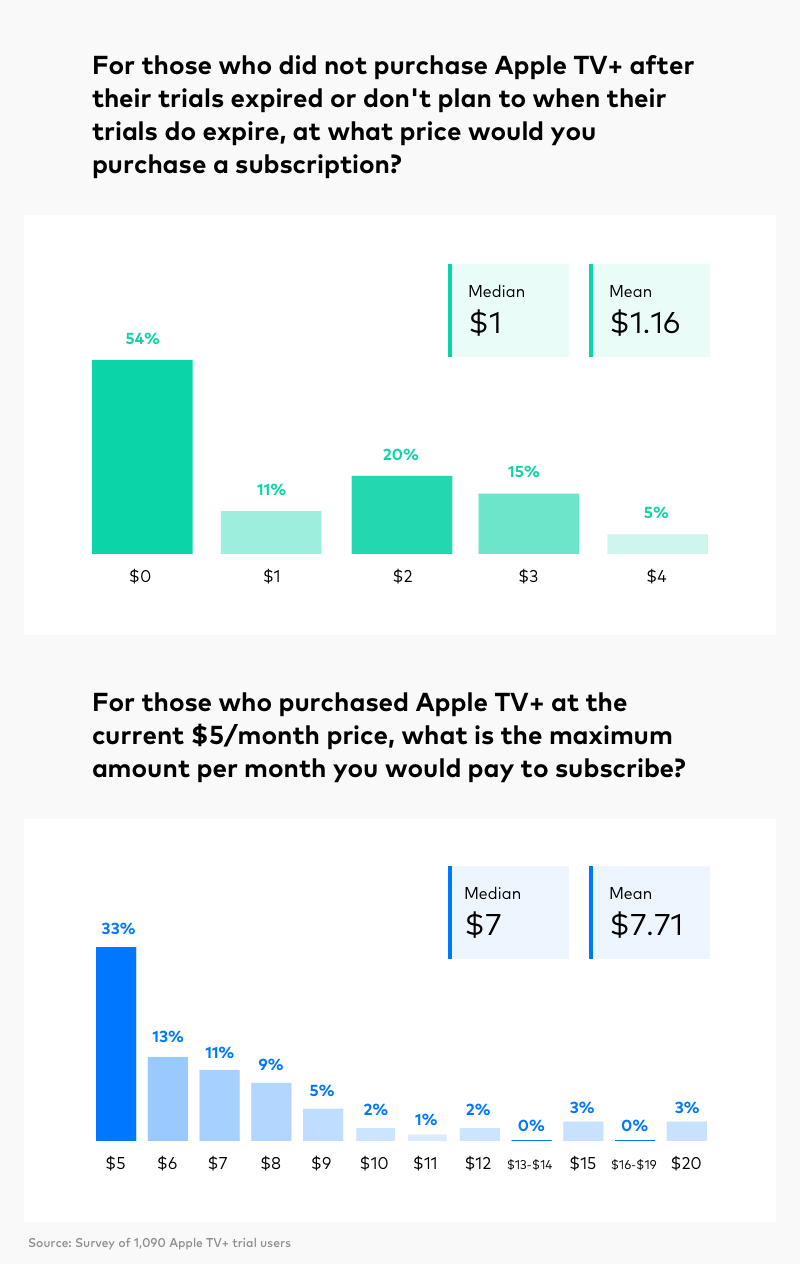 Even if Apple TV+ doesn’t have the widest offering, it does have something else: The lowest price. At $4.99 per month, Apple is pricing TV+ to move. That’s less than half of the $12.99 for Netflix’s standard plan, and less than even the $6.99 for the already low-priced Disney Plus.

The company doesn’t appear to be leaving much on the table. Those who opted out of subscribing didn’t appear to be easily lured: The median price that people would pay for a subscription was just $1, indicating that they’d practically have to be given the service for free in order to sign up.

Similarly, those who did subscribe indicated that Apple’s $4.99 offering was around what they’d want to pay already: 33 percent said they wouldn’t pay more than TV+’s current ticket price, and 20 percent said they’d pay $10. The median price respondents said they’d fork over was $7.

Apple TV+ viewers watched an average of 3.31 hours per week, and they watched the most on Apple devices

As the average number of hours Americans spend watching video has climbed to six per day, that has left plenty of time for new services to cut off their own slices of attention. Apple commands an average of 3.31 hours per week, according to the survey. A 2018 report found that people spent 10 hours per week watching Netflix, and five hours watching Hulu and Amazon.

Those watching on a Roku spent the fewest hours watching and also gave TV+ the lowest scores. But those watching TV+ within Apple’s ecosystem spend the most time with the service: users watching on Apple devices spent more than three-and-a-half hours a week on average watching TV+. And Apple TV box and iPad users also gave TV+ its highest scores overall, raising the possibility that those most closely married to Apple’s world are also most enthralled with whatever it has to offer.

People enjoyed Helpsters and Servants the most out of Apple TV+’s roster. They liked Oprah’s Book Club and Snoopy in Space the least

Apple spared no expense in both the marketing and production of its flagship series The Morning Show, a drama following the fallout of a morning news broadcast after a host’s #MeToo ouster. It reportedly spent $15 million per episode to produce, and its dominated advertising during the service’s early rollout.

But it wasn’t the most loved, or the most hated: People said they most enjoyed Helpsters and M. Night Shyamalan’s Servant, and they found the least pleasure in Oprah’s Book Club and Snoopy in Space.

The Morning Show was also not the show people were likely to stick with. Of the people who watched at least some of a show or movie, these were how many of them actually watched all available episodes (or, in the case of The Elephant Queen, the entire film).