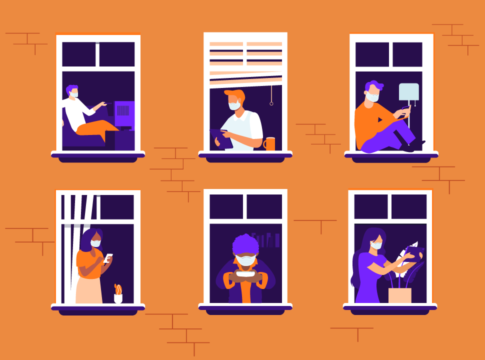 The coronavirus pandemic has interfered with pretty much every single aspect of our lives, and that includes the way we consume media. The more we at Flixed discussed these changes, the more curious we became about how the quarantine has affected what we watch and sources, such as TV streaming guides, to figure out what’s available to watch. Our friends at Reelgood—a platform that consolidates the disjointed universe of streaming services into one app—let us peek at what their own two million active users in the United States watched from before lockdown through the country’s first phases of reopening. Here’s what we learned.

The family genre saw the most substantial uptick in viewers while heavier genres such as crime, biography, and history lost viewers across the board

When comparing streaming that occurred before the quarantine and after the partial reopening, the family genre gained a 23% increase in viewers. Having children home 24 hours a day undoubtedly encouraged parents to sign up for Disney+: According to Forbes, subscriptions to the streaming service tripled on the first weekend of the quarantine.

While the newfound popularity of the service at least partially accounts for the uptick in the animation genre (which had about 19% more viewers during the quarantine than it did before it), the trend in favor of genres that abandon the confines of reality suggests that the general audience is streaming in order to escape reality. The fantasy, science-fiction, and musical genres all saw substantial increases in viewers. The films and movies that define these categories often rely on simplistic moral problems that are neatly resolved with an ending that is satisfying to viewers.

Comparably heavy watchers such as those in the crime category lost viewers. Genres that deal with reality took even bigger hits: The biography genre lost almost 14% of its viewers and history lost 13%. Considering that this year will likely go down in history, it is unsurprising that movies and shows that chronicle issues of the past (such as Chernobyl, I, Tonya, and Vice) have lost more attention than they’ve attracted.

Even as crime shows fell across the board, they dominated the most-watched list 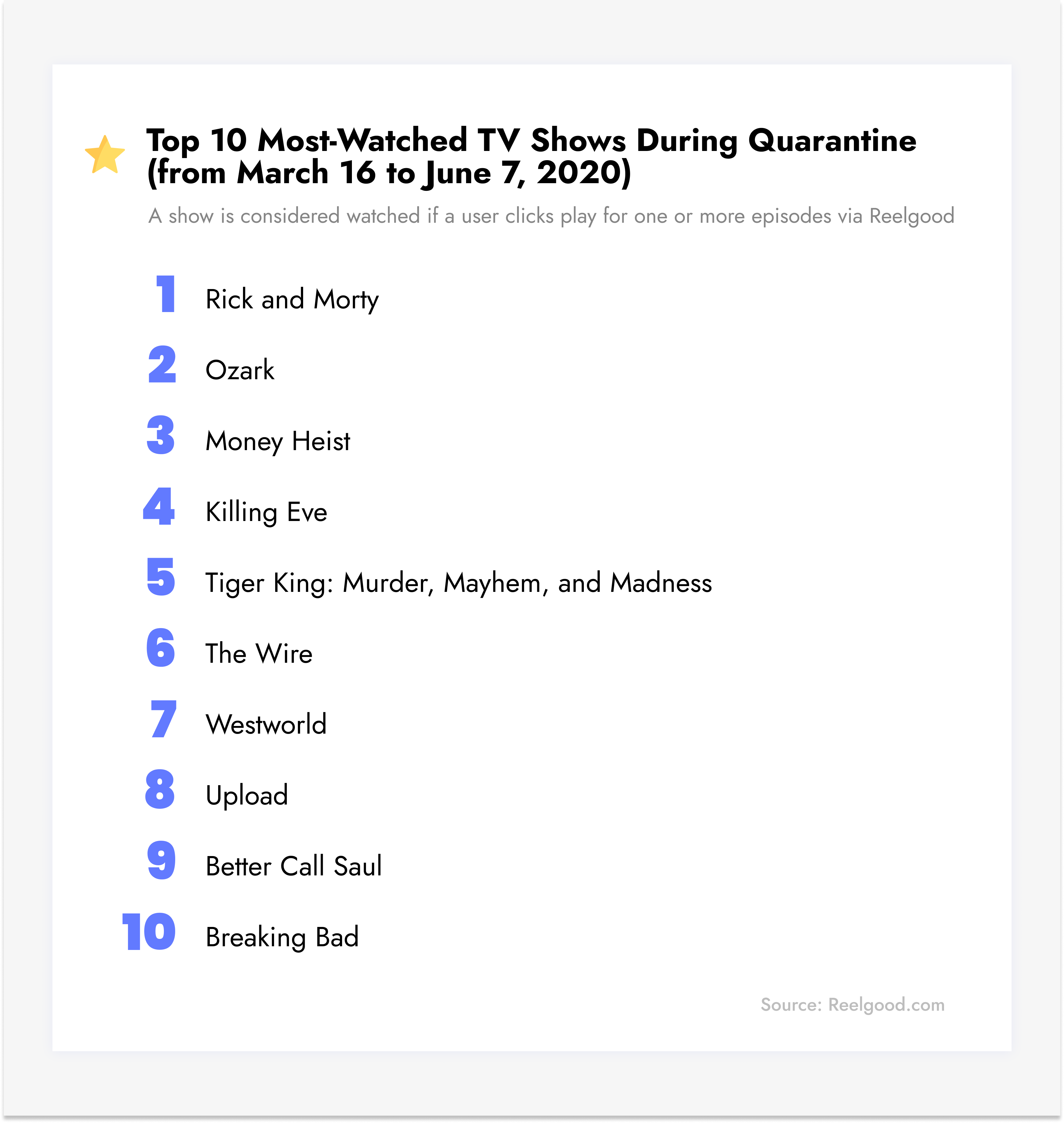 Rick and Morty, an animated series that follows a curmudgeonly scientist and his grandson on their adventures through space and time, was the most-watched TV show in the same period The show was already popular among viewers, so it’s unclear if it contributed to the massive influx of viewers to the animation genre or if the escapism that animation provides brought more viewers to the show.

Here’s where things get weird: Eight of the ten most-watched shows during quarantine were crime shows, despite the fact that the genre as a whole was hit the hardest when comparing streaming before and during the quarantine. One of the shows isn’t even current: The Wire, which spent five seasons building a sociopolitical map of Baltimore, last aired 12 years ago.

It is possible that the anti-establishment vibe buzzing throughout the country is superseding the desire for comfort. Every show on this list either has an anti-hero or an anti-establishment undercurrent. Ozark is overwhelmed with characters who are either unpleasant or totally amoral. Tiger King: Murder, Mayhem, and Madness profiles a cartoonishly evil polygamist who was indicted for killing endangered species and conspiring to murder a vocal critic. Money Heist is a non-English TV show that Netflix brought back for a second season is an allegory for the anti-capitalist rebellion that followed the 2008 financial crisis. Even Upload, a series pitched as a feel-good comedy, is really a satirical commentary on capitalism: the main character’s rich girlfriend buys him an expensive ticket to the digital afterlife.

Ozark was the most binged show, but comedies were the most commonly binged genre 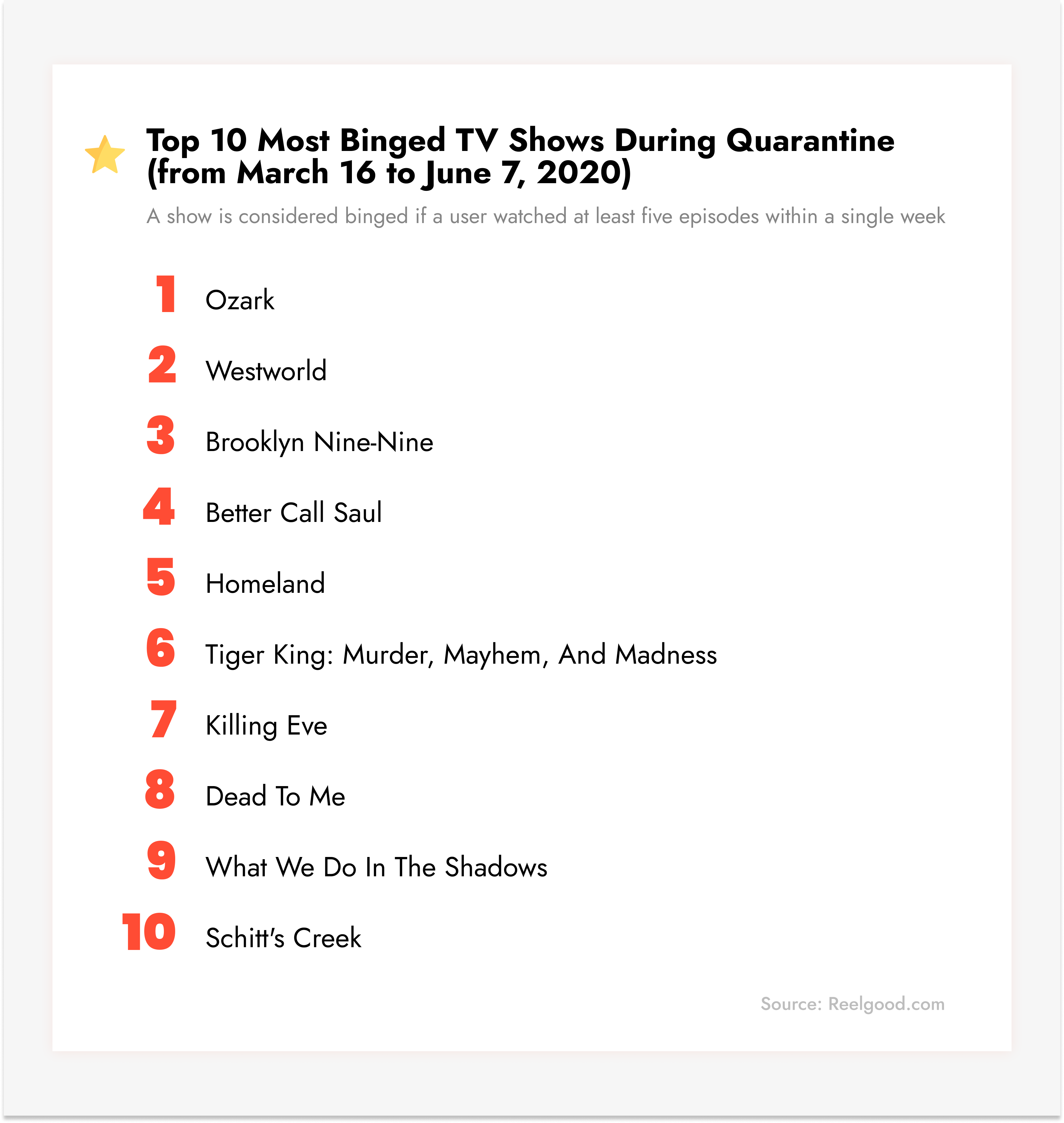 In a previous Flixed analysis, we found that 72% of respondents turned to comedies when they were stressed. While half of the titles in this list of the most-binged TV shows during the quarantine are dense dramas, the other half are comedies. What We Do in the Shadows is a mockumentary about vampires, and Schitt’s Creek is about a formerly wealthy family who move to a small town where they learn to be better people. Better Call Saul is a lighter spinoff of Breaking Bad, in which a lawyer finds his calling working for criminals and Dead to Me is a (very) dark comedy about a pair of women who find increasingly bizarre ways to cover up their respective murders and deal with their guilt. “Brooklyn Nine-Nine” might not have performed as well if the seventh season hadn’t wrapped before controversy surrounding the police reached a fever pitch, but the zany sitcom about a group of cops was able to snag the #3 spot, potentially because viewers were feeling nostalgic for the mundanities of working in an office.

That’s where the similarities end. Every non-comedy from this list comes from widely dispersed genres. There’s a convoluted sci-fi series, a CIA drama, a juicy docuseries, and two crime shows with dramatically different styles. While Ozark is a slow-build that buzzes with the anxiety-inducing feeling of indefinitely hovering on the edge of a cliff, Killing Eve is a quirky thriller with sapphic undertones. Westworld is as confusing as ever, and Homeland is a prickly piece of political commentary that is stacked with soap opera-esque twists. Tiger King offers viewers the opportunity to untangle a true crime story seemingly stranger than fiction

Perhaps the only thread running through these five titles is the unblinking attention that each demands of its viewers. Their tension and overwhelming detail require viewers to detach from the real-world’s seemingly endless flow of dread—the second they look away, they risk missing a juicy detail that could be essential to keeping a handle on the storylines they signed up to follow.