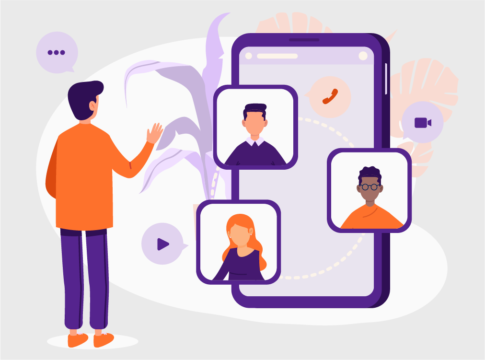 There’s more to the global pandemic than live TV, TV guides, and on-demand TV streaing. In this new abnormal, everyone is also video-chatting: Coworkers, college friends, students, and grandparents alike are staying connected by jumping on conference calls at least a couple times a week. With 95 percent of the country under varying degrees of isolation, people have learned to use the services for work, play, and social interaction.

While people, in general, are obviously spending more time video chatting, we wanted to find out how, exactly, isolation has impacted the way we use the communication tool for social, non-professional engagement. What do people do with their friends when they are video chatting? Does it actually make them feel less isolated? Has Zoom really dominated the industry as much as it seems? We also asked respondents to evaluate nine video chat apps to find out how users are engaging with them and why. 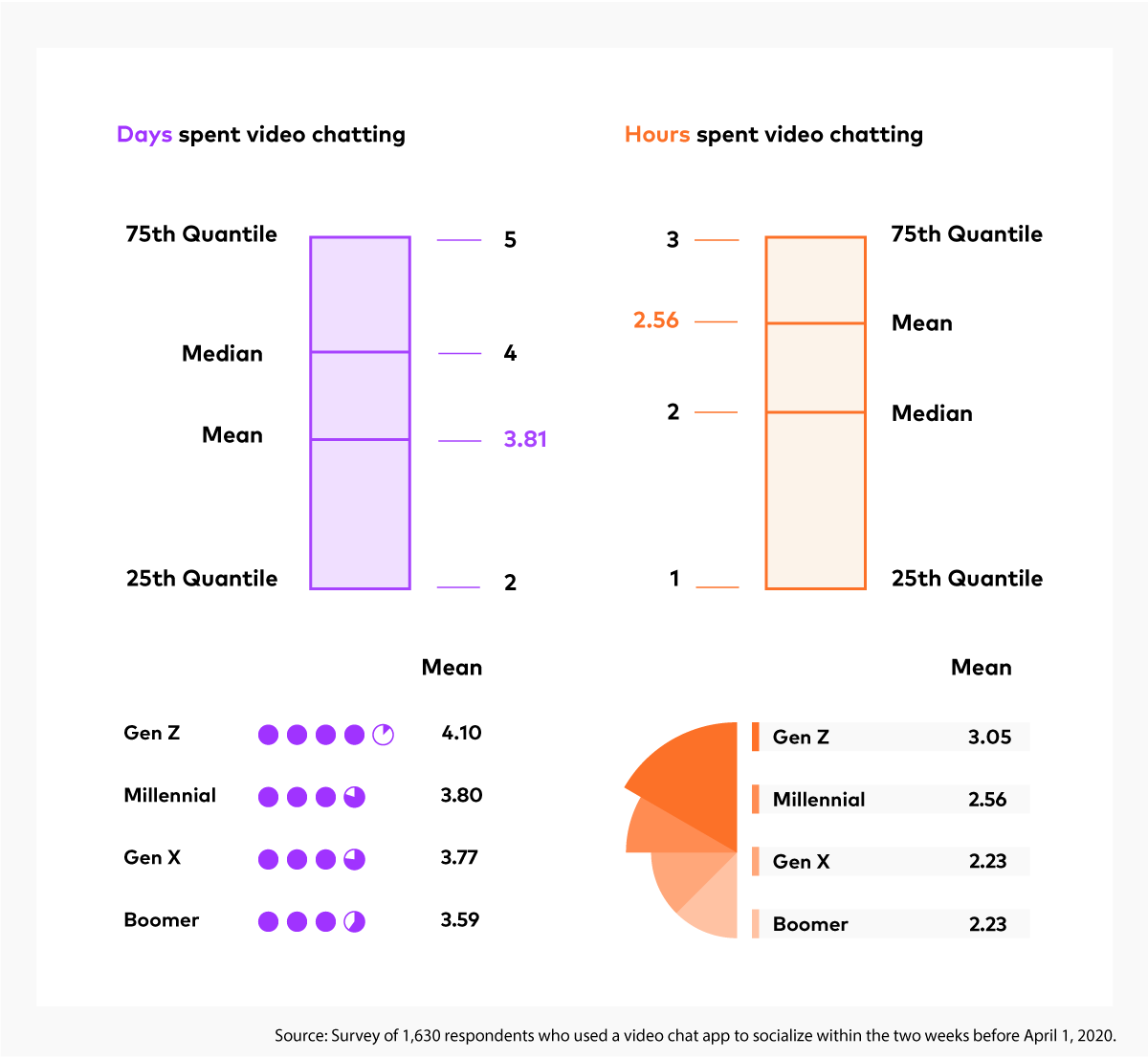 Averaging three hours per day and four days per week, the tech-savvy Gen Z is (unsurprisingly) spending the most time video chatting, but their generational counterparts are following close behind. Even Baby Boomers are clocking in about two hours a day and three days a week on video chat services! Regardless of their age brackets, most people video chat at least twice a week and average about two and a half hours per day. 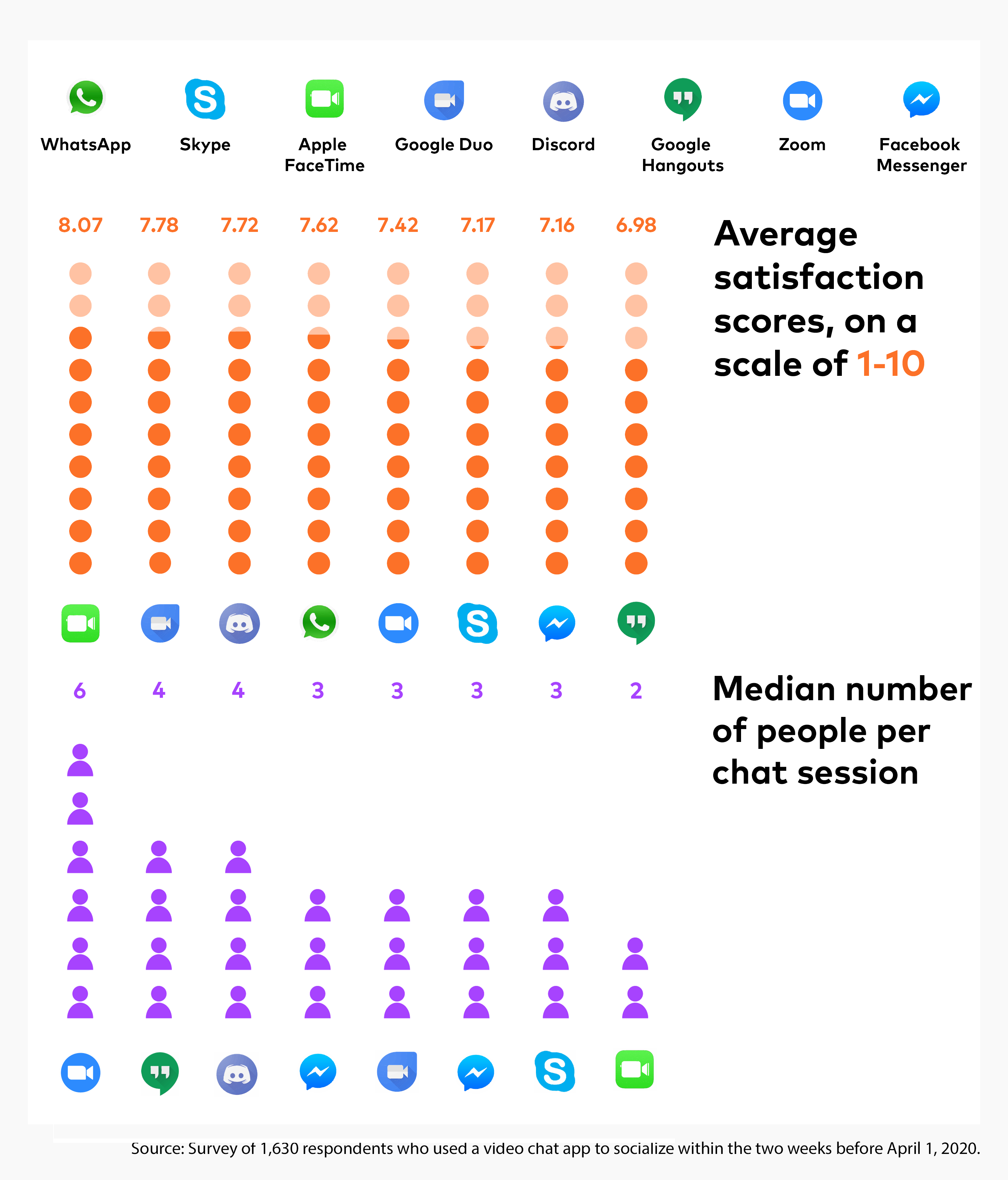 Respondents consider FaceTime to be the easiest service to use, by far: it was ranked highest in terms of video quality and overall satisfaction. However, almost everyone reserved the service for one-on-one calls, and use of the app has barely changed since stay-at-home orders were put in place. Because FaceTime is only accessible to people with Apple products, it makes sense that current circumstances haven’t had a significant impact on the app’s popularity—it is quite likely that users interact with the app in much the same ways they did pre-COVID. 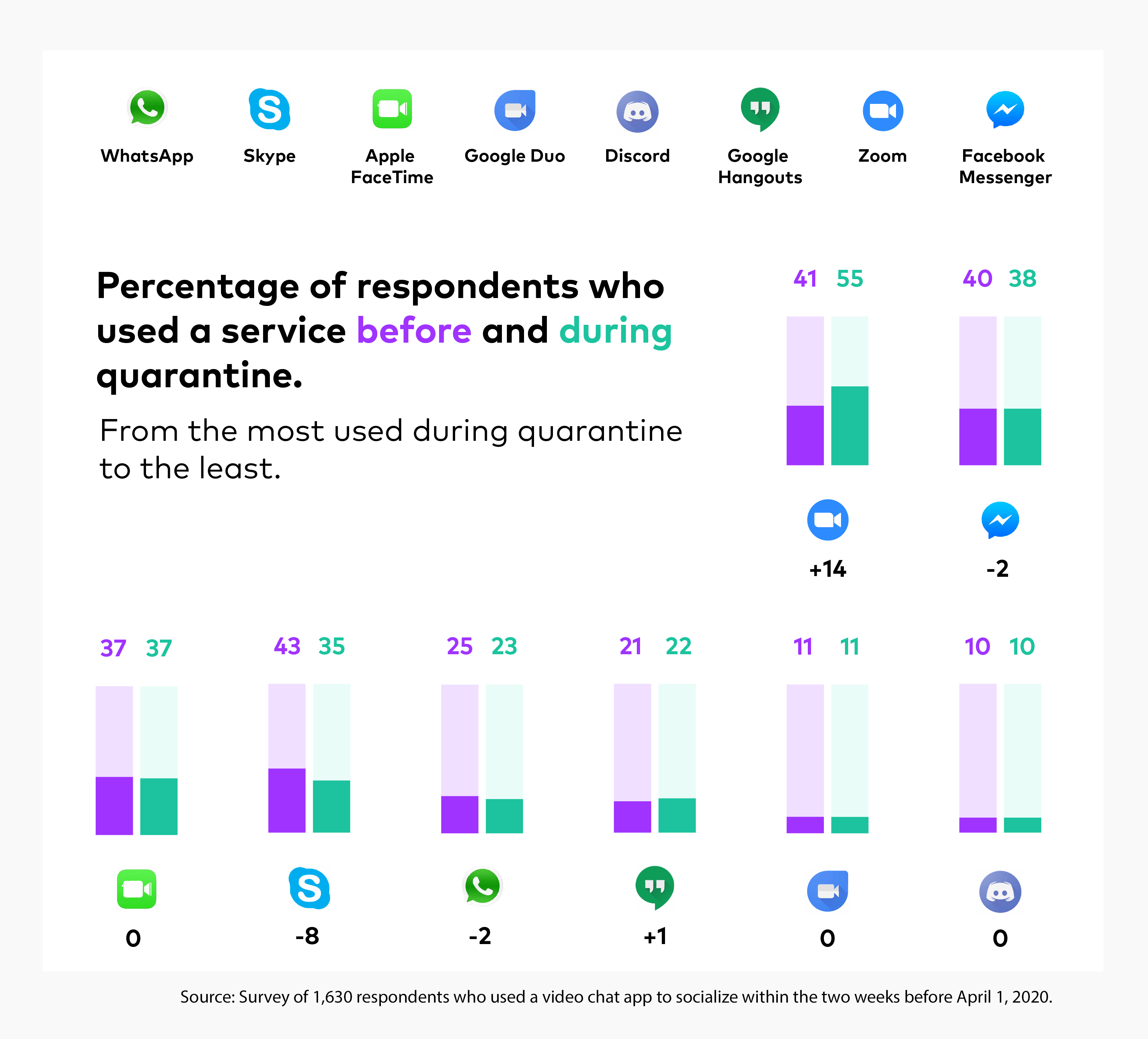 Zoom—a service that, prior to the outbreak, was predominantly used for meetings and webinars—has absorbed most of the new traffic. Zoom experienced a 14-point increase in the percentage of respondents who used it once stay-at-home orders were put in place. The only service that showed such a significant change was Skype, which lost 8 percentage points. 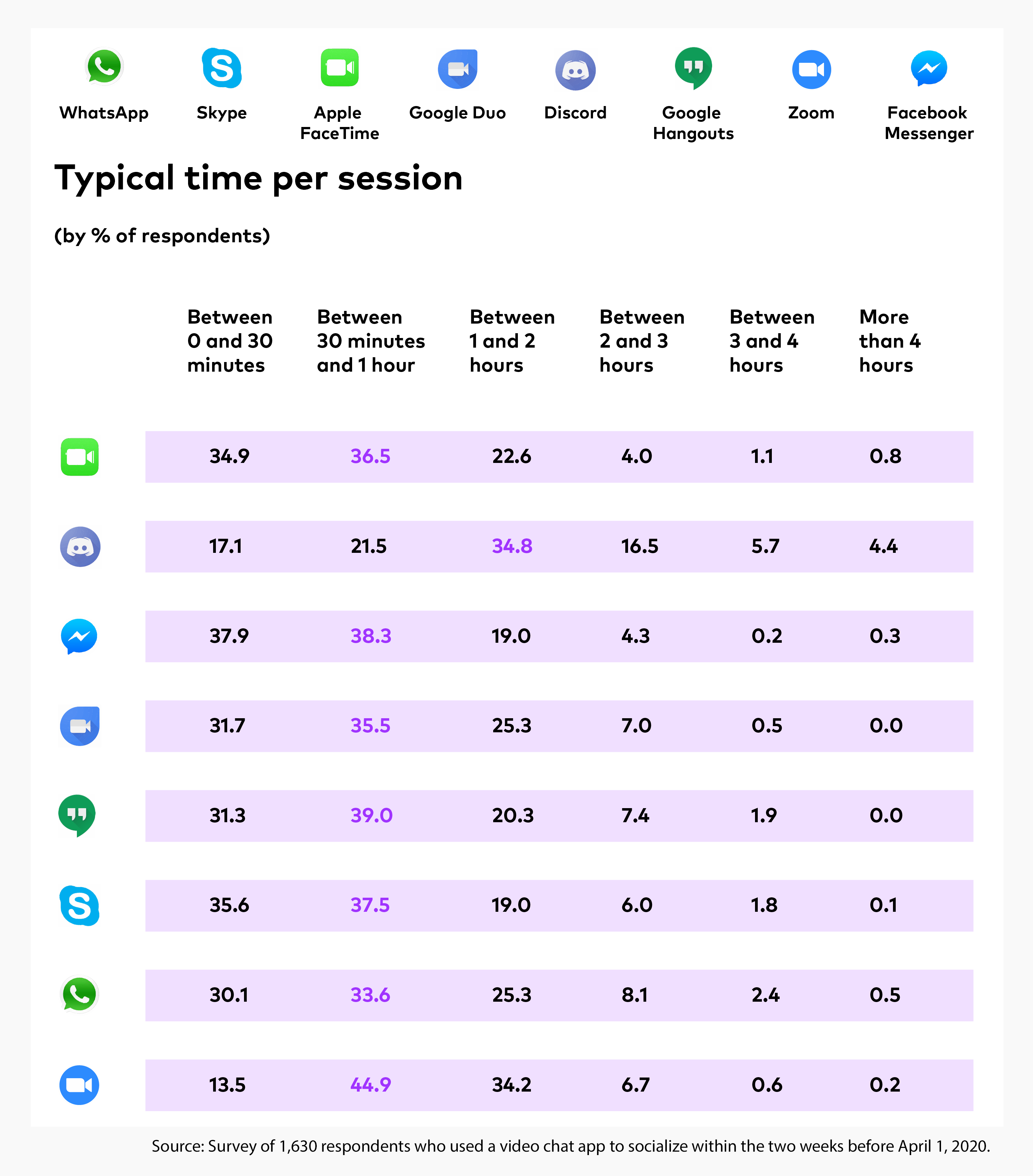 Considering its ubiquitous status, it’s surprising to note that Zoom ranked fifth in terms of overall satisfaction. Evaluations were pretty tepid in terms of its ease of use and audiovisual quality. But Zoom hosts the most populated group chats, which likely accounts for its popularity—you can host 100 participants (or 1,000 participants if you have the premium version), making it perfect for a world in which mass gatherings can only happen virtually.

Although significantly fewer people use Discord, the service received predominantly positive evaluations from those who did use it. Originally built to allow gamers to play together, the service quickly became popular among engineers for its open-source capabilities. What it lacks in simplicity, it makes up for with impressive audio fidelity—more than 48 percent of users said they appreciated Discord’s sound quality—and the range of opportunities it presents. While most limit their video chats to a half hour or so, Discord users spend hours on their servers—its users clocked in the most time of any service. 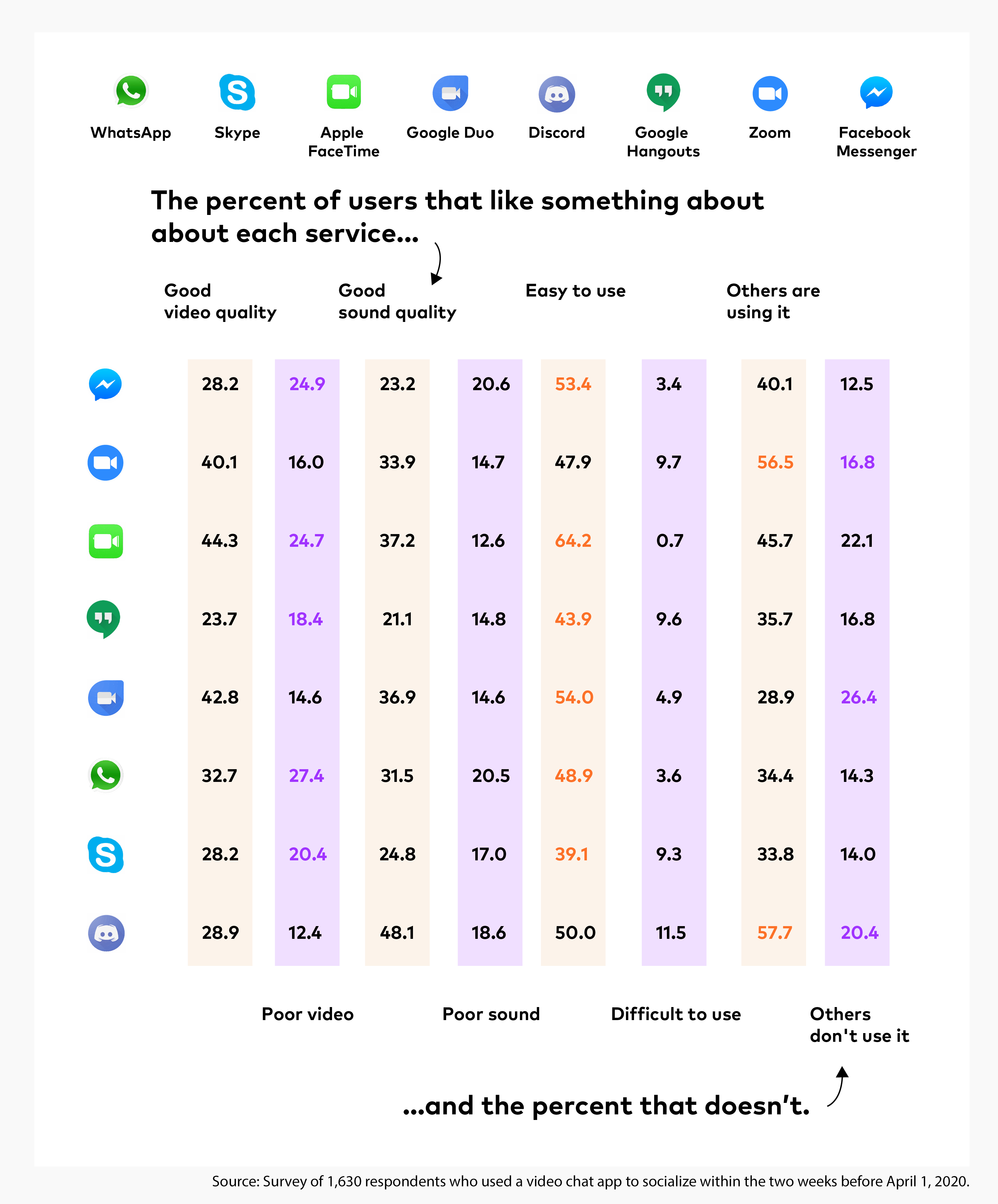 More than 5 percent of people have experienced a Zoombombing, and most people aren’t that worried about it

Unfortunately, the massive influx of users opened Zoom up to the trolls. Of the those who had used Zoom, 5.6 percent had encountered a Zoombombing, or an uninvited participant sharing disturbing video or audio in order to disrupt the meeting. Many users described it as a jarring experience. Their anecdotes ranged from the colorfully inane (strangers dancing to music) to the internet trolls’ common stock of racism and pornography. But all told, most are pretty unconcerned: About 22 percent of respondents said that they weren’t at all worried about it, and about 59 percent said they were less than moderately worried. Only 10 percent registered concern in the upper ranges of the scale.

People who danced with friends on video chat felt the most social, while people who did work together felt the least social 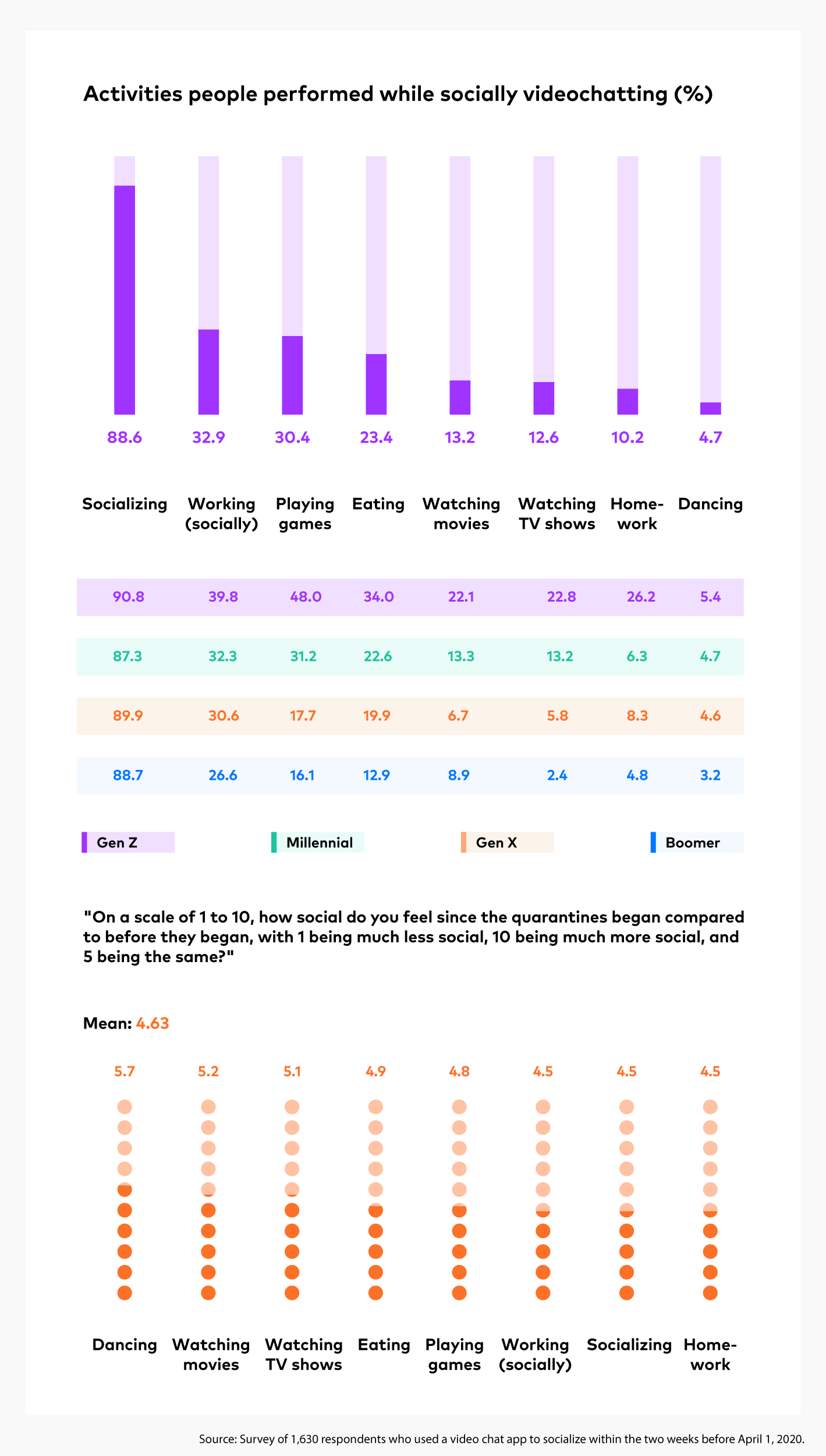 Dancing was the only activity that made people feel more social than they did before joining the chat, but only about 5 percent of respondents reported doing so. Alternatively, people were seven times more likely to do work while on a chat even though this activity actually made people feel less social. Watching movies and TV shows also had a slightly positive impact on how social people felt, but few acknowledged participating in the activity. Gaming while video chatting is quite popular, especially among Gen Z—about half of the under-25 demographic reported using video chat apps for playing games—though it also didn’t have much of an impact on how social users felt.

Jackbox games are the most popular to play in video chat 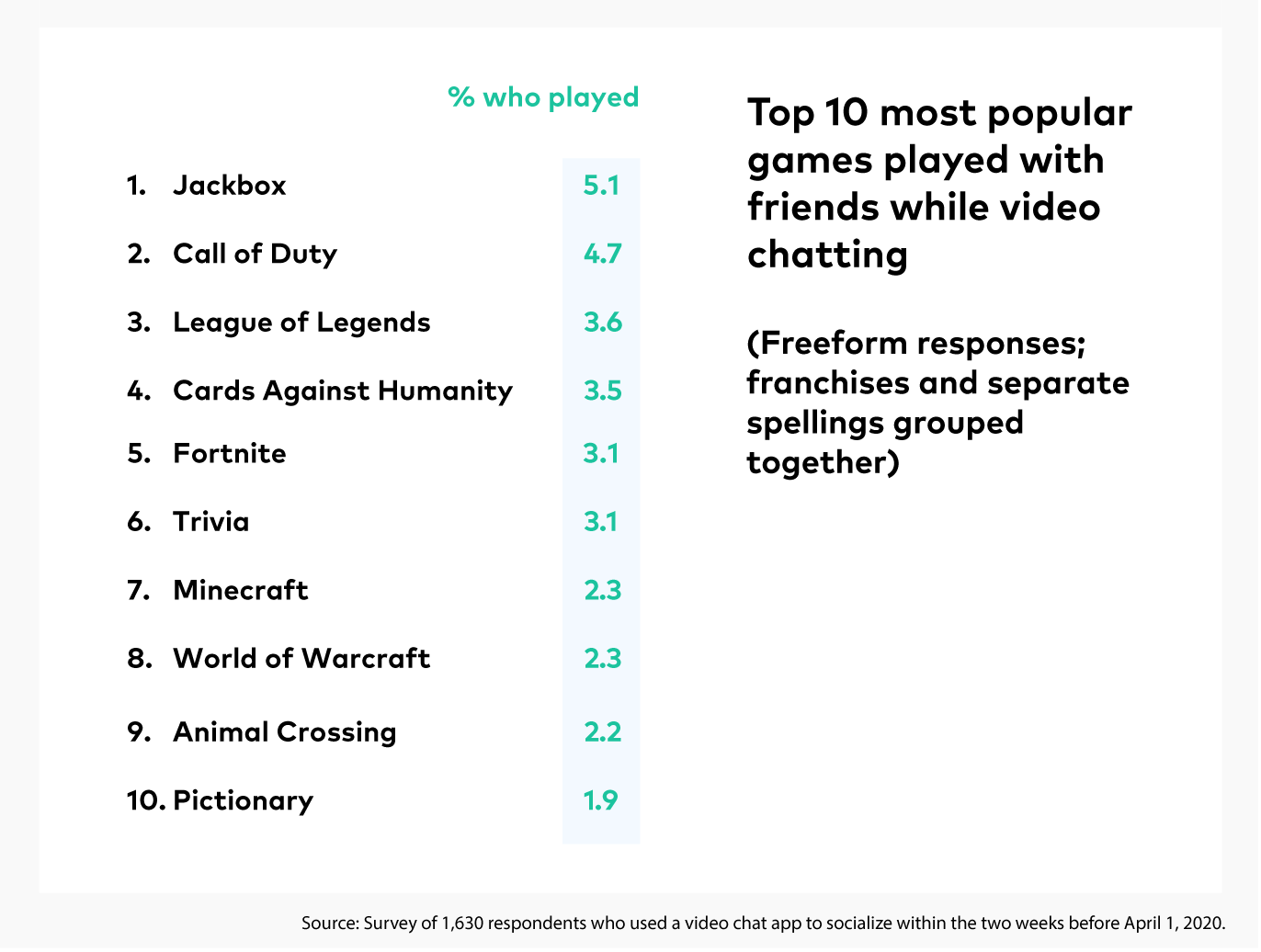 Well-established videogames such as Call of Duty, Fortnite, and Minecraft were among the most popular, but Jackbox games were ranked highest among our respondents, capturing 5.1 percent of respondents. In an interview with Chicago Reader, CEO Mike Bilder remarked that the irreverent party games platform has seen a massive spike in traffic. “The holidays are typically the biggest time of year for us when everyone’s back at home and together,” he said. “ Right now, no one is together, but they’re all together playing over video conferencing and finding a way to still socialize.” With trivia, guessing games, drawing contests, and fill-in-the-blank challenges, it’s possible that Jackbox Games is so prevalent in video chat parties because of how easily it translates to remote play.

1,630 respondents were surveyed on April 1, 2020. Respondents, who were at least 18 years old and based in the United States, self-reported using at least one video-chat app for social purposes in the two weeks prior to the survey. Three video chat apps—Houseparty, imo and Jitsi—were queried but received too few responses (49, 40, and 2, respectively) to accurately measure and incorporate into the analysis.

The age breakdown of respondents was as follows:

The gender breakdown of respondents was as follows: