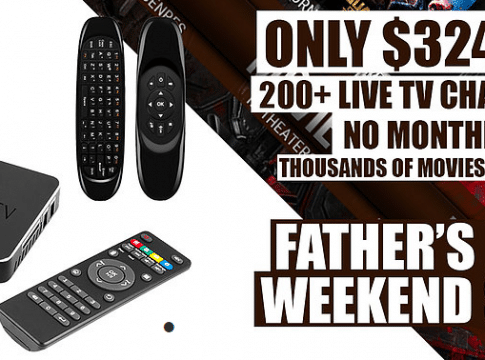 Recently, Netflix, Amazon and Hollywood recently teamed up to file a lawsuit against TickBox – an American internet vendor that specializes in “fully loaded” Kodi boxes. TickBox’s devices are cheap, very easy to use and allow quick access to pirated video content.

Nobody knows for sure how profitable TickBox is – but the company is likely making money hand over fist. In Europe, a vendor selling similar devices reeled in over £40,000 ($52,316 USD) before UK authorities shut him down.

Regardless of what happens to TickBox, copyright holders have a long road ahead of them if they intend to make a dent in the black market for pirating-ready TV boxes. If you type in the right keywords, you can quickly find ads for devices like TickBox everywhere.

On Facebook, a TickBox style operation called JesusBox has a private group with nearly 2,000 members.

The “friendly folks” at JesusBox will help you install and configure pirate add-ons – and they’ll also try to sell you their overpriced $325 “JesusBox,” too.

JesusBox is actually just an ordinary T95 Android TV box from Sunvell that’s available on Amazon for around $50.

JesusBox also tries to get people to pay $20 a month for IPTV – but fans of JesusBox don’t realize that IPTV feeds are freely available via hundreds of different pirate IPTV add-ons.

JesusBox is just the tip of the iceberg when it comes to Kodi-related black market activity on Facebook.

Some of Facebook’s Kodi box vendors don’t even bother creating a website. They just use personal Facebook accounts to advertise illegal devices via public Facebook posts. If individual sellers manage to find interested buyers, they likely use PayPal to collect money.

Other sellers create pseudonyms so that they can sell fully loaded Kodi boxes anonymously.

In September, the EU recently proposed new laws designed to force Facebook to implement better copyright enforcement strategies. Whether or not the new regulations will pass or if US authorities will follow suit remains to be seen.

Team Kodi uses an automated system to flag vendors who sell pirate friendly versions of their media player on eBay. However, despite Kodi’s efforts many ads for fully loaded Kodi boxes are still on the site.

The eBay ad depicted below offers not only “KODI with various video apps pre-installed for movies and shows” but also unlicensed copies of over 8,000 retro video games.

The hardware this eBay vendor is selling is probably just a simple Android TV box that costs around $50. Kodi add-ons are completely free, so every sale results in a profit of around $150.

@TVStixs has sent out over 30k tweets, and most of them are ads for fully loaded sticks and boxes.

Whoever operates the accounts likely manages to avoid getting hit by eBay ad takedowns by describing and marketing his devices on Twitter only.

TVStixs’s eBay ads do not explain what his TV boxes and sticks are designed to do, so they appear to be legit. There’s no way to know that the devices contain pirate add-ons unless you found the eBay ad via Twitter.

Though Amazon seems to have clamped down a bit more than the other sites mentioned above, there are still several ads for fully loaded Kodi boxes on the site.

If the info in the ad’s “Customer questions & answers” section is true, the seller may not even bother to send out the USB stick to anyone who takes a leap of faith and buys one.

In February of this year, Forbes noted that fraudulent sellers were “running amok” on Amazon. The fact that this sketchy ad exists at all on the site is proof that Amazon is still struggling to deal with scammers.

In addition to fully loaded Kodi boxes, one Craigslist seller offers a range of bogus services designed to appeal to people with little to no computer skills.

“I have my own wizard and will install my simple build on all devices. We also can install apps on your phone tablet. iPhone programs that allow you to enjoy all the premium for free. instagram hack. Snapchat hack. Spotify hack. Facebook hack. Pandora with no ads and much more..”

Gumtree is the Craigslist of the UK.

Though Gumtree seems to be using behind-the-scenes filters to prevent its users from using certain keywords, there are still plenty of fully loaded Kodi boxes for sale on the site.

The Gumtree vendor depicted below sells his fully loaded “Android Media Box with Addons” for £75. In the description, he writes that you “just need access to internet and it will open doors to entertainment.”

Oodle is a US-based classified ads aggregator that pulls in classified ads from eBay, Craigslist and other similar sites. Like Google and Facebook, Oodle also generates profit by selling ad space to online merchants.

From the looks of things, Oodle seems to have even fewer restrictions on ads than Facebook and Google. Searching for “kodi fully” brings up sponsored ads that link to illegal fully loaded Kodi box retail sites.

Scrolling through the results pages will take you even further into the rabbit hole. Sellers across the country are competing to cash in on the fully loaded Kodi box trend.

BriskSale is a brand new e-commerce site that bills itself as “the only free marketplace.”

In addition to being fee free, BriskSale also seems to be free of moderation as well.

One BriskSale ad promises access to ESPN, Disney, a handful of other cable channels.

“Do you like to watch cartoon, Disney, HBO, Showtown, ESPN, live MLB games including Yankees, Mets. What about latest movies such as Furious 7, Jurassic World…But you don’t like the monthly cable bills or the $12 movie ticket?”

The site BoxKodi.com provides a good example of how what a typical fully loaded Kodi box retail site looks like.

Rather than using social media or blog posts to lure in customers, BoxKodi simply buys ads on Google, Oodle and other commerce sites around the web.

According to SEMRush, BoxKodi has to pay Google around $11 USD every time someone clicks on a BoxKodi ad after searching for “tv box” on Google. However, if even a small percentage of those clicks turn into sales, BoxKodi can still earn a nice profit.

It’s easy to see why people who aren’t computer savvy might be tempted to click the “buy” button if they see an ad that promises free access to TV shows and movies. Most people pay around $100 per month for cable in the US. If their fully loaded Kodi box allows them to cancel their cable TV subscription, they may think that they’ve snagged an incredible deal.

Even if fully loaded Kodi box owners realize that the hardware they’re getting only costs $50, they may go ahead and pay a few hundred dollars extra just to avoid the hassle involved in installing Kodi add-ons themselves.

The Kodi app is easy to get because it’s on Google Play. However, to get Kodi add-ons you have to do some research. Finding an add-on installation guide that works can be a challenge because the people that make pirate add-ons rarely write documentation.

Because ads for fully loaded Kodi boxes are everywhere, black market purveyors of Kodi hardware appear to be thriving. A cursory look around the web reveals ads on nearly every major e-commerce and social media website.

Pirates post promotions constantly, which suggests that they are likely making money – and possibly lots of it.

Exact figures about how much they’re making on average are hard to come by, but one eBay vendor that sells fully loaded Kodi boxes has over 4,500 sales to his name. That’s likely over $400,000 in revenue.

Betzen pointed out that nobody owns Kodi – so anyone who knows how can create their own version of the Kodi player. If Betzen decided to have his team lock down Kodi, someone would likely release an unrestricted, pirate friendly version of the player the very next day.

The thousands of unlicensed sites that Kodi add-ons link to for content represent an additional can of worms for copyright enforcers to sort out. Even if authorities could stop the pirate “video lockers” in Europe and the US, there’s little anyone can do about sites located in “piracy bastions” like Ukraine.

Will Kodi pirates keep on selling fully loaded boxes or will authorities manage to shut them down? Let us know what you think in the comments section below.