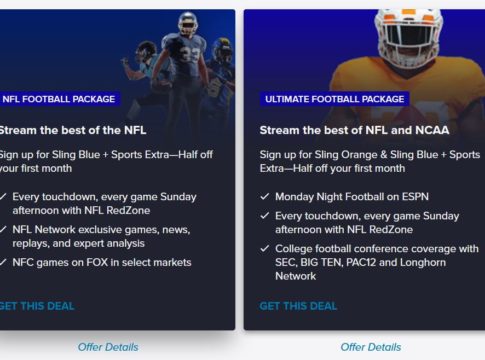 The NFL is the most popular sports league in the US, with countless fans across the country cheering on their favorite teams and players each weekend. In the past, if you wanted to watch NFL games live on TV, you had to have cable, but that’s no longer the case.

Nowadays, thanks to live TV streaming services and cable alternatives, there are plenty of other ways to catch the action from teams like the Philadelphia Eagles and Tampa Bay Buccaneers. And one of the easiest and best ways to watch NFL at home is with Sling TV. Read on to learn more about Sling football streaming.

How to watch the NFL without cable

Luckily, all of this is possible with the help of Sling TV. Sling TV is a live TV streaming service that offers a range of channels spread out across two color-coded packages: Orange and Blue. You can pick either of these plans, or opt for the Orange + Blue plan to get everything in one.

The Sling TV Blue plan is perfect for Sling football fans. It provides access to the NFL Network, which lets you watch preseason, international games, a Christmas Eve game, and more. You also get access to Fox and NBC sports channels on the Blue plan for local and Sunday night games.

The Sling TV Orange plan is also worth looking at for Sling football streaming, as it comes with ESPN. ESPN hosts Monday Night Football, with around 17 games in total across the season. So, if you want as much football as possible, you may want to consider the Orange + Blue plan.

Not only that, but Sling TV also has an optional add-on called Sports Extra. This gives you access to NFL RedZone, which lets you watch Sunday afternoon games as well. So, if you get the Orange + Blue plan, as well as the Sports Extra add-on, you’ll have lots of games to watch.

Can you watch every NFL game on Sling TV?

If you’re a big NFL fan, you’ll know that the broadcasting rights for the league are a little complex, with games spread out across a wide range of networks and channels, from ESPN to FOX, CBS, and more.

Sling TV is pretty comprehensive in its NFL coverage, but it doesn’t have CBS included in any of its packages, so you won’t be able to watch the games on that particular network and you may want to consider an alternative service. Check out our Sling TV channel list to learn more.

Which NFL teams can I watch on Sling TV?

As explained above, Sling football coverage only extends to NFC teams, and not all of the teams are included. Most NFC teams have their games shown on local Fox affiliates, but two of them – New Orleans and Charlotte – do not currently have a local Fox affiliate on Sling.

So, when we take this into account, as well as Sling TV’s other possible channels like ESPN, NFL Network, and NFL RedZone, fans will be able to watch the following teams:

Can I watch the Super Bowl on Sling TV?

Since Sling TV has Fox sports, it will be possible to watch the next Super Bowl on Sling TV. However, future Super Bowls on other networks may not necessarily be shown on this service.

Whether you want to watch Tom Brady throwing passes for the Tampa Bay Buccaneers or keep up with the Dallas Cowboys’ latest games, Sling TV is a great choice. It offers a lot of NFL content, particularly for fans of NFC-based teams, at a very fair price.

If you’re not yet convinced, you can take a look at our complete Sling TV review for more information about this streaming service to see if it’s right for you. Check out our additional guides on how to watch NFL on Nvidia Shield TV, Roku, Amazon Fire TV, Apple TV, or how to watch the Super Bowl without cable.