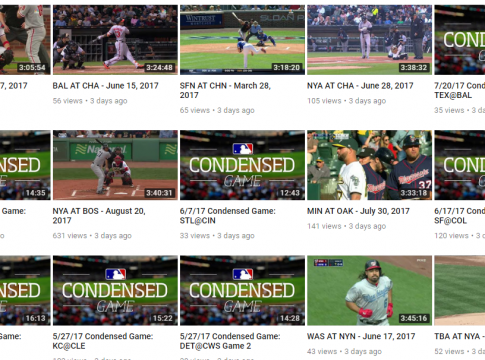 You can watch MLB games live without cable with one of the following options: fuboTV, Hulu with Live TV, Sling TV or YouTube TV. In this article, we’ll help you decide which streaming option is best for you. Let’s get started!

fuboTV is one of the best sports-oriented streaming services out there, but it’ll get even better when ESPN lands on fuboTV next month. The lack of TBS is a downside for baseball fans, though. However, fuboTV does have great local TV affiliate support and lots of niche sports channels you won’t find elsewhere.

The fubo Standard package comes with around 90 channels, half of which are sports channels. Various add-on packs let you get even more channels.

To learn more about fuboTV’s pricing and packages, click here.

Roughly half of the channels in the basic lineup are sports channels. Many of the sports channels that fuboTV carries are not carried by competing streaming services. ESPN isn’t a part of the menu now, but it will be soon. TBS isn’t on the roster, though. On the other hand, fuboTV has signed most of the local FOX affiliates in the US. In addition, fuboTV’s own fubo Sports Network is a decent supplement for ESPN in many ways. MLB Network is available, but you have to buy an add-on pack to get it.

fuboTV has above average device support. Whichever app you use to watch TV, fuboTV is likely compatible with it.

fuboTV lets you watch TV on two devices at once. If you have a larger number of people you intend to share your account with, you can upgrade to three streams.

fuboTV offers a cloud DVR service, which lets you record up to 30 hours of video without any additional costs. The Cloud DVR Plus add-on costs extra but boosts your recording limit to a rather impressive 500 hours.

fuboTV’s on-demand library isn’t huge, but it has a decent amount of content.

Hulu with Live TV‘s major selling point is its huge on-demand catalog. When there’s nothing interesting on live, you can choose from thousands of TV episodes and movies. Another nice thing about this service is that it has good local TV station coverage. It has all the major ESPN channels, but lacks MLB Network.

Hulu’s main subscription plan comes with over 60 other cable TV staples. The cost is comparable to what other services charge.

Hulu with Live TV’s base plan includes ESPN– and as mentioned above, its support for local TV broadcast stations is quite good. However, there’s no way to get MLB Network through Hulu with Live TV.

If you hate commercials, you may want to consider buying Hulu with Live TV’s DVR upgrade. Without it, you’ll have to sit through repetitive advertisements when you watch your recordings.

Hulu has one of the largest libraries of on-demand content on the internet. Hulu with Live TV subscribers can watch Hulu originals and all the other shows and movies for free.

If you like the idea of creating your own TV channel lineup, you may want to look into Sling TV. Sling TV was one of the first streaming services to hit the market and it’s still the leader when it comes to customization. It’s a great way to catch MLB games and all kinds of other sports, as well.

Sling TV offers three options for new subscribers. You can choose between two base plans or get both base plans for a discounted price. After you get a base plan, you can expand your entertainment options by purchasing channel add-on packs. Sports Extra is one of the best options for sports fans in this regard. It will give you access to MLB Network and several other sports channels.

With Sling Blue, you get three simultaneous streams. That’s more than industry standard (which is two streams), and more than you’d get with Sling Orange (only one stream).

Sling TV finally upgraded its poor DVR features a few months ago. At last, you can record ESPN and other Sling Orange channels. Previously, Sling TV had blocked its users from recording Sling Orange content. In addition, you no longer have to pay to use the DVR. Everyone gets ten hours when they join.

Sling TV does have an on-demand content library, but it’s somewhat limited compared to some streaming services.

Google’s YouTube TV is another one of the few streaming services that carries both MLB Network and TBS.

One of the best things about YouTube TV is its excellent support for local TV stations. You also get MLB Network, ESPN and TBS.

Now that the YouTube TV app is back in the Amazon app store, YouTube TV has excellent TV device support.

YouTube TV’s has an unlimited cloud DVR. You don’t have to pay extra to use it, either.

YouTube TV has an above-average on-demand library compared to other similar services.

How to Watch MLB on Amazon Fire TV

You can watch MLB on Amazon Fire TV with one of these streaming services: fuboTV, Hulu with Live TV, Sling TV or YouTubeTV. Free trials will let you find out how you like each service. Just download the apps from the Amazon app store to get started.

How to Watch MLB on Roku

You can watch MLB on Roku with one of these streaming services: fuboTV, Hulu with Live TV, Sling TV or YouTubeTV. Go to Roku’s app store and download the app that meets your entertainment needs.

How to Watch MLB on Apple TV

You can watch MLB on Apple TV with one of these streaming services: fuboTV, Hulu with Live TV, Sling TV or YouTubeTV. Apple’s app store has all the apps. They all have free trials, so you could even install them all on your Apple TV if you want to compare them.

MLB TV is by far the best way to catch all the MLB games. Subscription prices are cheap and you can live stream all 2,430 MLB games including the World Series.

However, if you can’t watch an MLB game somewhere on TV, don’t expect to be able to catch it via MLB TV. All the usual blackout rules still apply when it comes to video streams. (You can, however, listen to any MLB game via MLB TV regardless of blackouts.)

Thanks to a recent class action lawsuit that forced the MLB to lower the cost of its live streams, you can gain access to the best MLB TV subscription for just over 100 bucks. At the beginning of the 2018 season, a premium subscription to MLB TV cost just $112.99. Because of the lawsuit, the MLB cannot legally raise its prices by more than 3% next year.

The longer you wait to buy a season pass, the less you’ll have to pay, which makes sense, given that you’ll be missing out on part of the MLB season. For example, in June of 2017, MLB TV lowered the premium subscription fee to $100 and by the time September rolled around the price had dropped all the way to $4.

At the beginning of the 2017 season, MLB TV kicked things off by announcing four new features.

Team view lets you “enjoy a team-centric experience” on all your devices. In other words, you can now change the look and feel of the MLB TV interface to reflect your favorite MLB team.

The new MLB TV Alexa skill allows you to pull up an MLB audio feed by saying “Alexa, open MLB.”

Now, there are MLB TV apps for Android TV, FireTV, Xbox and Roku. Check the official At Bat site for the full list of compatible devices.

2017 was the first time you could stream the World Series via MLB TV.