You don’t have to be a computer expert to find your way around Netflix’s geo-block. All you need is a subscription to a VPN that’s committed to helping facilitate what’s known as “geo-hopping.” And that means yes, you can get American Netflix in the UK, even though Netflix is still attempting to block access.

Some VPNs are more “geo-hopper friendly” than others. If you want to find out which VPN services help their customers get to American Netflix (and which ones don’t) you’re in the right place. Keep reading to find out how to gain full access to the Netflix catalog.

Use a VPN to Watch US Netflix in the UK

We’ve tested several of the most popular VPNs on the market. We found that there are several VPN services that do a good job of getting past the Netflix VPN blocking.

When it comes to choosing a working VPN service to access Netflix in the UK, we find that a good VPN service for American Netflix access should have all of the following:

All of our testing leads us to recommend ExpressVPN as the best service to meet these criteria. ExpressVPN has hundreds of US servers to choose from. Their service masks your IP address and utilizes an obfuscation method called “Scramble” to hide your VPN connection. ExpressVPN also uses high-level encryption standards, although much of its operation is purposefully shrouded in secrecy to help circumvent the Netflix VPN banning methods.

Through testing, we’ve found excellent bandwidth through ExpressVPN. You’ll experience some slow down in speed, but this is minimal compared to many other services. Another thing that we like about ExpressVPN is that it’s one of the few services that rarely has servers go down when accessing American Netflix from the UK.

ExpressVPN also throws in their unique servers dedicated to bypassing Netflix VPN bans as an added benefit to purchasing a subscription.

How to Watch American Netflix in the UK Using ExpressVPN

In order to download the ExpressVPN client, you’ll need to sign up for your account first. StrongVPN offers three packages, with steep discounts for purchasing the 12-year subscription.

Here’s a quick guide to get you started with our recommended VPN service, ExpressVPN.

After logging into your new account, look to the right side of the screen to find your ExpressVPN client download. Click on it to download the software. It should automatically download the correct software for your operating system (either Windows or Mac):

After downloading the client, you will then find the correct file in your downloads location. Just double-click it to load up the install process.

Step 3: Pick any US city

To unblock Netflix in the U.S., you’ll just need to select any available U.S. server.

Click on the “Choose Location” button on the bottom right of the application window. 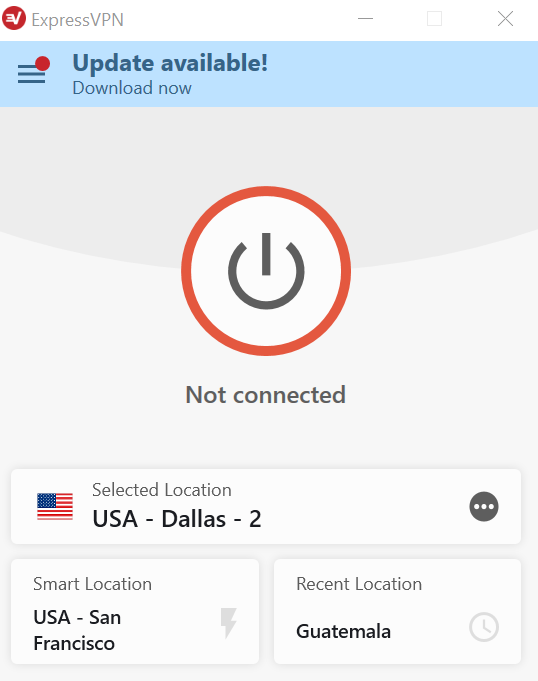 Next, find and select any U.S. server location. Double-click the name of the server to connect. 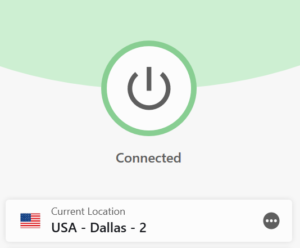 Step 4: Load up Netflix and enjoy your shows!

Some VPNs require you to turn on obfuscation methods to work. Not ExpressVPN. You can load up your server and access Netflix right away!

As you can see, our VPN is connected to a U.S. server, and we’re accessing Netflix without a warning message:

If you try to connect to Netflix with a VPN that doesn’t work with the service, you’ll get a warning message about VPN or proxy usage. You won’t get that message with ExpressVPN thanks to the service’s dedicated methods to bypass the VPN detection methods Netflix employs.

Step 5: What to do if you’re still getting blocked

At times, you may try to connect to Netflix through ExpressVPN and still get a message about proxy service usages. It looks like this:

If you’re still getting that message, you may need to get assistance directly from ExpressVPN regarding which server to use. At times, the company switches which servers work to bypass American Netflix. This helps them stay on top of the proxy ban. The fastest way to solve this problem is to go to ExpressVPN’s website and load up the live chat. They’ll ask for the email address you used to sign up to verify your account. Afterward, just ask which server you should be using to properly gain access.

Browse Netflix from the UK using the Browser Plugin

One easy way to reduce the load on your system is to use the ExpressVPN browser plugin. ExpressVPN offers browser plugins for both Chrome and Firefox. These plugins let you connect to the server you want and offer most of the same functionality as the app. Should you need a lighter experience and only need to extend VPN coverage to your browser, the plugin is an easy solution.

According to the company blog, Firefox Lite support is also on the way. A Firefox Lite plugin will roll out to users in India, Thailand, Indonesia, and the Phillippines, but will later be available across the world. Users in those countries will also get an exclusive 7-day free trial, which is uncommon as ExpressVPN typically only offers a 30-day money-back guarantee instead.

How Does Netflix Block VPNs?

For the most part, VPN technology is nothing new. Virtual Private Networks have been used for decades, mostly by businesses that have employees that need remote access. A virtual private network creates a secure tunnel between the user and the hosting server, allowing for remote access to a server that otherwise would not be accessible to the user.

For businesses, the benefit was the ability for employees to securely connect to private company servers to gain access to important files. VPN technology has a distinct consumer purpose, however, that allows users to connect, not to company servers but to remote servers that simply provide access to a different internet service provider.

If you’re in the UK, this means connecting to a remote server located in the United States that is itself connected to an American ISP, such as Comcast, AT&T or Time-Warner. A VPN service will not change your ISP outright. It still needs your home ISP to make the connection, but it will hide your viewing activity from your ISP while connected to the VPN servers.

To be clear, Netflix does not openly explain how they block VPNs or proxy services. While little is known of their blocking methods, what we do know is that the company has developed and is continuing to improve its own, proprietary filtering methods.

What to Watch on American Netflix

The U.S. version of Netflix has been getting smaller, but Netflix has also increased its focus on a variety of more popular TV and movie content for its home base. If you’re accessing American Netflix from the U.K., you may find the following shows right up your alley.

Highly popular in the US, this dramatic reality TV show is only available through US Netflix libraries. If you’re a fan of reality TV and love shows like this one, a VPN + Netflix is the best way to stream it from the UK.

Yes, the U.K. has enough crime dramas to fill the English Channel. But the U.S. as well as its fair share of quality crime dramas, with NCIS being among the most popular around. The show has had staying power for years, and for good reason. It found a metric that strikes just the right chord with audiences. Since you won’t find this one in the U.K. Netflix library, you’ll need to get access to American Netflix to enjoy it.

Medical dramas abound on American TV, but few are as highly respected or highly decorated as Grey’s Anatomy. Borrowing its name from the well-known book on the human body from Hippocrates, (from which we get the term “Hippocratic oath”), Grey’s Anatomy is the type of show for those that love good drama, intense emotions, and excellent storytelling.

There are a large number of Marvel-to-TV shows on Netflix that you won’t find in the U.K. Netflix library. One of them is the popular show The Flash. This show features the fastest Marvel character to date, doing what he does best: quick actions and an even quicker wit.

America loves cooking shows and traveling shows, and Anthony Bourdain: Parts Unknown is a perfect combination of the two. You can watch as the famed chef and travel author explores different parts of the world and their local culinary fares. You might even get inspired to try your hand at a new recipe or two!

What’s next for Netflix’s UK-based customers?

Will Netflix continue to fight a losing battle, or will they relent and stop attempting to block VPN users from accessing their sites?

Here’s what Netflix CEO Reed Hastings had to say about VPN geo-hoppers in April of 2016.

“IT’S A VERY SMALL BUT QUITE VOCAL MINORITY. IT’S REALLY INCONSEQUENTIAL TO US.”

In light of this comment, Netflix doesn’t seem to be very serious about preventing VPN users from accessing their services. And experts say that Netflix’s current strategy won’t work in the long run. Daniel Berntsson of Mullvad VPN has called Netflix and their content providers “silly” and “stuck in a laughably outdated geographic distribution model.”

Will Netflix’s war on VPN providers continue, or will they eventually relent and give up trying to enforce regional copyright licenses?  Let us know your thoughts in the comment section below.