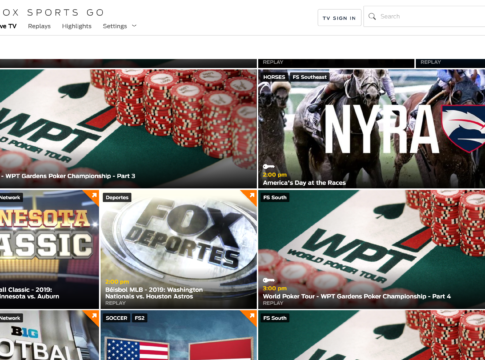 AT&T TV NOW is currently the only streaming service that lets you watch Fox Sports Oklahoma without cable. However, Hulu with Live TV, fuboTV, Sling TV, YouTube TV all support the Fox Sports Go app, which can be used to access Fox Sports Oklahoma content. In this article, we’ll help you decide which streaming option is best for you.

AT&T’s AT&T TV NOW is expensive, but the fact that some of the plans are bundled together with HBO Max may make it worth considering. Several new feature upgrades that came out in 2020 have made this streamer a lot more competitive overall.

There are two main plans: an inexpensive basic one called Plus and a pricey one called Max. Max comes with the HBO Max on-demand service.
For more information about AT&T TV NOW plans, click here.

Fox Sports Oklahoma comes with both of the two main plans. You can access it directly through the AT&T TV NOW app.
Click here to see the full list of AT&T TV NOW channels.

The three-devices-at-a-time limit is on par with what other streaming services offer in terms of account sharing.
To learn more about AT&T TV NOW’s simultaneous streams, click here.

You get a full 500 hours of recording time when you subscribe at no extra cost. This is a big improvement, since this streamer lacked recording features at launch.
Click here to learn more about how AT&T TV NOW’s DVR works.

Hulu with Live TV is probably your best bet if you’re shopping around for streaming services and you don’t already subscribe to Netflix. All subscribers get full access to the main Hulu on-demand site. You can get Fox Sports Oklahoma content, but not through the main app. You have to use your credentials to unlock Fox Sports Go instead.

Like other streaming services, Hulu with Live TV has raised its subscription prices several times over the past few years. However, it’s also added new channels as well. It’s about even with the competition when it comes to pricing. Few other live TV streaming services include a full-featured on-demand service with their subscriptions.
For more information about Hulu with Live TV’s plans, click here.

Hulu with Live TV’s DVR is quite good as well, but only if you upgrade it. The standard DVR feature lacks a fast forward feature. This is a significant downside because it means that you have to sit through all the commercials you record. The upgrade removes this restriction and boosts the DVR’s capacity from 50 to 200 hours.
Click here to learn more about Hulu with Live TV’s DVR.

This is one of the service’s strongest benefits. You get a full subscription to the main Hulu app when you subscribe to the streamer’s live TV service.
Click here to learn more about Hulu with Live TV’s on-demand library.

News that fuboTV would finally be adding ESPN put this sports-oriented streaming service in an entirely new category. The company launched without ESPN. It tried to compensate for the lack of ESPN by signing deals with channels that other streaming services don’t carry and by producing its own sports news content. Now that ESPN is part of the lineup, it’s an even better deal for sports nuts.

fuboTV costs about the same as most other streaming services. All subscribers get the same core package of channels, but premium subscribers gain access to better features and additional channel packs.
Learn more about fuboTV’s subscription plans here.
*Note that in order to see the Family, Entertainment, and Ultra plans, you need to first press "Start Free Trial." After you create an account, you'll see all of these plans.

The main thing that’s different about fuboTV relative to other streamers is that its core channel pack is heavy on sports channels. In fact, about half the channels that are in that core lineup are sports channels. Some of those sports channels– like NBCSN and FS1, for example– air live 4K content.
You can get Fox Sports Oklahoma through fuboTV, but the only way to actually open the stream is by logging in through the Fox Sports Go app. Your fuboTV credentials will unlock the Fox Sports Oklahoma stream. For some reason, the channel isn’t directly accessible through the main fuboTV app.
You can see a full channel list here.

All the main streaming hardware brands that are popular among cord-cutters have fuboTV apps. You can stream fuboTV on Apple TVs, Rokus and many other devices.
You can learn more about fuboTV’s supported devices here.

A major upgrade in this feature category came last year when fuboTV introduced a five-stream upgrade option and boosted the base stream limit to three streams. This improved flexibility makes this streamer a good option for families.
You can learn more about fuboTV simultaneous streams here.

30 hours is the initial limit for the DVR, but a paid expansion boosts the DVR capacity to 500 hours. You get the DVR upgrade automatically when you buy many of fuboTV’s premium plans. There’s also a new 1000-hour DVR that debuted last year.
You can learn more about the fuboTV DVR here.

It’s worth noting here that fuboTV has its own sports channel, fubo Sports Network. Most of the on-demand content consists of recently aired episodes and programs, but there are some movies to watch as well.
You can learn more about the fuboTV’s on-demand library here.

Another cable alternative that offers Fox Sports Oklahoma is streaming pioneer Sling TV. Sling TV was one of the very first streamers to hit the market and it’s also one of the most customizable streaming services out there.

Designed to allow its users more control over the channels they get, Sling TV’s subscription models are unique compared to what other streamers offer. Instead of one base plan, there are two different ones to choose from: Sling Orange and Sling Blue. Various channel add-ons let you customize these plans with additional channels.
* You get 1 stream for Sling Orange channels and up to 3 simultaneous streams for Sling Blue channels.
To learn more about Sling TV pricing, check here.

As is the case with fuboTV, Sling TV doesn’t offer native support for Fox Sports Oklahoma. You’ll have to log in through Fox Sports Go to watch it. In terms of other sports channels, Sling TV offers above average variety.
To learn more about Sling TV channels, check here.

You can stream Sling Blue channels to three devices at the same time, but Sling Orange channels can only be streamed to one device.
To learn more about Sling TV’s simultaneous streams, click here.

Ten hours or recording time is what you start out with. An upgrade boosts the limit to 50 hours.
To learn more about Sling TV’s DVR, check here.

One of the best things about Google’s YouTube TV is that it offers above average support for local channels and regional sports networks. The unlimited cloud DVR is another strong perk.

How to Watch Fox Sports Oklahoma on Amazon Fire TV

You can watch Fox Sports Oklahoma on Amazon Fire TV with one of these streaming services: Hulu with Live TV, fuboTV, Sling TV, AT&T TV NOW or YouTube TV. Simply go to the Amazon Fire TV app store and click whatever live TV service appeals to you the most– or try them all.

How to Watch Fox Sports Oklahoma on Roku

You can watch Fox Sports Oklahoma on Roku with one of these streaming services: Hulu with Live TV, fuboTV, Sling TV, AT&T TV NOW or YouTube TV. The process of installing a Roku app is the same as installing a smartphone app. Just look up the app you want to try and complete the sign-up process to get going.

How to Watch Fox Sports Oklahoma on Apple TV

You can watch Fox Sports Oklahoma on Apple TV with one of these streaming services: Hulu with Live TV, fuboTV, Sling TV, AT&T TV NOW or YouTube TV. Apple’s app store has them all, so try them out for yourself and compare.