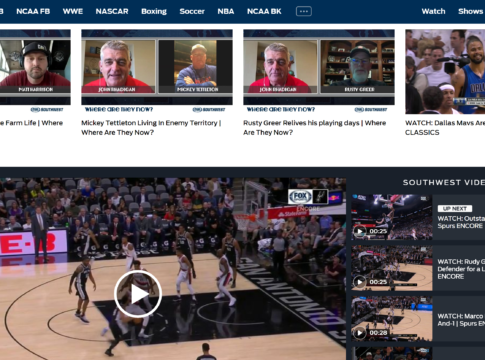 You can watch Fox Sports New Orleans without cable with one of these streaming services: Hulu with Live TV, fuboTV, Sling TV, AT&T TV NOW or YouTube TV. In this article, we’ll help you decide which streaming option is best for you. Let’s get started!

Hulu with Live TV is still about average with its competitors when it comes to pricing. Like many of its rivals, it recently implemented a price hike. The increase was likely a result of licensing bidding heating up across the industry.
For more information about Hulu with Live TV’s plans, click here.

The base DVR has a decent capacity (50 hours) but there’s no fast forward button. To unlock the ability to zip past commercials, you have to buy the DVR upgrade. Purchasing it boosts the number of hours you can record to 200.
Click here to learn more about Hulu with Live TV’s DVR.

Sports-oriented streaming service fuboTV will become a lot more competitive after it adds ESPN and several other Disney-owned channels next month. Historically, the lack of ESPN was the streaming service’s biggest handicap against its rivals. Fox Sports New Orleans isn’t part of the main lineup, but you can access it by using your fuboTV credentials to unlock the Fox Sports Go app.

fuboTV has offered more pricing consistency than most other streaming services. However, a small hike has been announced to coincide with the addition of the aforementioned Disney deal. Even after that increase goes into effect, fuboTV will remain competitive relative to Hulu with Live TV, YouTube TV and AT&T TV NOW.
Learn more about fuboTV’s subscription plans here.
*Note that in order to see the Family, Entertainment, and Ultra plans, you need to first press "Start Free Trial." After you create an account, you'll see all of these plans.

One of the biggest edges that fuboTV has over the competition is that it’s specifically geared to appeal to sports fans. Roughly half the channels that are a part of the base plan are sports channels. 4K streaming adds an additional attraction. Some sports events are available in 4K via NBCSN and FS1. No other streaming service offers live 4K programming.
Strong support for wTVe (Watch TV Everywhere) is another big plus for fuboTV, especially for sports fans that live in New Orleans. You can stream Fox Sports New Orleans with a fuboTV subscription by logging in through the Fox Sports Go app.
You can see a full channel list here.

fuboTV has apps for Apple TV, Roku and all the other major devices that are popular with cord-cutters.
You can learn more about fuboTV’s supported devices here.

Most streaming services let their customers stream to three devices at once by default, but with fuboTV you get two streams to start. Since you have to pay an extra monthly fee to fuboTV to unlock a third stream, it’s lagging behind a bit in this category.
You can learn more about fuboTV simultaneous streams here.

You start out with 30 hours of recording time when you join, but a paid upgrade extends the limit to 500 hours. Some of fuboTV’s premium plans come with the DVR upgrade.
You can learn more about the fuboTV DVR here.

fuboTV doesn’t offer anything special when it comes to on-demand content. Like most other live TV-oriented services, the majority of the titles in the library are recently aired TV shows.

Another way to watch Fox Sports New Orleans is via Sling TV. Sling TV is somewhat limited when it comes to features and channels, but it’s one of the least expensive cable alternatives on the market.

There are two base plans: Sling Orange and Sling Blue. You can pick one or both and then use add-on packs to fill in the rest of the channel menu.
* You get 1 stream for Sling Orange channels and up to 3 simultaneous streams for Sling Blue channels.
To learn more about Sling TV pricing, check here.

You’ll need Sling Blue to access Fox Sports New Orleans, but you’ll have to use Fox Sports Go to tune in because it’s not available through the main Sling TV app.
To learn more about Sling TV channels, check here.

You can’t share your account simultaneously at all if Sling Orange channels are involved. However, you can watch Sling Blue channels on up to three devices at the same time.
To learn more about Sling TV’s simultaneous streams, click here.

Sling TV finally improved its DVR a few months ago. You now get 10 hours for free, which you can use to record almost every channel.
To learn more about Sling TV’s DVR, check here.

Sling TV’s on-demand library isn’t that notable, but it does contain more movies than what most live TV-oriented streaming services offer.

AT&T’s AT&T TV NOW has seen several dramatic improvements that make it far more competitive than it originally was at launch.

AT&T TV NOW has six main plans: *Note that AT&T TV Now offers several other plans that are hidden until you click to sign up.
For more information about AT&T TV NOW plans, clickhere.

As is the case with most streaming services, you have to log into Fox Sports Go to access the channel after you subscribe to AT&T TV NOW. The cheapest AT&T TV NOW plan is all you need to unlock Fox Sports Go.
Clickhere to see the full list of AT&T TV NOW channels.

This streaming service now offers a Hulu with Live TV-esque experience thanks to the recent addition of HBO Max to some of its plans. HBO Max offers a full array of exclusive original content, plus every HBO show and movie ever produced.
Click here to learn more about AT&T TV NOW’s on-demand library.

YouTube TV was once one of the cheapest cable alternatives around, but a series of hikes have pushed it toward the more expensive end of the price spectrum.
To learn more about YouTube TV’s pricing options, click here.

Sports is one of YouTube TV’s strengths. Along with Fox Sports New Orleans, you also get ESPNU, ESPN, ESPN2, ESPNEWS and all kinds of other sports networks.
To learn more about YouTube TV’s channel list, click here.

The unlimited cloud DVR is another unique feature of this streaming service. You can use it to record as much content as you desire.
Click here to learn more about YouTube TV’s DVR options.

You can watch Fox Sports New Orleans on Amazon Fire TV with one of these streaming services: Hulu with Live TV, fuboTV, Sling TV, AT&T TV NOW or YouTube TV. Simply go to the Amazon Fire TV app store and click whatever live TV service appeals to you the most– or try them all.

How to Watch Fox Sports New Orleans on Roku

You can watch Fox Sports New Orleans on Roku with one of these streaming services: Hulu with Live TV, fuboTV, Sling TV, AT&T TV NOW or YouTube TV. The process of installing a Roku app is the same as installing a smartphone app. Just look up the app you want to try and complete the sign-up process to get going.

How to Watch Fox Sports New Orleans on Apple TV

You can watch Fox Sports New Orleans on Apple TV with one of these streaming services: Hulu with Live TV, fuboTV, Sling TV, AT&T TV NOW or YouTube TV. Apple’s app store has them all, so try them out for yourself and compare.