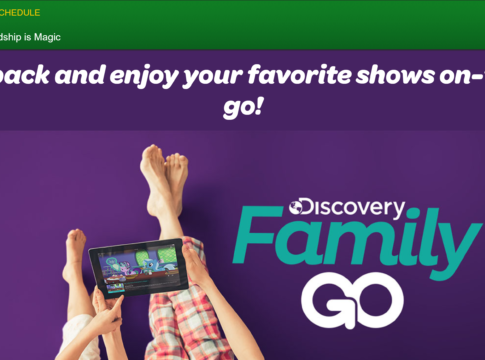 You can watch Discovery Family live without cable with any of these streaming services: Philo, Hulu with Live TV, fuboTV or AT&T TV NOW. Each streamer carries Discovery Family, but they all have their unique pros and cons. In this article, we’ll help you decide which streaming option is best for you. Let’s get started!

Philo is an excellent low-cost streaming service. Other streaming services have been raising their prices almost every quarter, but Philo seems to be committed to keeping its fees low. Sports channels are notably absent from the lineup. However, Philo does support Discovery Family and many other family-friendly cable channels.

Out of all the major streaming services, Philo is the only one that has never implemented a mandatory price hike. The base plan comes with 60 channels. The new Starz and Epix add-on packs provide additional entertainment value.

Discovery Family is notably part of Philo’s base plan. This is significant because most competing streaming services that carry this channel require you to purchase an upgrade to get it. Other popular channels that are a part of Philo’s core lineup include A&E, AMC, BET, Comedy Central, Food Network, Hallmark, HGTV, Nickelodeon and VH1. Lifestyle programming and reality TV shows seems to be its main theme. The fact that Philo doesn’t support any local channels or sports channels is one of its key disadvantages.

The makers of Amazon Fire TV recently integrated Hulu with Live TV right into its interface. Philo has apps for all the other most popular mobile platforms and streaming devices, as well.

Several of the most popular streaming services start you out with two simultaneous streams and make you pay an extra fee to unlock the third. But with Philo, you get three simultaneous streams by default. Unless you intend to give a large group of people your login credentials, three streams will likely provide more than enough flexibility for account sharing.

Philo’s impressive DVR is another major plus. You can use it to record as much content as you want. Since there are no fast forwarding limitations, you can zip past all the most annoying commercials.

According to Philo’s Help Center, “just about everything” that’s been aired on Philo over the past 72 hours can be viewed via the 72-hour Rewind feature. The on-demand library contains 50,000+ titles, most of which are TV show episodes.

Thanks to the fact that Hulu with Live TV subscribers gain full access to Hulu when they subscribe, this streamer has a distinct edge over most live TV-oriented streaming services when it comes to on-demand content. Discovery Family is available, but you have to order a channel expansion pack to get it.

Hulu with Live TV offers a significant bang for the buck. Even without the complimentary access to Hulu, its fees would still be competitive with other streaming services.

You have to buy the Entertainment Add-on channel expansion pack if you want to get Discovery Family. Other channels that come with that add-on include American Heroes Channel, CNBC World, Cooking Channel, Destination America, Discovery Life, DIY Network, FYI, LMN, and Science. The core channel pack comes with over 65 channels.

As is the case with pretty much every streaming service, the number of channels you’ll get will vary depending on where you’re located. Be sure to enter your zip code into the Hulu with Live TV website before you join because that’ll tell you which local channels you’ll get.

Hulu with Live TV offers a unique account sharing upgrade: Unlimited Screens. It gives you the ability to share your account with as many people as you want on your home network. No other streaming service offers anything like it. On the other hand, if you opt out of Unlimited Screens, you’ll be stuck with only two simultaneous streams. Three streams seems to be the industry standard now.

When it comes to DVR features, Hulu with Live TV is at a slight disadvantage. You can’t fast forward through your recordings unless you get the paid DVR upgrade. As the kid in the 1981 Connect Four commercial once remarked: “Pretty sneaky, sis.” The free version of the DVR can hold 50 hours of content. The upgrade boosts the limit to 200 hours.

As mentioned earlier, Hulu gives Hulu with Live TV a distinct competitive advantage over other live TV-oriented streamers. Not many of them bundle full-featured on-demand services with their live TV plans. You can watch Handmaid’s Tale, Harlots, Difficult People and many other critically acclaimed Hulu originals when you subscribe.

Sport is fuboTV‘s domain. The majority of the channels you get when you join are sports channels. However, there are quite a few family-friendly channels you can get through this service as well, including Discovery Family and several others. After ESPN finally debuts on fuboTV next month, a long-awaited cherry will be added to the top of this unique streaming service’s offerings.

Instead of making channels the focus of the pricing scheme, fuboTV’s designers have placed the emphasis on features. You get limited features if you get the cheapest plan. Premium plans come with various feature expansions. Some channel add-on packs are available as well. You’ll need to order the fubo Extra expansion if you want to get Discovery Family because it’s not part of the base plan.

There are no noticeable weaknesses here. Whichever streaming device you use, fuboTV almost certainly has an app for it. Apple TV, Roku, Amazon Fire TV, Chromecast and Android TV are a few of the major platforms that fuboTV supports. There are apps for iOS and Android as well, of course.

Two streams is the base account sharing limit. To upgrade to a third stream, you’ll need to either get one of the premium plans or order the standalone account sharing expansion. With more and more streaming services offering three-stream account sharing flexibility by default, fuboTV may need to upgrade its simultaneous streaming features soon to stay competitive here.

The maximum DVR capacity is 500 hours, but you start out with 30 hours. You’ll need to either purchase the DVR upgrade or order one of the premium plans that comes with it to boost the base recording limit.

fuboTV can’t compete with HBO Max, Hulu or Netflix here, but it does offer a small selection of movies and lots of recently broadcast TV show episodes.

AT&T’s AT&T TV NOW‘s high prices and limited features used to leave us scratching our heads. But now that the streamer has started bundling its new on-demand streaming service HBO Max with its live TV plans, it’s starting to remind us of Hulu with Live TV. New and improved features have also added to its competitiveness– and the fact that Discovery Family is available is a nice plus, as well.

AT&T TV NOW’s Plus plan is similar to Hulu with Live TV’s most popular subscription option. Both services combine live TV with a premium on-demand platform. However, AT&T TV NOW is significantly more expensive. The cheapest plan that comes with Discovery Family costs well over $100.

Xtra is the plan you’ll need if Discovery Family is on your “must have” channel list. The outrageous price is somewhat offset by the fact that it comes with several channels that most streaming services don’t carry.

You get three streams by default when you join. That’s enough account sharing flexibility for most people.

The 500-hour DVR is above average compared to other streaming services.

The on-demand library varies depending on the plan you get. You’ll get a ton of on-demand content if you get a plan that has HBO Max, but plans that don’t have less on-demand titles.

How to Watch Discovery Family on Amazon Fire TV

You can watch Discovery Family Amazon Fire TV with one of these streaming services: Hulu with Live TV, fuboTV, Sling TV, AT&T TV NOW or YouTube TV. Simply go to the Amazon Fire TV app store and click whatever live TV service appeals to you the most– or try them all.

How to Watch Discovery Family on Roku

You can watch Discovery Family on Roku with one of these streaming services: Hulu with Live TV, fuboTV, Sling TV, AT&T TV NOW or YouTube TV. The process of installing a Roku app is the same as installing a smartphone app. Just look up the app you want to try and complete the sign-up process to get going.

How to Watch Discovery Family on Apple TV

You can watch Discovery Family on Apple TV with one of these streaming services: Hulu with Live TV, fuboTV, Sling TV, AT&T TV NOW or YouTube TV. Apple’s app store has them all, so try them out for yourself and compare.