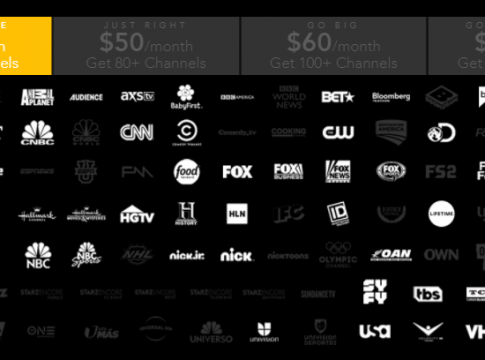 DirecTV Now lets you choose from four different plans and over 120 channels – but with so many options, it’s not easy to make sense of the menu. This guide is designed to help you understand DirecTV Now’s channel list and pick out the optimal plan that suits your needs. Continue on to:

What is DirecTV Now?

If you’re new to cable cutting, some of the jargon that DirecTV uses in its advertising might seem unclear.

DirecTV Now bills itself as “a streaming, or over-the-top service that offers 120+ live TV channels, premium programming options and access to more than 25,000 on-demand shows and movies.”

DirecTV Now provides TV programming by streaming it on top of your home internet connection rather than through a separate cable or satellite connection. Inside the industry this format is called over-the-top (OTT). In other words: there are no policies or rules preventing you from buying a subscription to DirecTV Now. Some internet TV services require you to subscribe to a traditional cable plan before you can join, but DirecTV Now does not.

“Premium programming” is just a fancy way of saying “cable TV.” DirecTV lets you access ESPN, STARZ and other cable channels via the web instead of through satellite or cable TV providers.

With DirecTV, you can get both Netflix-style “on-demand” service and live TV channels. On-demand videos can be played at any time, but live video streams are like live TV programs – you have to be in front of the TV at the right time to catch the action.

There are four different DirecTV Now plans: Live a Little, Just Right, Go Big and Gotta Have It. All the plans are easy to understand and when you upgrade, you get more of just about everything each step of the way.

In terms of local TV coverage, DirecTV has made a lot of deals with local affiliates – but the company still working out contracts. You may not get many local TV channels unless you live near a major metropolitan area.

When DirecTV Now first came out, you couldn’t get CBS on DirecTV Now. However, now you can – but only if you live near a CBS affiliate that has sealed the deal.

If all you want is access to ESPN and other basic cable channels, Live a Little is a pretty good deal.

With Live a Little, you get all the major sports and news networks that you get with traditional cable and plenty of family friendly channels, too.

Live a Little has:

If you like sports, you may stand to benefit by upgrading to the $50-per-month Just Right plan. Unlike Live a Little, Just Right offers access to regional sports channels plus the MLB Network, a few more ESPN channels and some extra college sports channels as well. You also get Comedy.TV, The Cooking Channel and a few other assorted variety channels.

The Just Right channel list has everything in Live a Little (with the exception of Hallmark Movies & Mysteries), plus:

With Go Big you get all the channels the Just Right plan has, plus:

*Centric and LMN recently rebranded. Their new names are BET Her and Lifetime Movies

Gotta Have It ($70) seems to have been designed with movie fans in mind. With DirecTV Now’s premium plan, you get all eight Starz and Starz Encore channels as well as Chiller, the El Rey Network, and Boomerang.

In other words, Gotta Have It has all the Go Big channels and:

Do some of the networks on our DirecTV Now’s channel list have you scratching your head? If so, you’re not alone. Here are descriptions of the lesser known channels that appear on the DirecTV Now menu.

FX’s “sister channel” airs comedy and drama reruns and made headlines in 2014 for playing all 550+ Simpsons episodes back-to-back.

HLN’s former (and far more descriptive) name was Headline News. The point of the recent rebrand effort was to refocus the news service on domestic stories and “news that hits home.”

Freeform’s target demographic is young women between the ages of 14 and 34 – an age group that Freeform’s president Tom Ascheim calls “becomers.”

“The most important question that young people ask themselves as they’re going from high school to their thirties is, ‘Who am I becoming?’ So we call the life stage ‘becoming’ and the people going through it Becomers,” – Tom Ascheim, president of Freeform

The network’s two most popular shows at the moment are Pretty Little Liars and Shadowhunters.

Though the DirecTV Now still lists Centric as a channel that comes with Go Big, the channel recently changed its name to BET Her. Like the new name suggests, BET Her is a lifestyle channel that caters to African-American women.

If you guessed that the Chiller channel was about chilling out and relaxing, you’re not only incorrect – you’re dead wrong. Chiller specializes in horror movies and its tagline is “It’s scary good.”

When Logo first came out back in 2005, its target demographic was the LGBT community. However, in 2012 Logo shifted gears. Citing research indicating that most gays and lesbians do not prefer living and socializing in exclusively gay and lesbian communities, Logo decided to shift away from shows featuring LGBT leads and themes.

The Revolt network is the brainchild of the rapper formerly known as Sean “Diddy” Combs. Originally, Revolt was designed to be a music channel “by artists, for artists.”  However, low ratings made it hard for the network to gain ground. Vice’s music blog Noisey recently described Revolt as “once good but now forgotten” – but Revolt is still carrying on, regardless.

Like Centric, LMN is another DirecTV Now offering that technically no longer exists. LMN is now known as Lifetime Movies. Like its newer and more descriptive name suggests, LMN specializes in female-oriented made-for-TV movies.

The fyi channel calls itself a “contemporary lifestyle network.”  In other words: it’s a reality TV show factory. When it first came out in 1999, fyi was known as The Biography Channel.

DirecTV Now is a new cable replacement service from DirecTV that allows you to get your cable TV fix via the internet. Four different plans are available: Live a Little ($35), Just Right ($50), Go Big ($60) and Gotta Have It ($70).

If you’re into college sports…

If you’re a NCAA sports fan, Just Right could be all you need. With Just Right, you can get ESPN 1 and 2, ESPNU, the SEC and Big 10 networks. Plus, you have a good chance of getting local TV feeds if you live close to a major city. That’s not a bad deal for $50, especially if you follow an SEC or Big 10 team.

If you’re a movie buff…

The 8 STARZ movie channels that come with Gotta Have It are designed to lure in people who like box office smash hits (STARZ) and horror movies (El Rey, Chiller). However, it only makes sense to invest in Gotta Have It if you’re a true movie geek. If you’re the type of person that only watches movies every once in a while, it may make more sense to rent a movie from Google Play or Amazon Video whenever you’re in the mood to see a flick.

If you get most of your entertainment over the airwaves…

If your TV antenna takes care of most of your television viewing but your local channels bore you occasionally, the Live a Little plan lets you add some spice to your TV lineup. The Live a Little channel lineup isn’t huge but it’s diverse and has a little something for everyone. In addition to having a nice selection of family oriented channels, Live a Little also has a robust mix of variety TV networks.