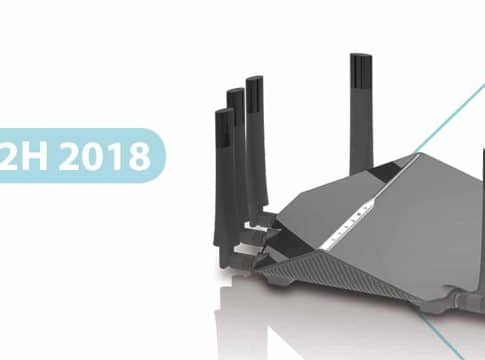 Announcements at today’s CES kickoff provided a first look at how 802.11ax can solve the many Wi-Fi issues that plague modern households.

More and more devices are competing for Wi-Fi bandwidth in homes. On top of that, streaming video is placing a heavier load on routers. Products based on the new 802.11ax standard promise to solve connectivity issues in 2018.

802.11ax combines traditional Wi-Fi technology with techniques from the cellular industry. The new standard lets routers better support the growing number of wireless devices in modern households. In addition, 802.11ax will deliver speeds as high as 10 gigabits per second.

The Wi-Fi Alliance’s predictions for 2018 suggest that a growing number of chipsets and products will support the new wireless technology. The shift already seems to be underway, as today several companies announced new 802.11ax chipsets.

Several wireless router manufacturers announced new 802.11ax compatible products. D-Link shared news of its new AX6000 and AX11000 Ultra Wi-Fi routers, which it claims can achieve speeds as high as 6Gbps and 11Gbps. Asus debuted its own 802.11ax router last year in Europe and is showcasing it again at CES. Asus says its RT-AX88U is 6 Gbps capable.

It will likely take time for 802.11ax to reach the mainstream. Higher-end laptops and smartphones probably won’t have the new technology until the holiday season. These announcements, however, provided a glimpse of what the future holds.