Looking for the cheapest internet providers (ISPs) in California? Of course, you are. The cord-cutting phenomenon is not just about nixing cable. Most cord-cutters are also looking to reduce their internet bills as well.

Unfortunately, it can be difficult to effectively reduce your cable bill, especially given around 50% households in the country only have 1 provider for fixed high-speed internet access (25 Mbps down), and around 20% of the country can’t get 100 Mbps download speeds at all.

California is a bit better on this end, especially as there are dozens of ISPs serving Californians. Many of the ISPs you’ll find are small and local, only available in select cities. To that end, our focus is two-fold:

There are also some notable limitations here. Outside of the fact that not every ISP will have coverage in every city in California, you may not be able to get the highest speed available from that service. Prices may also vary for your service in different parts of the state, even from the same provider.

Long story short: If you live in California and have access to Verizon, sign up as fast as you can. Verizon is the clear winner for the price compared to minimum speed available. The service also has the cheapest promotional price you’ll find for the speed, and a price that rises the least after the promotional pricing ends.

Let’s take a more detailed look into how internet options vary in California.

California has an exceptionally large number of ISPs. Alongside some of the biggest names in the business (AT&T, Verizon, Comcast, Spectrum), many residents in California can choose from smaller, regional ISPs.

However, from our research, if you can get access to one of the major ISPs available in the state, you will probably want to stick with those options. By and large, small and local ISPs provide comparatively low speeds for the price you’re paying, making them a bad deal.

Statewide, the biggest ISPs in California (those with the widest coverage across the state), are:

Here is how those services compare:

As you can see from the chart, Verizon isn’t the “cheapest” in regard to final price, but it is the cheapest if you’re looking for an internet plan with decent speeds. That said, if speed is not a concern for you, and you have access to Frontier (an authorized Verizon dealer), it’s a solid option with a very low-cost plan and no monthly data caps.

What you will find with Verizon and many of the other large ISPs is that the price you see online for almost any plan available is a “promotional price”. That means you’ll only pay the advertised price from anywhere for a few months to a year.

In the case of Verizon, their “Better Browsing” 100 Mbps option actually comes with a 1-year promotional price of $39.99. And since the company only requires you to sign up for a 1-year subscription with the plan, you might be able to sneak by only paying about $40 per month.

A good middle-of-the-road option, if it’s available to you, would be either the Cable One 15 Mbps for $45 plan or the Comcast (Xfinity) 15 Mbps for $49.99 plan. Between the two, Comcast’s offer is noticeably better as it does not limit you to just 50GB-per-month of data usage.

Here are how all of these options look visualized:

A city of 4 million people has to have great internet options available right? Well, sort of.

Although Verizon is the best option in California, Verizon’s service availability in Los Angeles is pretty much non-existent. Instead, your best option is going to be AT&T’s 50 Mbps plan for $60 per month (promo rate of $50).

If you want a little more speed, Spectrum’s 100 Mbps service plan comes in at $64.99 per month. And unlike AT&T’s option, which has a 1 Terabyte monthly data cap, Spectrum’s plan includes no data cap at all.

Some options available in Los Angeles are extremely bad options for what you’re paying. Take Etheric Networks, for example. This fixed wireless option is crazy expensive with horrendously slow download speeds. In addition, fact that it even includes a data cap at all makes it a very bad option altogether.

HughesNet and Viasat/Exede are also poor options if you plan to do much internet usage. Both satellite-based services have prices that are equivalent to some of the fixed cable and DSL options but have very low data limits.

Side note: As someone who lives in the country, I know people who use satellite options such as HughesNet and Viasat. They are, by and large, decent internet options until you hit the data caps. In some cases, they impose daily data caps as well but may have hours (usually very late at night) where you can stream without adding to your data caps.

Meanwhile, If you can stomach a rather slow connection, Frontier presents a decent option in Los Angeles. Frontier purchased Verizon’s FiOS network not too long ago, so its FiOS service is its own, and not a reselling of Verizon’s landlines.

Here are what your options in Los Angeles look like visualized:

San Francisco is an interesting case as well. The city well-known for the Golden Gate Bridge has a few consumer ISP options available.

If you’re in San Francisco you may be able to choose a somewhat smaller, yet growing ISP known as Sonic.

Not to be confused with the burger joint, Sonic is an ISP that has actually adopted an open internet philosophy. The company is dedicated to Net Neutrality, so they do not throttle speeds or provide preferential speeds for affiliates sites and services. They even offer up to gigabit service for a reasonable price.

You will also note that Sonic and AT&T have the same price and the same download speed: $60 per month and 50 Mbps down. The key difference between the two services is the data limit. AT&T maintains their data limit across the country for their 50 Mbps option, and this includes San Francisco.

Sonic, however, has no data limit – either that they’ve advertised, or hidden away in any policies that we can find. In fact, Sonic’s blog includes a reshare of an article quoting its CEO criticizing ISPs for having data limits.

If you really need a cheap internet option in San Francisco, the best you will find is a 10 Mbps plan from Wave for $42.95. That also comes with a rather paltry 100 GB monthly data cap. San Francisco, from our research, is actually the most expensive city to purchase internet in of the biggest 3 cities in California.

Also, we’re not sure who is purchasing Raw Broadband Communications’ lowest-speed option, but at $43.95 for less than 1 Mbps down, it’s not really a great option for anyone.

Here are how your options in San Francisco look graphed:

Beautiful San Diego has a noticeably smaller population than Los Angeles and San Francisco, and unsurprisingly, has fewer ISP options available to consumers.

On a positive note, San Diego offers 3 of the biggest internet service providers in the country. Verizon and Comcast may be absent for most San Diegans, but AT&T, Spectrum, and Cox are still on offer.

As for the best, cheap plan available in San Diego, you’ll need to decide whether you want more speed with no data limits, or lower speed, a slightly lower price, and a monthly data cap. If the latter is more appealing to you, you can save $5 per month and go with AT&T’s 50 Mbps down option for $60 per month.

Spectrum’s asking price over AT&T’s lowest-cost service plan isn’t exceptionally high, however. That $5 difference includes twice the speed and no data limits so it may be the better option if you’re a heavy data user, or you have a house full of people sharing a data connection.

None of the options available in San Diego are necessarily bad, either. They’re just not preferable. You’re either going to pay a lot in San Diego, or you’re going to be very limited in terms of speed and data caps.

That said, if you absolutely need as low a price as possible for internet in the city, HughesNet’s $49.99 plan with 25 Mbps down and 10GB per month data limit might be workable. Then again, if data limits are untenable for your, Viasat/Exede offers no data limits in San Diego, which is not true in many other cities.

Here is what your San Diego ISP comparison looks like: 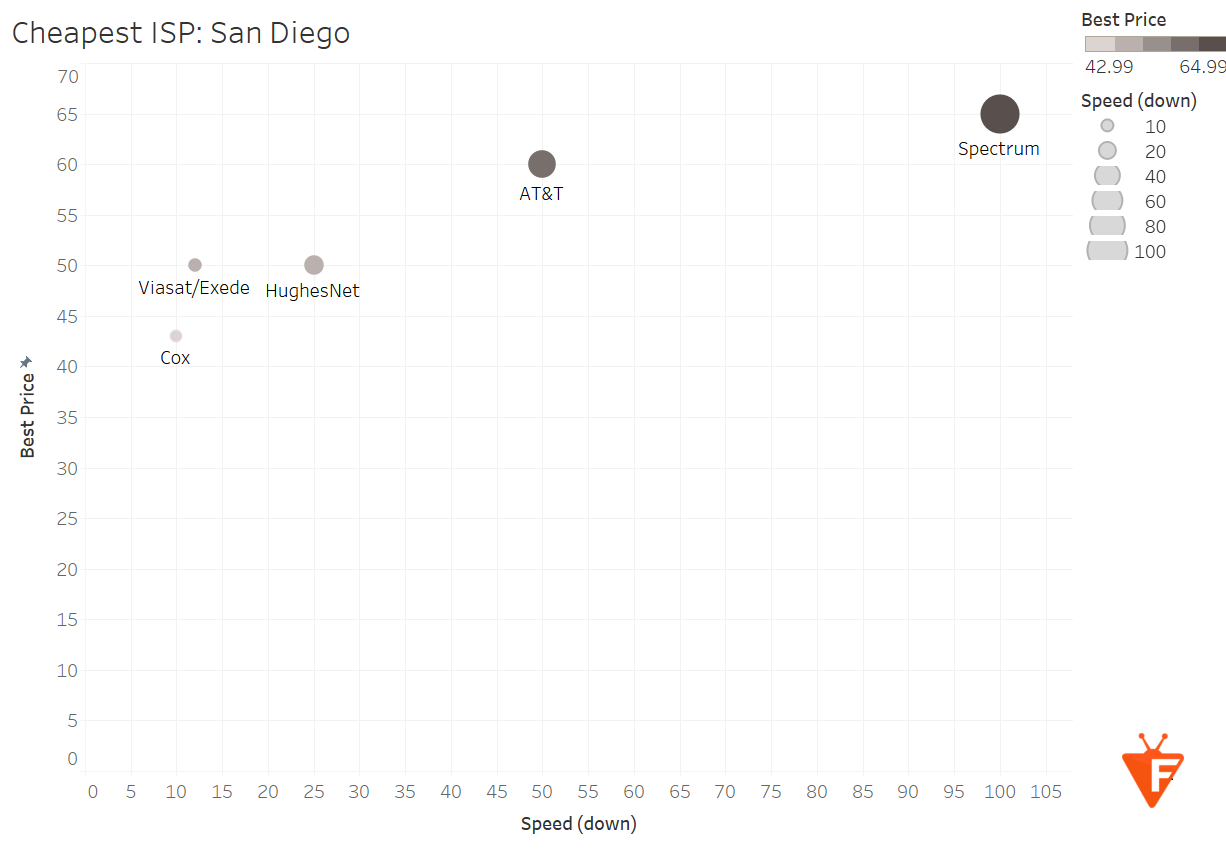 How to Shop for Cheap Internet

When looking for internet, the price isn’t everything. You may find some very low-cost options out there, but there’s a good chance you’ll find yourself quickly frustrated by slow internet speeds and very low data caps.

The best thing to do is consider all of the following:

How much data do you use per month?

Before you change your ISP for a cheaper option, measure how much data you’re using in a normal month. This can impact whether you decide to go with a service that has data caps in place or not.

Most ISPs provide you with information regarding how much data you’re using. Your current ISP likely has that information available on your user account. Otherwise, you can contact customer service and inquire about your average data usage per month.

Use that information to determine if a low-cost option with data caps is right for you.

What much speed/bandwidth do you need?

How much speed/bandwidth you need is a separate issue from your overall data usage. If you find yourself streaming 4K video all of the time, certain internet speeds just won’t cut it.

According to Netflix, the following internet speeds are recommended for different video streaming qualities:

If you want Ultra HD videos, you’re going to need at least 25 Mbps down. And remember, that’s just for streaming from just a single device.

If you have a family or have multiple devices using data, 25 Mbps probably isn’t going to cut it. You’ll need much more than that to accommodate for all of the devices connected to your home network.

What price per month can you afford?

Ultimately, how much you can afford should be the most determining factor here. If you simply can’t afford the $60 per month that AT&T charges for its 50 Mbps service plan, don’t stretch your wallet beyond what you can reasonably afford. If you’re seeking out cheap internet out of necessity, you will likely have to make some sacrifices to how you use your internet on a regular basis.

All data was acquired through BroadbandNow and Cabletv.com.