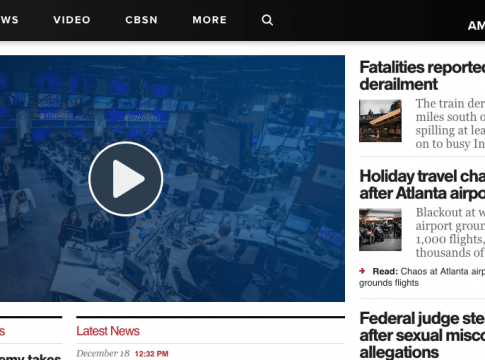 CBSN seems to be shedding its image as a news network for aging baby boomers. According to an end-of-year recap, almost 80% of CBSN’s viewers are either Millennials or Generation X.

Related: How to Watch CBS Online, Without Cable

CBS came late to the 24-hour news cycle when it launched in 2014. Fox News and MSNBC both launched in 1996, sixteen years after CNN pioneered the format. CBS executives chose not to fight for placement on crowded cable channel lineup and went straight into streaming instead.

Over the past three years, CBSN has developed its own slate of programming that complements the company’s traditional broadcast news shows. According to CBS, 68% of viewers believe CBSN offers a product that other news channels do not – and 46% think CBSN does a better job at the news.

Variety interviewed CBS News Digital general manager Christy Tanner to talk about her vision for the company. Tanner explained that CBSN’s customers want a news service that “is more focused on knowledge than opinion, and delivers new information to them on topics they have not seen covered elsewhere.”

Part of CBSN’s popularity is due its multi-platform approach. A fifth of viewers get their news from CBSN’s mobile apps. A full half of viewers use over-the-top apps to stream news on their home networks. CBSN’s app lineup includes:

CBSN’s approach produced 17% growth in viewership between 2016 and 2017. If the trend continues, 2018 will see the network’s modern approach to news expand even further.