Digital over-the-air broadcasting is changing how we view television. Everything that was once possible with a digital cable signal is now possible through OTA broadcasting. That includes channel guides and increasingly popular digital video recording. While cable networks do still have an advantage over the number of channels offered, that is also changing rapidly. So are the number of people paying for cable.

In 2013, the Consumer Electronics Association discovered that cable subscriptions fell 5 percent.  A survey by market research group GfK discovered that 1/5th of U.S. households use only OTA TV. Even Nielsen, which maintains that the number of people using OTA TVs is under 10%, found that those numbers were growing. Considering that the only necessary expense for digital OTA TV is the initial cost of the receiving antennae, many cordcutters will likely find value as more channels are broadcast through DTV signals. Cordcutters are finding that even the cheapest cable packages cost over $20 a month for fewer than 20 channels. Alternatively, DTV can easily cost as little as $10 as a one-time cost, while offering over 30 channels.

For more than half a century after the invention of the first television, there was only one way to get TV programs in the home: analog signals. Unfortunately, analog reception is notoriously poor and often negatively influenced by a large number of factors, including weather. Cable television, which came along in the late 1940s, helped change that. Over the course of 6 decades, cable television has become the medium of choice for most people. Growing discontent among young viewers is causing a dramatic shift in where people are viewing television. As digital OTA experiences a return to form, many viewers are adopting it as a preferred option.

By 2015, 83% of Americans were paying for cable television. Analog TV, however, started to disappear in the 1990s, replaced slowly, but surely, but digital over-the-air television. Digital OTA broadcasting utilizes a strong, compressed digital signal that is unaffected by anything other than distance and signal strength. The picture comes in stunningly clear. While cable long held an advantage over quality, that changed with the invention of DTV and now high definition digital television.

Many companies, now recognizing the value in over-the-air television and in people’s desire to not have to pay for television, are utilizing the benefits of digital television signals. Increasingly, this is leading situations where viewers can get sometimes more than 50 channels from over-the-air digital broadcasting, often achieving better value than with cable television.

It’s surprisingly easy to find a multitude of over-the-air digital broadcasting. Using a simple search tool from Tablo TV, anyone can find HDTV OTA broadcasts in their area. The only equipment required is an HDTV OTA antenna. For those that want the benefit of streaming that content anywhere in the house, digital OTA broadcasting DVRs now exist that can easily relay that digital content anywhere in the house.

Here are a few examples of channels available in three of the biggest cities in the U.S:

The number of stations is slated to grow in the coming years as well. On their company blog, start-up ISP Ting notes that over 130 digital OTA channels have been added in recent years. When combined with streaming box devices such as Roku, and PVR services like Plex and Tablo OTA DVR, cordcutters can not only receive most of the same content available on cable services, but can in many cases access more than what is normally available the more commonly used cable packages. For those hoping to spend as little as possible, the minimum cost can be as little $10 for a some of the cheapest HDTV antennas. Meanwhile, other companies like Mohu are making waves in the industry with new technologies to service the industry.

In comparison to an average of 50 or more channels for as little as $10, cable subscriptions will typically cost hundreds of dollars a month. Here’s a look at two of the largest cable companies: Comcast and Time Warner.

As you can see from the image below, for Seattle, Comcast offers 6 different digital cable TV packages, ranging from 10+ channels to one with over 260 channels.

We found there is very little difference in channel lineup between many of the packages. This was particularly true between the Digital Premier package and the Digital Preferred package. Despite the huge cost differences, Comcast offers very little value in changing packages. Even the cheapest package here costs far more than a digital OTA TV antenna while offering fewer channels.

We found the packages and prices to be the same as Seattle. The only difference was in the price of the cheapest plan, Limited Basic. In San Francisco, this package costs $29.15.

As you can see from the image below, Time Warner Cable offers three digital cable tv packages, ranging from 20+ channels to more than 200 channels. 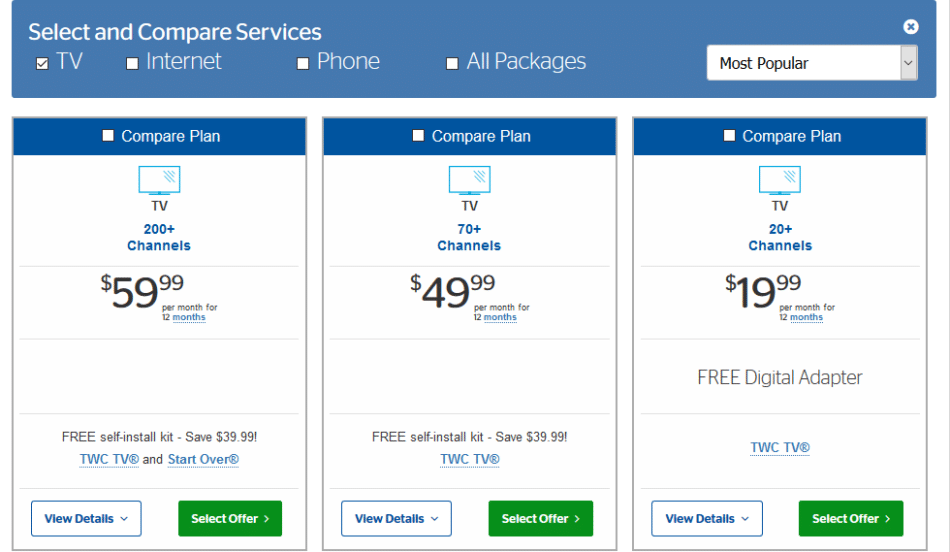 Here’s the breakdown in price for these packages:

Time Warner Cable offers fewer packages than Comcast, but they are unequivocally less expensive and seemingly more worthwhile between packages. Even still, the lowest cost package is far more than what one might pay for a digital OTA antenna, while offering fewer channels. The difference between Time Warner Cable’s packages and Comcast’s packages are the lack of movie channels included in Time Warner’s options. These must be purchased separately. The desirable channels in the cheapest package that are not available over-the-air can be mostly obtained through a service like Plex, for far less.

Although it’s one of the biggest cable providers in New York City, Time Warner Cable offers one fewer package than what’s available in Seattle. The packages two smallest packages, 20+ and 70+ channels, are offered and at the same price.

Time Warner Cable is currently not available in San Francisco.

Despite the growth in digital OTA broadcasting channels, free, over-the-air digital broadcasting has an uncertain future — at least, in the United States, that is. The U.S. Federal Communications Commission has been planning to auction off the wireless spectrum used to send digital broadcast signals. One such auction takes place on September 13th.

The FCC’s plan for several years now has been to auction off to cell phone companies what it calls “underutilized” spectrum. When digital spectrum became available decades ago, the FCC gave the frequencies away freely. Now, they’re holding what is known as a “reverse auction”. Those companies that currently hold, but either do not use or underuse that spectrum will have the opportunity to auction them off to the highest bidder.

The biggest losers in all of this will be not only customers, but LPTV, or low power television networks. Many of these small and rural community OTA broadcasters will disappear after the auction. Why? Because the FCC decided that they will not be allowed to participate in the auction. Indeed, just as digital OTA is beginning to see a second life, it could quickly come to an end in the U.S. The FCC’s current claim is that the auction will “preserve a robust broadcast TV industry”. Yet the reality is that this action will serve to stem the growth of high-definition digital broadcasting, instead transferring much of the available spectrum over to wireless carriers.

Nevertheless, many cordcutters continue to find what they’re looking for in digital over-the-air broadcasting. And with new technology servicing this industry hitting the market each year, it’s unlikely that digital OTA TV will go away anytime soon.