Interested in finding the best streaming services for watching anime? You’ve come to the right place.

In this article, we’ll look at five streaming services that we believe are the best options for streaming anime. Before diving in, we need to explain what makes anime streaming different from normal content. This will be old news to long-time anime fans, so feel free to skip forward to the reviews.

Although the anime style appears in animation worldwide, anime is inherently Japanese. The rest of the world experiences anime in translation. Purists want to hear the original Japanese voice actors and read subtitles, while others prefer to hear voice actors speaking english (or French, Spanish, or a myriad of other languages) in dubbed versions.

Subbers say this undermines the original work – especially when the dub actors’ performances are bad. On the other hand, dubbers argue that subtitles require too much attention and detract from their enjoyment.

Translation drove the anime industry’s development. Although Japanese producers created their work for the Japanese market, anime has succeeded in becoming a truly global phenomenon.

Fans, frustrated by the trickle of translated content, shared their own translations of favorite titles on “fan-subbed” tapes and DVD’s. The  anime industry saw the promise – and the threat – of online video as shared fan-subs ate into their sales.

Today’s streaming services make subbed and dubbed formats available to their customers, although we will see that each company’s approach is a little different.

With dozens of different anime series’ being broadcast in Japan at any given moment, hardcore fans want to see new episodes the moment they air. The Netflix dump-and-binge approach does not work for anime fans. They want to see those episodes now.

Anime-specific streaming services make subtitled first-run episodes available as little as an hour after the episodes run in Japan – these are referred to as simulcasts.

Please note that the word simulcast may not always mean that you can stream the episode as it airs in Japan. The delay may be up to a few hours.

App support could be a differentiator – if someone ever gets it right. As we’ll see, there is something universal about how awful people think the apps for these streaming services are.

Crunchyroll is the largest anime streaming service, boasting more than 800 titles in its catalog. It makes its content available worldwide with versions available in in English, Spanish, Portuguese, French, German, Arabic, and Italian.

A group of University of California Berkeley graduates founded Crunchyroll in 2004 as a streaming site for fan-subbed content. Given the unlicensed nature of the content, Crunchyroll wasn’t a completely legitimate operation at the time. However over the following several years, Crunchyroll began acquiring legal licenses to distribute these same anime series’. 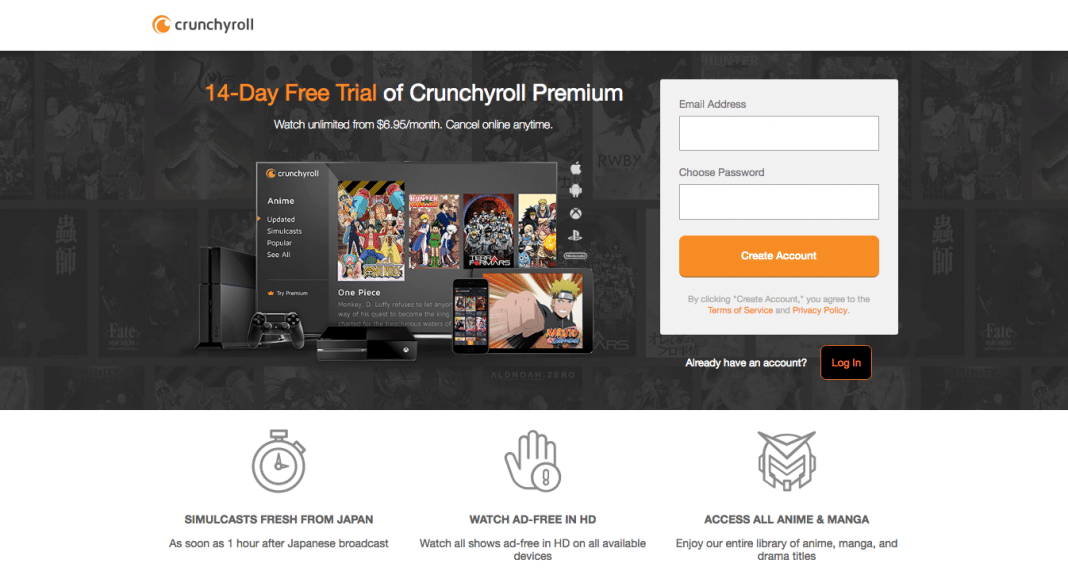 Crunchyroll offers three membership tiers. At the Free level you can watch the first few episodes of most series (with advertising) at 480p standard definition.

Premium members pay a monthly subscription of $7 for access to Crunchyroll’s entire library in either 1080p or 720p high definition without advertising. They can also watch simulcasts of episodes as little as an hour after the programs run in Japan. Premium members also get discounts on manga, videos, and merchandise at the Crunchyroll store.

Premium+ members pay $12 a month for even more benefits like free shipping on purchases, VIP perqs at Crunchyroll events, and access to beta features.

Crunchyroll focuses on subtitled content. That lets it serve global audiences with translations in many languages. At the same time, it alienates fans who prefer the convenience of dubbed programming.

Crunchyroll shares catalogs and simulcasts with competitor Funimation, the former hosting subtitled content and the latter hosting dubbed versions. Even if you prefer dubbed anime, you may want to try Crunchyroll’s free trial to explore the breadth of its content. 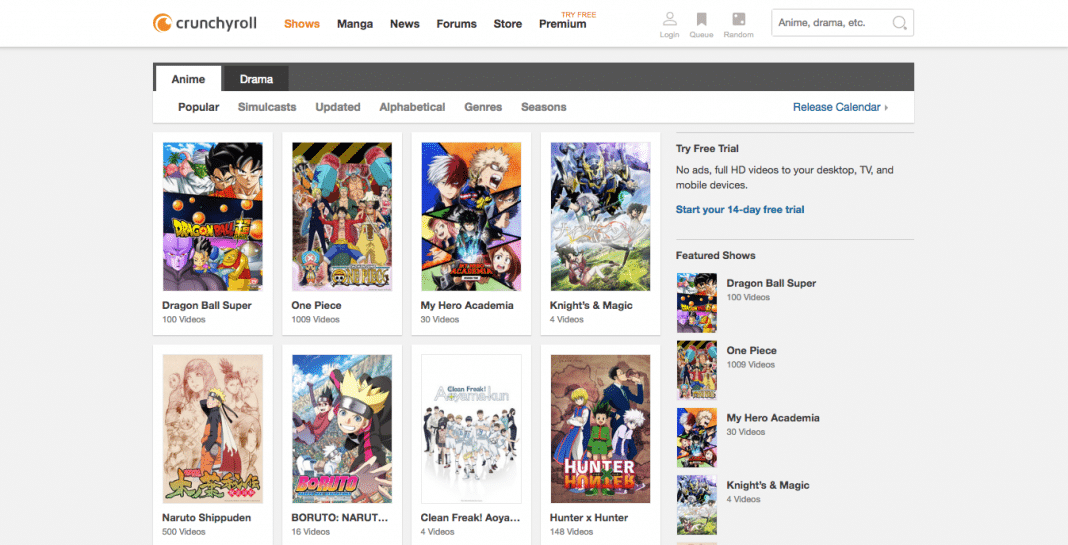 Crunchyroll’s catalog of more than 800 shows and 25,000 episodes yields about 15,000 hours of anime ready to stream. There are no movies in the catalog, but you can see award-winning series like Cowboy Bebop and Fullmetal Alchemist: Brotherhood as well as simulcasts of current run series like A Centaur’s Life and My Hero Academia.

The website lets you filter by popularity, simulcasts, recently updated, genre, and seasons – or browse an alphabetical listing. The search bar auto-populates results as you type – and recommends merchandise you can buy. Arriving at the series page, you see a list of all available episodes. The page also consolidates reviews and member comments.

Crunchyroll apps are available for iOS, Apple TV, Android, Chromecast, PlayStation 3 and 4 and Vita, Xbox One and 360, Wii U, Roku, and Windows Phone. Reviews of the apps are pretty critical of Crunchyroll’s execution. Premium members report that they still have to view advertising – as many as half a dozen at a time.

Funimation is the second-largest anime-centric service with more than 400 titles. Funimation serves the dubbing side of the anime fanbase. That limits its availability to English-speaking countries.

Japanese immigrant Gen Fukunaga founded Funimation in 1994 to import Japanese pop culture to the United States. The company’s earned success when it licensed the Dragon Ball franchise to the Cartoon Network.

Even though Funimation is one of the oldest players in this review, it is the newest streaming service. It launched early last year in the United States and the United Kingdom before expanding rapidly to Ireland, Canada, Australia, and New Zealand.

Funimation offers two membership levels. Registered users can watch a limited number of free videos in high definition (except in Australia and New Zealand). The videos include advertising.

Premium members pay $6 a month or $60 for an annual plan. That gives full, ad-free access to the catalog as well as dubbed simulcasts. Subscribers also get to watch two simultaneous streams.

Funimation leads with content dubbed in English (hence its distribution to English-speaking countries). The company does a lot of that work in-house and conducts annual open auditions for voice actors.

The video player lets you switch between the dubbed and the original Japanese soundtracks. When available, it also lets you toggle English subtitles on and off.

You have many options for finding content on the Funimation site, beginning with What’s New’s lists of new releases and schedule of simulcasts. The Discover menu also produces curated lists from Funimation staff and community-generated recommendations. The Shows menu lets you see all titles, break it down by genre or simulcast, and see what’s popular with Funimation members.

Funimation claims availability in half a dozen countries, but that is only true for the website. The countries served varies from app to app. The Apple TV and Xbox 360 apps, for example, work in four countries with Australia and New Zealand “coming soon”. The Xbox One app, on the other hand, only works in the US and Canada.

Users gave the mobile app low ratings for Funimation’s sloppy execution. Several reviews say that the app randomly switches between subtitles and dubbing in the middle of a video.

Hulu does not need much of an introduction for American cord-cutters – its only available within the United States and on US military bases. The mainstream service differentiates itself from Netflix and Amazon Video by providing ad-supported streams of current-run TV shows.

Over the years Hulu developed a strong following among anime fans for its deep catalog of anime titles. Although not as true anymore, it is still remarkably anime-friendly for a mainstream service.

Hulu offers two subscription levels. The $8 per month plan gives access to the Hulu catalog with “limited or no commercials”. A $40 per month plan adds live TV in an attempt to make Hulu a solution for cord-cutters.

During the thirty-day free trial, you have full access but you must watch three 70-90 second ad blocks during a twenty-minute program.

Counting Hulu’s catalog is not easy since its algorithm presents auto-generated collections rather than a straight list. Something to Stream lists almost 600 anime titles on Hulu, but it was once larger. Engadget reported that Hulu culled its anime catalog. Many back-catalog and slow-performing titles disappeared. However, you can still find popular titles like Attack on Titan or Naruto as well as simulcast programs like My Hero Academia.

Hulu’s app support is the most comprehensive of the services in this review. That doesn’t stop complaints. App store reviews are very critical of its new design and the ability to discover content.

Viewster‘s 60-title catalog is the smallest, but it is free and available worldwide. Inc magazine ranked the startup as the 10th fastest-growing European company in 2016. Its ability to distribute content worldwide drove much of that growth.

In response to the Inc ranking Viewster’s CEO explained that “mobile video advertising has been our main growth driver….” That advertising covers the company’s licensing costs and lets anime fans enjoy free, legal, access to anime.

Viewster’s catalog is a bit hit-or-miss. Some titles are only available dubbed into English while others are subtitled in multiple languages.

Viewster’s anime-centric marketing is misleading. Anime gets top placement on the home page and is the only genre mentioned in web copy. Yet Viewster’s 5,000-title catalog only contains 62 anime titles.

It’s a good thing the list is so short. The only option Viewster gives you is to filter the list by TV Show or Movie. Since it only has five films, you have to do a lot of scrolling to find shows. The catalog includes franchises like Ghost in the Shell and Gunslinger Girl, but does not support simulcasts.

Viewster supports streaming on its website, mobile, and several smart devices. The apps get favorable reviews. Most complaints focus on the limited anime selection.

No single service is a clear winner. It all comes down to your personal preference. Do you prefer exploring a deep catalog? Then Crunchyroll or Funimation would be your best bet. On the other hand, that one show you’ve been dying to see may only be available on Daisuki. Fans are the clear winners as they get more options for streaming anime.