If you’re a Netflix subscriber and you want to watch American Netflix on Apple TV while traveling or living abroad, you’re in for a nasty shock — you will only be able to watch the local catalog of Netflix titles in the country that you’re visiting. And, in some cases, Netflix may be blocked altogether.

In this guide, we’ll give you step-by-step instructions for how to watch American Netflix on your Apple TV. You’ll be able to learn the basics about VPNs and how to share your internet connection with your Apple TV. Let’s get started.

First things first. To access American Netflix while you’re traveling outside of the United States, you’ll need a VPN or Virtual Private Network. A VPN is a useful tool because it makes Netflix think you’re connecting from the United States when in reality, you could be anywhere in the world.

VPNs are pretty simple to understand. When you connect to a VPN, all of your web traffic is encrypted by the service and sent through a “tunnel” to a server owned by the VPN company. Then, your web traffic is sent from this server to the original destination — such as Netflix.com.

Because the VPN server is physically located in a different country, it has an IP address in that country. This means that, for all intents and purposes, it looks as if you are simply on a computer in that country, and accessing the internet normally.

This is why a VPN is the best way to unblock American Netflix. When you use a VPN to connect to Netflix from an American server, it looks like you’re using a real American internet connection, so you won’t be blocked.

Our recommended VPN is ExpressVPN. ExpressVPN is the best way to watch American Netflix on Apple TV as it encrypts your traffic with top-grade encryption, and always has American servers that unblock Netflix. It’s also affordable and quite easy to set up on the Apple TV. Let’s go over your top options now.

Unfortunately, there are no VPN apps that are available with native compatibility with the Apple TV. This means you can’t use a VPN directly on your Apple TV.

However, it’s still possible to use a VPN with the Apple TV. You just need to use a router, virtual router, or a shared network connection with a device that is using the VPN and encrypting your traffic.

Here’s what you need to know.

Method 1: Using a router-based VPN or a virtual router

One way that you can get American Netflix on a VPN is by using a router-based VPN. When you use a VPN on your router, all of your network traffic is encrypted and sent to the VPN by default. You don’t need to run any other apps on your phone, computer, or Apple TV.

This makes a router-based VPN a great idea if you want to use your VPN service on many different devices at once.

ExpressVPN has quite a few different routers that offer native compatibility with its service. These include:

You can even buy one of these routers with ExpressVPN pre-installed, which may be helpful if you’re not super tech-savvy.

If you don’t have one of these routers, you’ll have to manually set up a router. This can be quite difficult, and is supported by:

You can check out the ExpressVPN support website in order to manually set up one of these routers with the OpenVPN protocol.

Another alternative is to create a virtual router using your Mac or your PC. However, if you already have a Mac or PC handy, there are better ways to share its network connection.  Creating a virtual router takes some serious technical skills, and it’s not exactly convenient. If you’re interested, ExpressVPN has a comprehensive guide here.

If you don’t want to use a virtual or physical router, don’t worry. Next up, we’ll discuss two alternative methods to get American Netflix on Apple TV that don’t require you to buy a new router, and are easy to set up.

All you’ll need to get started are the following things:

Before you get started, you’ll need to sign up for ExpressVPN and download the ExpressVPN client onto your PC.

The installation process is self-explanatory. Just download the Windows version, run the .exe file from the downloaded location, and sign in with the account information that you created when you signed up.

After this, you’ll need to connect to a VPN server of your choice. If you want to watch American Netflix on Apple TV, you’ll need to choose an American server. You can use the server list to view the different available server options.

Press the large “power” button, as seen in the below screenshot, to connect to the server of your choice, and secure your connection.

Now that you have successfully installed the VPN on your PC, it’s time to share it with your Apple TV.

Next, you will open up the “Control Panel” on your PC, and navigate to the section marked “Network and Internet”. You’re looking for “Network and Sharing Center”, which is located in the left-hand menu. 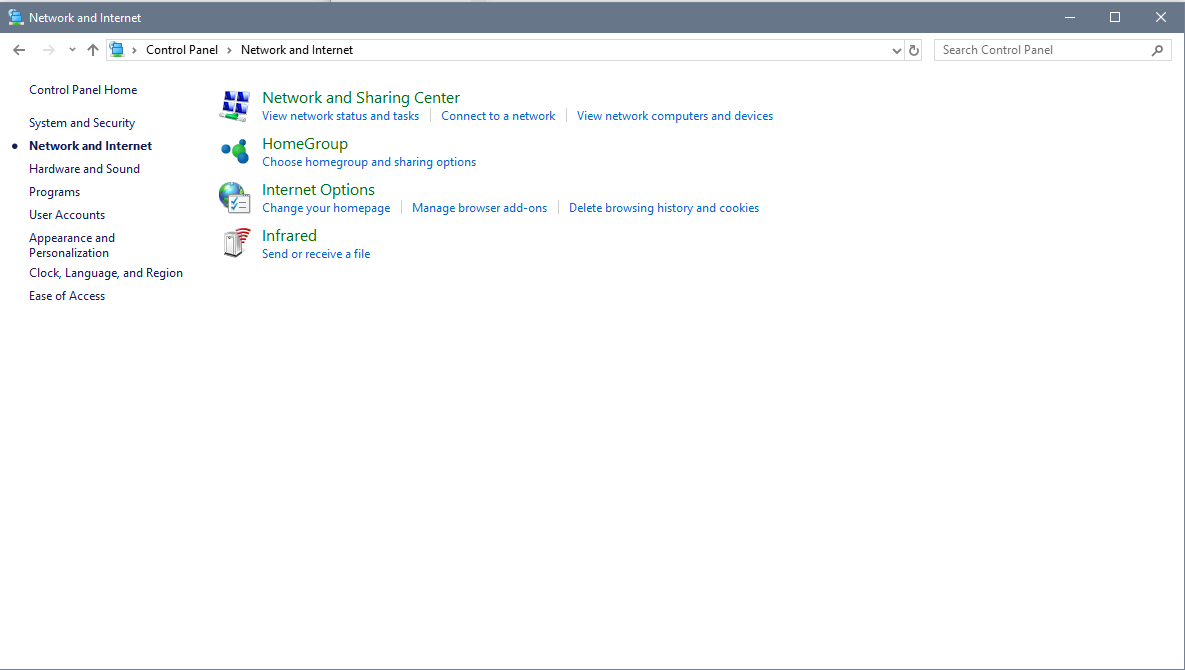 You can also access this setting by typing “Network and Sharing Center” into your Windows 10 search bar.

Once you have opened up the Network and Sharing Center, you need to click “Change Adapter Settings”, which is located in the left-hand side of the window, as seen below.

After this, find the icon with the name of your VPN. In this case, my VPN is called “Unidentified Network” ExpressVPN Tap Adapter.” The name of your network may vary — just look for the one with “ExpressVPN” in the name.

Next, select this network, right-click it, and select “Properties”. After you do so, you’ll see the following menu.

Next, you need to use the “Sharing” tab located at the top next to “Networking” to access the options for sharing your PC’s connection.

You will need to check the box marked “Allow other network users to connect through this computer’s internet connection”, which is likely unchecked by default. Then, select “OK”.

Step 3: Testing the connection on your Apple TV

After finishing these steps, you should be all set up and good to go, with your VPN ready for American Netflix on Apple TV.

Simple plug your ethernet cable into the Apple TV, and make sure that it’s connected to the ethernet cable, not your Wi-Fi network. Navigate to any app, like Netflix, and confirm that the connection is working. Congratulations, you’re done!

Don’t have a PC? Don’t worry! Unsurprisingly, macOS devices like Macbooks, the Mac Pro, and the Mac Mini can also share their internet connection with your Apple TV. Here’s what you need to get started:

To begin, you’ll need to install and set up the ExpressVPN client. Head over to the ExpressVPN downloads page after signing up, and download the application. Install the .dmg to your Mac, and then run the program.

Once you run the program, you’ll see the following screen:

Click “Sign In” to get started. Enter the authentication code you were given when you signed up for ExpressVPN, and complete the setup process.

After you finish setting up ExpressVPN, you’ll see the following screen, which is identical to the PC version.

Next, you will need to plug one end of your ethernet cable into your Apple TV, and the other end into your Mac. If you have a newer Mac, you will likely need a USB-A- or USB-C-to-ethernet adaptor to connect your computer.

Choose “Internet Sharing” from the list of checkboxes that appears on the left of the window, as seen in the below screenshot.

From the drop-down menu, select “Share your connection from:”, and choose “Wi-Fi”

Then, in the “To computers using” menu, select “Apple USB Ethernet Adapter, or “Ethernet”, depending on whether or not you needed to use an adapter.

Step 3: Testing the connection on your Apple TV

After you have turned on Internet Sharing, your internet connection will be available to your Apple TV. Turn it on, make sure that the ethernet network is selected, and open up Netflix or another application. If you’re able to connect to the internet, you’re good to go!

Why Can’t I Use A SmartDNS On Apple TV?

In the past, SmartDNS services were very popular on Apple TV for unblocking geo-restricted content like American Netflix. In fact, ExpressVPN’s SmartDNS, MediaStreamer, was very popular on the Apple TV.

But times have changed. A few years ago, companies like Netflix became aware that people outside of the US were accessing American Netflix using SmartDNS and VPNs.

Because connections through a Smart DNS are not encrypted, they are almost always blocked immediately when trying to access Netflix content.

That’s why a VPN should be used instead. Because it uses secure encryption that avoids Deep Packet Inspection (DPI), ExpressVPN is a much better alternative, and won’t be blocked, unlike DNS services.

Why am I Being Blocked from Connecting to American Netflix with My VPN?

VPNs are not totally immune to being blocked by Netflix. If the Netflix service notices a lot of different connections coming from a single server, it assumes that this is a VPN. The IP address may be “blacklisted” and prevented from connecting.

If this happens to you while using ExpressVPN, don’t worry. You just need to swap servers. You can try a few different ones using the ExpressVPN client. If you can’t find one that works, contact customer support, and ask them which one to use. ExpressVPN always has at least one server that works with American Netflix.

The quickest way to get into contact with ExpressVPN’s customer support is through the live chat. You’ll find that option on the bottom-right of their website with a green tab. Once you open up the live chat, you’ll need to give the customer service representative the email address you used when creating your account. Afterward, he or she will tell you which server works.

ExpressVPN regularly rotates which server works with Netflix, so anticipate having to do this process more than once. You’ll likely find this is also the case for other streaming services ExpressVPN unblocks as well.