Think you’ve exhausted your Netflix library? Think again. Regardless of which country you live in, you only have access to a fraction of the entire Netflix library. There are a number of rare films on Netflix; you’re just not looking in the right place to find them.

We’ve dug deep into international Netflix waters, revealing a rather interesting truth: Netflix has over 14,600 shows in its library right now, but even the United States, the largest Netflix region by far, has access to just over 5,300 titles.

Do the math. That’s just 36 percent of what Netflix actually offers as a whole. So what’s hiding in the dusty shadows of the Netflix library? More hidden gems than you can shake a Fire TV stick at.

Using the amazing database tools over at uNoGS, we did a search through the international Netflix library, looking for movies that fit two criteria:

In total, our search actually revealed nearly 70 movies. We chose to look into half of those in more detail, focusing, in particular, on which countries seemed to be getting all the great stuff. Here are the movies we pinpointed (if all countries do not show for you, scroll at the bottom, change the order, or click on “show data” to see the full list):

Our list is a mixture of movies new and old, some classics, others modern hits. All are well-received on IMDb and definitely worth the viewing experience. Interestingly, a few patterns emerged in the data as to where these movies are located.

First, no one country really has a monopoly on unique content. There were nearly 100 countries on the list, and no country has more than 9 out of these 30 hit films. So, unfortunately, there’s no real hotspot for hidden content gems.

That said, certain geographic regions appear to attract more favorable films than others:

As you can see from the chart, the real hotspots appear to be Europe and the Pacific Islands, where many of these films can be located. The Caribbean Islands as well appear to be a good place to find rare films. This raises a few obvious questions. Why, for example, are so many European countries and Pacific Island nations, ostensibly with smaller libraries, getting high-rated content, in general, that’s failing to make it to most of the other regions?

The answer is likely something only Netflix and its internal licensing agreements could tell us, but we can infer from this is that content licensing remains amazingly complex.

Secondly, we mentioned earlier that no country has access to the full Netflix library. Consider the following chart which shows what percentage of the full Netflix content library different countries have access to: 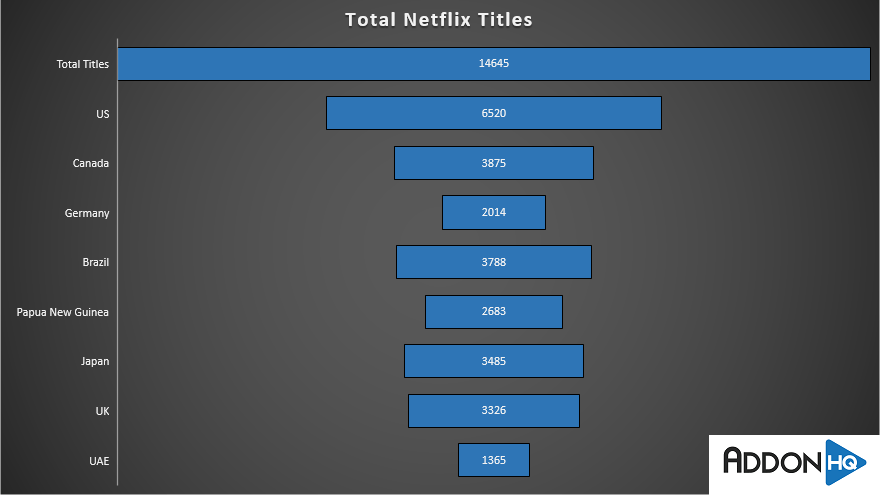 Again, this is an unfortunate result of the complexity of content licensing, the current Netflix content model that appears to be disadvantaging both Netflix and its customer base.

There are two ways to access the entirety of the Netflix library. One is to travel to every country. Fun, but not exactly a reasonable solution for most. For the rest of us, the best solutions through a virtual private network.

VPNs are a bit of an ace in the hole for those wanting to maximize their Netflix experience. The key benefit to VPNs is their ability to get past geographic content blocking, the sole reason why you can only access a fraction of the Netflix library. Netflix is only partially to blame for this. The main reason why they implement content blocking measures is due to the complexity of licensing agreements.

Technically speaking, using a VPN to get around content blocking is against the company’s Terms of Use agreement:

“4.3. You may view a movie or TV show through the Netflix service primarily within the country in which you have established your account and only in geographic locations where we offer our service and have licensed such movie or TV show. The content that may be available to watch will vary by geographic location and will change from time to time. The number of devices on which you may simultaneously watch depends on your chosen subscription plan and is specified on the “Your Account” page.”

That said, this is something that’s difficult for Netflix to enforce. Travelers with Netflix accounts are unlikely to have their accounts shut off when viewing Netflix in different countries. And given the number of people likely already using VPNs and other proxy methods to get past content blocking, Netflix is not likely shut down user accounts. To date, their sole method to prevent this has been to block VPNs or proxy services, resulting in an error message for the user.

However, not all proxy services are blocked. We’ve tested a few popular services, discovering that several still do work with Netflix. This places Netflix between the proverbial rock and a hard place. On the one hand, the company is devoted to growing its library — and therefore its subscriber base — with excellent content. On the other hand, the majority of that content is going to have to come from licensing agreements.

Netflix could try to go it alone, producing its own content (movies, films, etc.). This is what HBO does. Their HBO Now streaming service is considered among the top competitors. But really, it isn’t. HBO Now only has 800,000 subscribers,  compared to the 9 million for Hulu and the 70 million for Netflix. An entertainment media company can only go so far with its own content before it has to bite the bullet and make a few compromises.

In all likelihood, Netflix will continue to turn a somewhat blind eye to the VPN problem, while trying to placate both its increasingly frustrated users and its discontent content providers, neither of whom are really getting exactly what they want out of the service.